After winning her Best Actress statuette, McDormand turned her attention to the rest of the female nominees in attendance, with a big ask for the future. 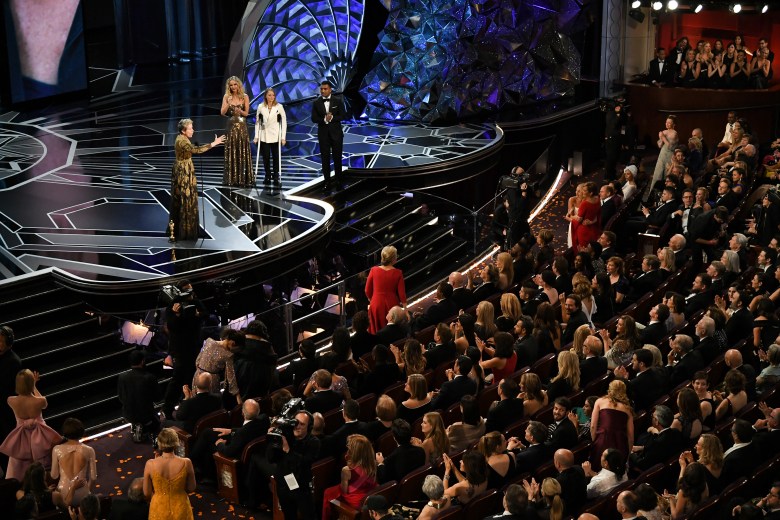 As ever, Frances McDormand had something to say. When the actress took the stage at the 90th annual Academy Awards on Sunday night to accept her award for Best Actress for her work in “Three Billboards Outside Ebbing, Missouri,” she prepared the room for what was to come. “I’m hyperventilating,” she said. “If I fall over, pick me up because I’ve got some things to say.”

The characteristically tart-tongued actress began with a loving tribute to her family and friends, including husband Joel Coen and their son Pedro. But she put down her statuette and got to the heart of the matter. “And now, I want to get some perspective,” she said.

McDormand then asked every female nominee in the room to stand up, joking to fellow nominee Meryl Streep, “Meryl, if you do it, everybody else will.” Soon, McDormand was joined by a slew of other nominees, from her Best Actress compatriots to Best Cinematography nominee Rachel Morrison and Best Director nominee Greta Gerwig.

“Look around, everybody, look around, ladies and gentlemen, because we all have stories to tell and projects we need financed,” she said. “Don’t talk to us about it at the parties tonight, invite us into your office in a couple days — or you can come to ours, whichever suits you best — and we can tell you more about them.”

“I have two words to leave with you tonight, ladies and gentlemen: inclusion rider,” McDormand concluded, referencing a need for Hollywood to build inclusion and diversity into their actual contracts.

It’s an idea that’s already begun to dominate groups that have sprung out of the #MeToo era, including the Time’s Up group, which is using its platform to push for collective bargaining for parity in the industry. It’s also a reflection of the next step in the system’s evolution, pushing conversation into actual change.

Asked about her comments backstage, McDormand was eager to enlighten. “I just found out about this last week, there’s always been available to everybody that does a negotiation on a film, an inclusion rider, which means that you can ask for and/or demand at least 50 percent diversity in not only the casting, but also the crew,” she said. “The fact that I just learned that, after 35 years of being in the film business, we’re not going back.”

The actress also nodded directly to the work of Time’s Up and their legal defense fund. She said, “I think the message we’re getting to send to the public is that we’re going to be one of the small industries that try to make a difference. And I think $21 million in the legal defense fund is a great way to start.”

McDormand was the most outspoken of the evening’s winners when it came to issues regarding sexism, #MeToo, and Time’s Up, though solidarity between Hollywood’s women was a running theme throughout the evening.

Of course host Jimmy Kimmel found time for plenty of jokes about Harvey Weinstein during his opening monologue, but elsewhere, some of the industry’s biggest names made their allegiances evident, from the introduction of Best Actor by Helen Mirren and Jane Fonda, Emma Stone singling out sole female Best Director nominee Greta Gerwig when announcing that award, and Jodie Foster and Jennifer Lawrence taking the stage to announce that it was a new day before they presented the Best Actress award to McDormand.

Most notably, the show played home to a special segment featuring Ashley Judd, Salma Hayek, and Annabella Sciorra, who have accused the disgraced Hollywood mogul of sexual abuse.

“The changes we are witnessing is being driven by the powerful sound of new voices, of different voices, of our voices, joining together in a mighty chorus that is finally saying, ‘time’s up,'” said Judd. “And we work together to make sure the next 90 years empower these limitless possibilities of equality, diversity, inclusion, intersectionality. That’s what this year has promised us.”

This Article is related to: Awards and tagged Frances McDormand, MeToo, Oscars, Time's Up