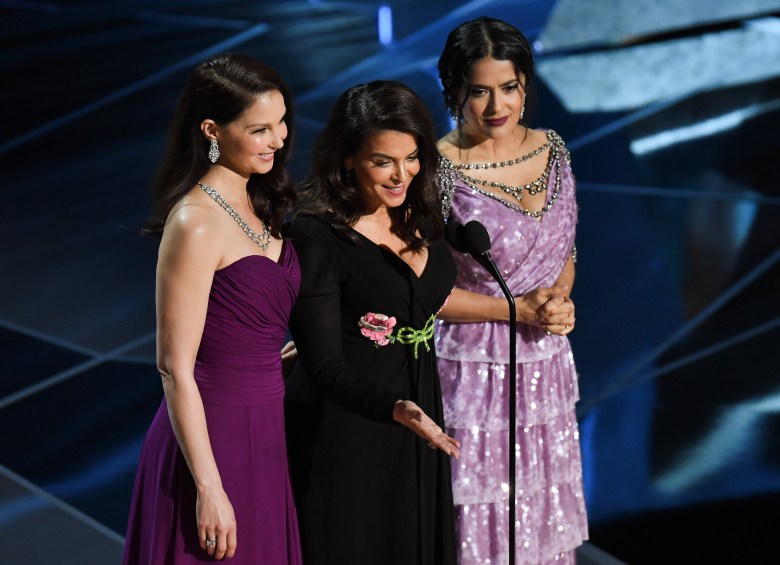 Time’s Up was officially recognized at the Academy Awards tonight in a segment introduced by Ashley Judd, Salma Hayek, and Annabella Sciorra — all of whom have publicly accused Harvey Weinstein of sexual misconduct. “This year many spoke their truth and the journey ahead is long, but slowly a new path has emerged,” Sciorra said.

“The changes we are witnessing is being driven by the powerful sound of new voices, of different voices, of our voices, joining together in a mighty chorus that is finally saying, ‘Time’s up,'” added Judd. “And we work together to make sure the next 90 years empower these limitless possibilities of equality, diversity, inclusion, intersectionality. That’s what this year has promised us.”

Featured in the video itself are, among others, Dee Rees, Ava DuVernay, Sarah Silverman, Kumail Nanjiani, Lee Daniels, Greta Gerwig, Mira Sorvino, and “Moonlight” writer/director Barry Jenkins, who talks about “Wonder Woman.” “Everyone is getting a voice to express something that has been happening forever, not only in Hollywood but in every walk of life,” Sorvino says.

This year’s ceremony, the 90th, took place at the Dolby Theatre in Hollywood with Jimmy Kimmel hosting for the second year in a row.

This Article is related to: Awards and tagged Annabella Sciorra, Oscars, Time's Up