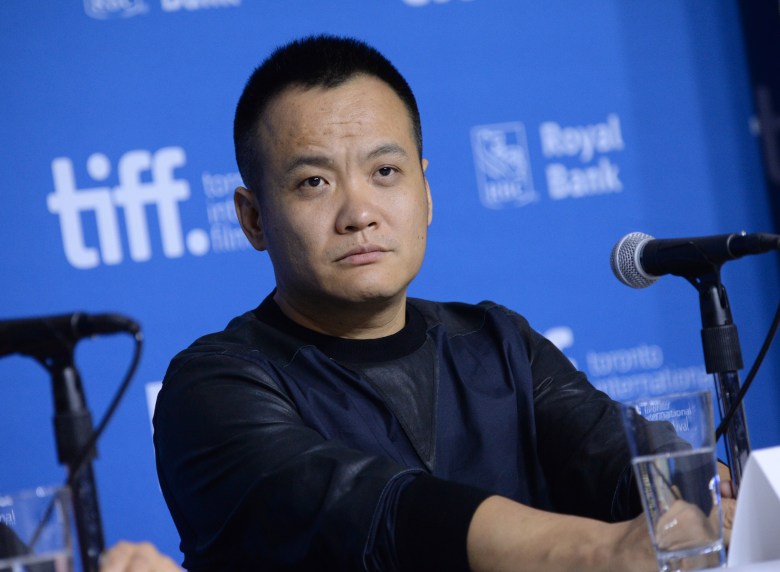 UPDATED (March 18): The “Crazy Alien” production team released the following statement in response to the controversy:

We sincerely apologize for any animals that were mistreated on our set. We always strive to treat all cast and crew, human or animal, with the utmost respect, and are deeply troubled by the reports of an animal in distress on our production. There is no excuse for any failure to fully account for the welfare of any animal brought into a film, and we will be conducting a full review of our live animal practices and safeguards going forward.

We also welcome this opportunity to open up a much-needed dialogue on live animal film practices in China.

We have reviewed the footage and discussed the shoot with cast and crew who were present, and hope that the following details can help address at least some of the concerns that have been raised regarding these scenes:

There were two shot set-ups for the dog in the reported scene. In the first, the dog is just supposed to be suspended in the air, safely in the cage. This was controlled using a wire harness and was completed without issue.

In the second set-up, the dog and cage are supposed to move up and over the water, without submerging. The first time this set-up was attempted, the height was miscalculated and the cage fell into the water. Then, before fully diagnosing the mechanical problem, a second take was requested. This was a mistake. The dog’s welfare should have been paramount, and any potential risks should have been diagnosed and eliminated before the dog was again called upon to undertake the scene. We sincerely apologize.

Following a second failure in this shot set-up, the crew changed plans and shot an empty cage falling into the water. This scene will eventually be composited as a CG shot.

Despite mistakes in filming, the dog was well cared for on set. Its owner was present throughout the filming, and full accommodations were provided for its comfort and safety. Nevertheless, no explanation can excuse any distress caused to this innocent animal on our set, and we are deeply sorry.

People for the Ethical Treatment of Animals is demanding that a scene be cut from an upcoming film starring Matthew Morrison (“Glee”), alleging that a German Shepherd was abused on its Chinese set. “Crazy Alien” is the last installment of a comedic trilogy from director Ning Hao, best known for “Breakup Buddies,” a feature that earned $189 million at the global box office.

PETA Celebrity Media Officer Moira Colley told IndieWire that a “Crazy Alien” crew member recently passed along footage of a troubling incident that occurred on November 28, 2017. In grainy footage (see below), the 50-second clip shows an occupied cage being lifted high above ground, then flung forcefully into a nearby river. The crew member said the stunt was meant to simulate the animal’s abduction by extra-terrestrials, and was repeated at least once.

“We’re going to be calling on the director to commit to never working with live animals again, we’re going to call for the scene to be cut from the movie, we have a number of things that we’re planning to do as a result of this, because it’s horrifying,” said Colley, who added, “There are no laws preventing this kind of thing from happening in China like there are in the U.S.”

Morrison’s casting was first announced in August. The whistleblower told PETA that the Tony and Emmy-nominated actor was absent that day from the set, located in Changsha, Hunan province’s capital city. On camera, Morrison will speak English, and his dialogue will be accompanied by Chinese subtitles.

Colley relayed the following statement from the crew member: “[T]he cage was completely submerged with the dog in it landing in a 10 mph current. After five to eight seconds the director yelled out, ‘Cut.'” When the Hao requested a second take, the whistleblower said, “I could not believe my eyes.”

Dirty Monkey Films Group and Huanxi Media are currently in post production on the film, which is scheduled for release in China on February 5, 2019.

This Article is related to: Film and tagged Crazy Alien, Matthew Morrison, PETA