Fifteen years after its original premiere on Bravo, "Queer Eye for the Straight Guy" may have changed titles, but it's still living in the past. 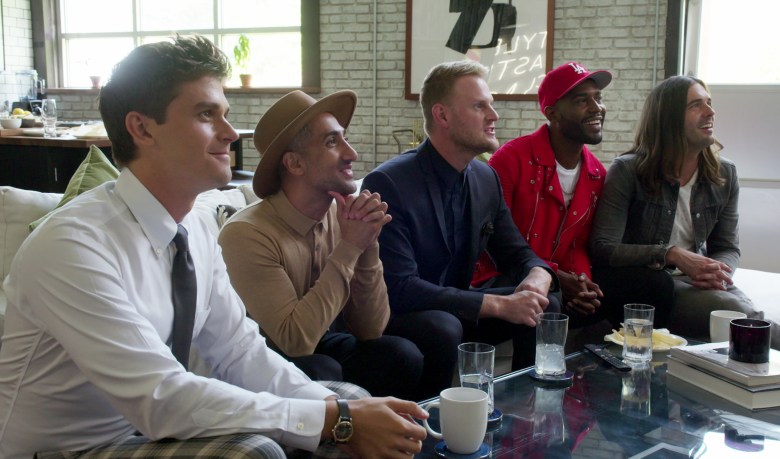 When the original “Fab Five” debuted in 2003, it was a smash hit that announced Bravo as the reality TV behemoth it is today. Led by the dynamite Carson Kressley, the show succeeded due to a clever premise, its debut during the advent of reality TV, and the dearth of gay people onscreen. In 2003, seeing five gay men on one show was nothing short of groundbreaking. Netflix launched a reboot with an all-new cast earlier this year, eschewing the second half of the Bravo title for the leaner “Queer Eye” — but it kept what was disingenuous.

Originally a pejorative, the reclaiming of “queer” can be traced to the activist group Queer Nation, which was founded in 1990 by members of the HIV/AIDS advocacy group ACT UP. Its origins made it more of a political label than a sexual identity, a connotation it maintains to this day. “Queer” eventually evolved into a gender neutral term for LGBT people of all stripes: It was easier to say, and included the vast spectrum of gender representations. However, plenty of LGBT people do not identify as queer, hence the acronym’s amendment to LGBTQ.

While it’s never good practice to assume someone’s identity, positioning five cisgender gay men as the standard-bearers of queerness in 2018 is regressive and reductive. Netflix couldn’t find a transgender guy with a flair for pattern mixing and bow ties? Or a butch lesbian contractor to do the heavy lifting on the home makeovers? How about a non-binary person who pairs fabulous heels with their five o’clock shadow? If queerness at its core aims to decenter whiteness, “Queer Eye” took minor strides there. Up from the original singular Latino Jai Rodriguez, there are now two men of color this time around: Tan France and Karamo Brown. Karamo and Antoni with Tom.

Semantics aside, this distinction would be less important if “Queer Eye” were not smugly selling itself as a bastion of progressiveness. In one of the show’s most manipulative stunts, Karamo, who is black, is driving the Fab Five to their next destination when they are pulled over by the police. Karamo does not have his license on him, and the cop has him step out of the car. After a few minutes of panic, the cop reveals the whole thing is a big joke, and he is the one who nominated his friend for a makeover — a Trump-voting cop named Cory. Later, the show forces a stilted conversation between Karamo and Cory that ever so slightly touches on police brutality and racial profiling. Cory admits that excessive force is bad, and Karamo manages to say something about the value of listening to others’ perspectives.

Producers who think they’ve earned inclusivity points by Karamo’s casting deserve major side eye for making him play nice with a white cop, given that black people are three times more likely to be killed by police than white people. Such botched attempts at political statements open “Queer Eye” up to harsher criticism. If it simply billed itself as a makeover show for men by men — which is exactly what it is — its faux-progressivism would be more palatable.

The “Queer Eye” reboot has been universally well-received. While Netflix does not release ratings of its shows, the sheer number of think pieces about Antoni Porowski’s questionable cooking skills are proof enough that people are watching. Which means that “Queer Eye” is popular with straight audiences. (Antoni certainly is.)

Which brings us to the great tease of the show’s best episode, “To Gay or Not Too Gay?,” in which the Fab Five make over a hunky gay guy named A.J. and help him come out to his stepmom. The episode offers a utopian glimpse at what LGBT media could be if it didn’t have to worry about appealing to straight audiences. The Fab Five are their loosest, funniest, and most relaxed as they help A.J. unpack his fears of appearing “too gay” or wearing his clothes too tight. Though the show is far too polite to use a term like “internalized homophobia,” it’s nice to imagine a version of the series where A.J. is only the beginning.

But that would not serve a mainstream outlet like Netflix. Why should Netflix make a show that appeals solely to a group whose immense talents it relies upon, when it gets so much more mileage out of using gay men as magical unicorns to jazz up the lives of clueless straight men? The saddest thing is that LGBT audiences, starved for real representation, swallow this watered-down version of queerness in the absence of any media that speaks directly to their experiences in any meaningful way.

As Tan says in the first episode: “The original show was fighting for tolerance. Our fight is for acceptance.” That’s not very far to go in 15 years. The Merriam-Webster dictionary defines acceptance as: “The action or process of being received as adequate or suitable, typically to be admitted into a group.”

Is that all queer people can hope for in 2018? Acceptance? No, thanks. We’ll take celebration, adoration, exaltation, and a whole bunch of better TV shows.

This Article is related to: Television and tagged Netflix, Queer Eye