Following in Dave Chappelle's footsteps, Gervais compared gender transition to identifying as a chimp in a longwinded tirade couched as an explanation. 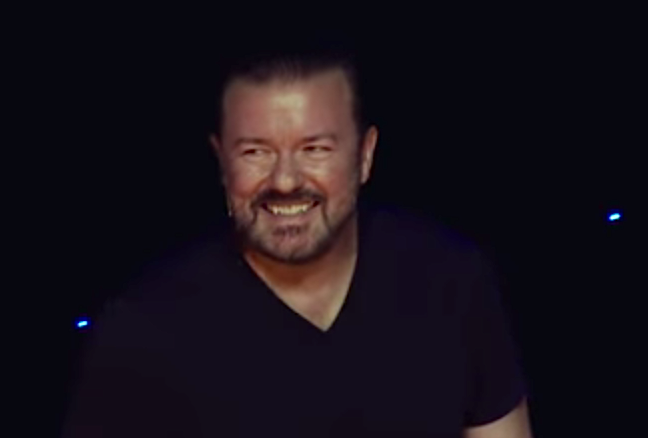 Ricky Gervais’ new Netflix special, titled “Humanity,” opens with a joke about dogs that can smell AIDS, and only goes downhill from there. The British comedian and creator of “The Office” doubled down on transphobic remarks he made about Caitlyn Jenner while hosting the 2018 Golden Globes, repeatedly using her former name, referring to her as a man, and discussing her genitals and surgery. He did all this while wearing a smug grin and claiming to have a “liberal, progressive attitude” about transgender people.

Gervais leads into the Jenner bit by telling three rejected jokes that he nixed from the Golden Globes because they would be too offensive. After each joke, he slyly adds: “I’d never tell a joke like that, it’s horrible… I didn’t do it, so you’re getting offended at a joke that doesn’t exist.”

He applies similar self-righteous logic to his next tirade, when he uses Jenner’s former name and male pronouns when discussing her past. “I’d never dead-name her now, but this is like a flashback,” he says, using the term for a transgender person’s assigned birth name. Gervais lauds himself for engaging with his critics, who taught him the word “dead-name,” and explained to him why using Jenner’s was offensive.

Gervais reminds the audience of how he opened the Golden Globes: “I’ve changed. Not as much as Bruce Jenner. Now Caitlin Jenner, of course, and what a year she’s had. Became a role model for trans people everywhere, bravely breaking down barriers and destroying stereotypes. She didn’t do a lot for women drivers.”

“That’s a clever joke, and I’ll tell you why,” says Gervais. “It’s layered. The subject of that joke is stereotypes, I’m playing with the notion of stereotypes. So, I start off saying, ‘She’s a real woman.’ Some would say, a liberal progressive attitude.” (Gervais seems to think acknowledging a person’s identity is progressive).

He then launches into one of the most common and insidious arguments used by conservative and religious groups to deny transgender people basic human rights. “I’m not one of these bigots, who think having all that done is science gone too far… In fact, I’ve always identified as a chimp. Well, I am a chimp. If I say I’m a chimp, I am a chimp. And don’t ever dead-name me, from now on you call me Bobo. I’m going to have species realignment.”

This is the exact same logic used by opponents of same-sex marriage who claimed people would start marrying animals if it became legal, made by a man who claims he is “progressive” and “not a bigot.” The most dangerous part of the whole thing is that his audience likely thinks of themselves as liberals, too, as they cheer and clap for a chimp impression that equates transgender people with monkeys. Thanks to Netflix, billions of people around the world now think they can justify their hate with mediocre jokes as well.

This Article is related to: Television and tagged Caitlyn Jenner, Netflix, Ricky Gervais