Producer Jason Katims ("Friday Night Lights") also discusses why he was ready to return to high school, and Perez reveals the reason she avoided TV until recently. 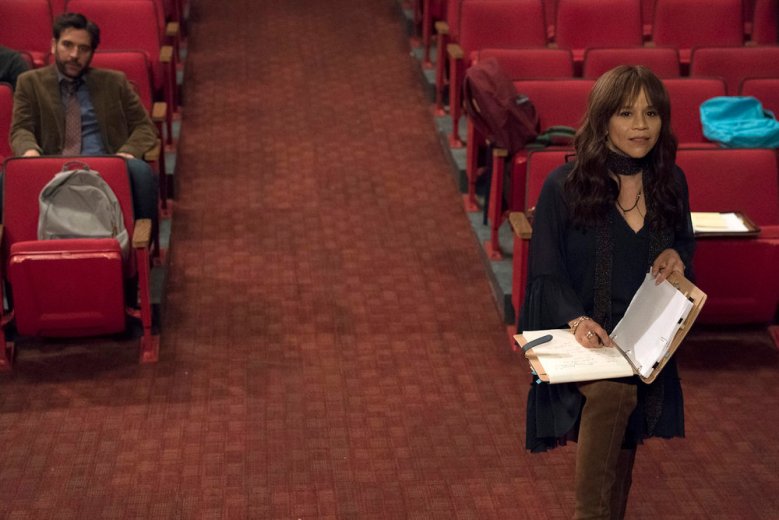 NBC’s new drama “Rise” stars Rosie Perez as a high school teacher who struggles with being pushed aside when another teacher, played by Josh Radnor, makes a play for her job as head of the theater department.

Perez and Radnor’s characters, Tracey Wolfe and Lou Mazzuchelli, eventually form an alliance, for the sake of the kids hungry to be challenged by putting on an ambitious musical — but the fact that Perez’s character, a Latina woman, is passed over by a white man is extremely timely in this age of “Time’s Up” and #MeToo.

“I think for her to get passed over in the way that she was passed over hurt to her core,” Perez said of Tracey. “This was her dream to run the department. It stings that a middle-aged white guy gets the job, not the Latina woman. That’s a bitter pill to swallow.”

Showrunner and executive producer Jason Katims (“Friday Night Lights”) said that storyline will continue to resonate throughout Season 1 of “Rise,” and into the future, should the show continue.

“She sees the beauty in what he’s doing and she likes him,” Katims said. “On the other side of that, Tracey very rightfully feels this is unjust, unfair. Both pieces of that can come out. That’s what is exciting to watch. This is a storyline that isn’t put to bed after the pilot or the first couple of episodes, it continues through the season, and will be a dynamic that continues to evolve.”

Added Perez: “With Tracey that bitterness keeps bubbling up every now and then, especially when she feels disrespected by Lou. That’s where the hurt comes through — this is the only thing I have to hang on, and you’re taking it away from me!

“Then you have to pause, its not about me, its about these kids. I have to sit on my pride and take it on the chin and keep moving forward,” she added. “That’s a lot to deal with, knowing you’re more qualified, knowing you’re smarter, knowing you know more about the arts than the other person does. But then yet seeing the other person has this artistic value that can’t be denied. She keeps getting back up. What is it that makes her keep getting back up? I’m still exploring it.”

Beyond that, “Rise” also focuses on the kids who make up the high school in this depressed, working class town. As they aspire to stage a high school version of the Broadway play “Spring Awakening,” they’re also going through their own evolutions. Among the other stars of the show: Auli’i Cravalho, Damon J. Gillespie and Marley Shelton.

Perez and Katims stopped by IndieWire to discuss their inspirations for RISE, including what convinced Katims to return to high school — and why Perez finally started doing TV after years of avoiding the small screen. Listen below! Katims wasn’t looking to replicate his experience with “Friday Night Lights” but did want to find another show that shared some of its themes. When he was approached about “Rise” and read the book that inspired the series, “Drama High” by Michael Sokolove, he knew this was the one.

“The stuff that I loved about doing ‘Friday Night Lights’ was observing this small town and doing it in a way where this was not a privileged world, this was a working class place. There was something about this story that reminded me of it in a good way. This was a different world, it’s not Texas and its not football. But i thought I could bring something to it.”

“My first TV experience, it was so bad,” Perez said of her experience on the 1990 CBS drama “WIOU.” “I just didn’t feel a creative atmosphere. I felt like we were just pawns to deliver lines. Everyone was telling me, that’s just television. I said, ‘OK, I’m going to stay far away from television!”

But more recently, she dipped her toes back in the TV waters with the Canadian series “Pure,” the UK drama “Bounty Hunters” and a role on TBS’ “Search Party.” When she was sent Katims’ script for “Rise,” she flipped out.

“I don’t watch TV series but I watched ‘Friday Night Lights’ because I’m a sports head,” she said. “And so I love the way that was, so rich and grounded and moody and exciting. I felt I could bring a lot to the character of Tracey Wolfe. My instincts were right, I knew it was going to be good.”

Katims said he was “blown away” with what Perez did with the role.

“I felt like she was working from such a emotional connection into this person,” he said. “Some of the stuff I imagined would be purely comedic from her was comedic, but it was also moving and emotional because it was so deeply felt. I found out she was for the last 26 years doing what Tracey was doing and it’s her passion. That’s why she’s so connected to this character in a beautiful way.”

Perez couldn’t believe that her character on “Rise” would have such a parallel to her own life, working with Urban Arts Partnership, a nonprofit that champions arts-integrated education programs.

“I have this tough exterior but inside I’m very mushy and soft,” she said. “And after I finished reading the book and the pilot, I sat down in my bedroom chair and I looked out the window and I just started crying. My husband goes, ‘what’s wrong?’ And I go, I can’t believe this has happened, that this has come my way. Who would have thought I would get to play a role that I’ve been playing in real life.” This Article is related to: Television and tagged Jason Katims, Podcasts, Rise, Rosie Perez, Turn It On