Drew Barrymore and Timothy Olyphant's Netflix zom-com spends a lot of time treading water with old jokes, but it finds some magic in the end. 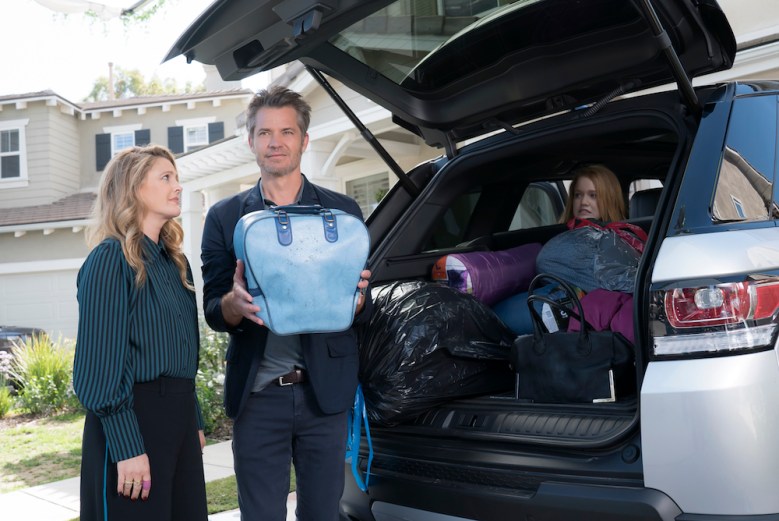 That being said, Season 2 provides more scenes where everyone is asked to face reality. It even culminates with Joel and Sheila deciding to go on the run when they think the law is closing in on them. Before that, they try to save the world from diseased zombie clams (that eat other clams for sustenance). They half-heartedly wrestle with the moral ramifications of what they’re doing — killing people to keep Sheila alive — by dealing with nasty individuals (like a horde of Nazis who become Sheila’s go-to tasting menu) and helping random people they’ve wronged.

It’s not a political statement, by any means, but having Sheila justify who she kills pushes “Santa Clarita Diet” closer to relevancy. There’s too much time spent on gross-out gags and jokes about Sheila’s bloody meal plan, but those start to fade a bit as the season progresses. More importantly, since this is a pretty silly show at heart, Season 2 creates a few outlandish new aspects to its mythology. Sheila and Joel want to understand why she died, who else has been affected, and how they can prevent the disease from spreading. So by the Season 2 finale, you’ve got a show that includes:

That sounds like a pretty fucking weird show, and by the ending, it starts to feel that way. Though largely developed in exposition (and off-screen), Joel has built a meaningful relationship with Gary’s severed head. What they talk about doing together — dipping his head in whiskey, re-watching “The Wire” — alludes to a broader discussion about whether Gary can lead a fulfilling life without his family (and without his body). That’s a much more interesting dynamic to engage with than Sheila and her lopped-off finger or the family and Principal Novak or any number of side plots that only function to gross out the audience or to risk exposing the family’s dark secret.

Let’s talk more about those Ruby Reds and where they came from; let’s get Ruby’s brother into town so we can find out about that cave in Serbia; and if there has to be suspense, let’s spend some time with Sheila’s messed up subconscious and how it reacts to being stressed-the-F out. These are all elements that audiences don’t see very often (or at all) in zombie shows, whether they’re comedies or not. All the blood and guts, body parts and frozen midsections, those can still be a part of the show, but they can’t drive the show any more.

Season 2 edges closer to making you care about these people instead of trying (and often failing) to make you laugh at their mindfully delivered jokes. If “Santa Clarita Diet” is going to succeed with self-awareness, it needs to give Joel and Sheila as many honest, joke-breaking scenes as their daughter (Abby still feels like the only real character on the show), and it needs to amp up the insanity. Netflix is never going to make a four-quadrant zombie comedy with this very particular sense of humor, so why not lean into the creative oddities and make the show stand out for the right reasons?

Based on the finale, Season 3 could get there, and — as depressing as it is to keep saying about meandering, overlong Netflix originals — that’s the most encouraging aspect of Season 2. The last, telling line is delivered by Gary’s head (obviously). Minutes earlier, he was begging for Joel and Sheila to kill him, but then he helped get them off the hook when Anne shows up and threatens to arrest the couple for murder. Sheila tries to prove she’s a zombie, but it takes Gary’s dead head to really do the trick. Anne, the devout disciple of Christ, asks for a sign from God to know she’s doing the right thing, a bomb goes off (likely detonated by Abby and Eric, who were planning to attack a fracking plant that night), and Gary says, “Well, this just got fucking weird.”

He’s right. It just did. That’s the problem with Season 2, but it doesn’t have to stay that way. Lean into Gary’s head. Lean into cannibal clams. Lean into weird.