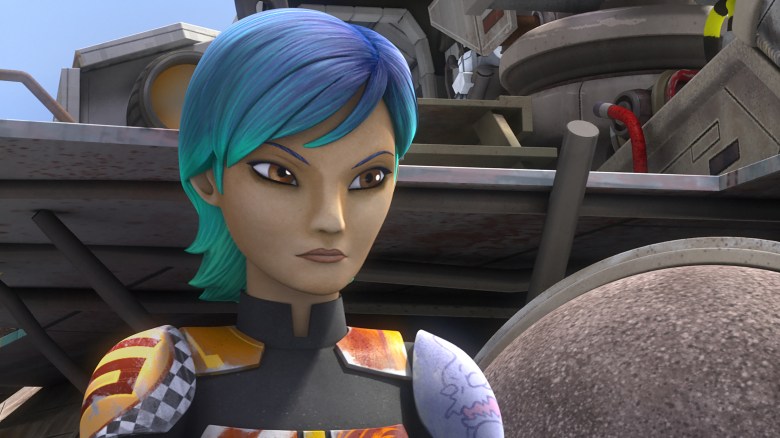 “Star Wars Rebels” just ended its four-season run, but we’re not ready to say goodbye to some of our favorite characters yet. And judging by that last scene in which Ahsoka Tano (Ashley Eckstein) showed up to fetch Sabine Wren (Tiya Sircar) so they could find wherever Ezra Bridger (Taylor Gray) went when the Purrgil jumped through hyperspace, there’s a built-in story to tell right there.

Disney should jump on this spinoff concept right now, if they haven’t already. Who knows? Maybe it’s all under wraps at the moment, but seeing as how there has been no official announcement yet, we’re going to lay out our best arguments as to why this needs to get a greenlight (and no, we’re not talking about a green lightsaber) now.

During the Q&A discussion after the finale screening last week, when the moderator opened up the floor for audience questions, none other than “Scrubs” star Donald Faison took the mic to ask the first.

“Hi, my name is Donald Faison. I’m a huge fan of ‘Star Wars Rebels,’” he said. “How soon can we expect the Sabine Wren-Ahsoka Tano show? I had to run to the bathroom so I didn’t know if you announced it already. You didn’t talk about it when I came back, so I’m asking now. Is that in the works? Is it something that you talked about? Is it something that’s going to happen or was that just a tease for us to wish for, to never happen?”

At the time, “Rebels” co-creator Dave Filoni wouldn’t (or perhaps couldn’t) answer the question, saying that he’s been so busy wrapping up “Rebels” that he hadn’t even thought ahead to break down another plot yet.

“I have this crazy thing. I have to know what the story is about before I tell it,” he said, to which Faison practically screamed, “You know what it’s about! They’re looking for Ezra!”

Filoni’s response gave a little hope to fans. “No, no, no. It’s a bit more than that,” he said. “It’s so clear to you [Donald Faison]. Let’s talk later. We’ll brainstorm between you and I.”

There you have it. Faison is on board for the Sabine-Ahsoka quest, and has thoughts about it. Maybe he can even be a story consultant.

2. It’s About Freaking Time We Got a Woman-Centric Story A “Star Wars” story solely featuring two badass women as its leads (who aren’t the typical white brunettes like Rey and Leia) has been long overdue. Both Ahsoka and Sabine have personality to spare, and their partnership should create an entertaining dynamic.

Plus, their adventure would put a fun, feminist twist on the classic quest tale. Not only would it be two women on a journey, but they’re also going to go save a dude in distress.

3. Ahsoka Is Still One of the Most Intriguing Characters Ever

In “Clone Wars,” Ahsoka was a great foil for Anakin Skywalker and Obi-Wan Kenobi, and in “Rebels,” her very welcome appearances were far too brief and shrouded in mystery. This would be a great opportunity to explore so much more with her, ranging from learning more about the Togruta species to her feelings about Darth Vader. With the exception of Palpatine, she’s one of the few people alive who knew that Jedi as both Anakin and Vader, and realizes that they’re one and the same. That could play out in interesting ways going forward.

4. Sabine Also Has Much More Development Ahead Throughout “Rebels,” Sabine’s storyline has been mostly focused on her struggle with who she is as opposed to her culture and her place in the rebellion. This quest would let her really come into her own as a Mandalorian and reveal more about those people. And even though she gave over the Darksaber to Bo-Katan Kryze, we’d love to see Sabine come in contact with it and wield it again.

5. You Know You Want to See Sabine’s Next Hairdo

Not to reduce Sabine to just fashion, but her ever-changing hairstyle and color has always been a fun part of her and just one outlet for her artistic flair. Speaking of which, she had always seen the galaxy as her canvas, and getting to jaunt around with Ahsoka to different worlds in search of Ezra will offer a lot of opportunities to leave her mark.

While Ezra Bridger is a fascinating and complex character, one given to darkness at times, we’re not in a hurry for Sabine and Ahsoka to find him if that means the end of their quest. That said, now that we know for certain that he is not destined to become Snoke, we’d love to hear what other sorts of stories crop up about him while he’s off who-knows-where doing amazing things. For example…

7. Playing With the World Between Worlds This mysterious mystical plane connects all of space and time, and Ezra found himself there after accessing it from the ancient painting of the Mortis Gods that decorated the exterior of the planet Lothal’s Jedi Temple. The few times Ezra has been here, he’s had the option of changing moments in time, or at least choosing an alternate path, such as when Palpatine tempted him with a life in which his parents hadn’t died.

It’s very likely that there are other portals into the World Between Worlds throughout the universe, and this opens up possibilities for so many stories. In regards to Ahsoka, when Ezra pulled her out just moments before Vader was going to kill her, does that mean she may have died in an alternate timeline? Or was she destined to survive all along? These hyperspace-jumping space whales are still relatively unknown to viewers. Although they were instrumental in helping Ezra with the Liberation of Lothal, it’s not clear exactly why they did it or even where they ended up afterward. Another series could dive into what they are, if they’re more than animals and, if so, what their culture is like.

What we really enjoyed about “Rebels” (and to a lesser degree in “Clone Wars”) was how the series shone a light on parts of the galaxy that we never see in the films and how the huge events in the films affect the average person. There’s a tiny bit of this in “The Last Jedi,” but there was too much story to service to really get into it. Both Ahsoka and Sabine have a history of caring for and championing the little guy on the sidelines, so this would fit in perfectly with their world-hopping quest.

That being said, “The Last Jedi” did introduce us to a new creature, and while Porgs are adorable and are welcome anytime, anywhere, we really want to put in a plea for the return of the female Caretakers of the Lanai species, aka the Fish Nuns. It would not be outside the realm of their quest for Sabine and Ahsoka to end up on the ocean planet of Ahch-To, which is the site of the first Jedi Temple.

We love everything about the fish nuns, from their piscine features to their placid personalities. But most of all, we love how “The Leftovers” and “Lost” creator Damon Lindelof has embraced them as a meme. He must be encouraged to continue.

This Article is related to: Television and tagged Disney XD, Star Wars Rebels