Stanley Tucci and Addison Timlin are both terrific in a frustrating sexual harassment drama that chickens out by trying to be provocative. 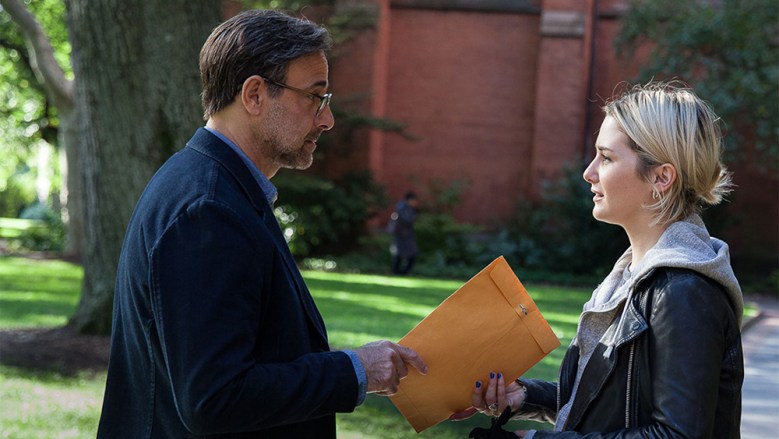 Ted Swenson (Stanley Tucci) is a living cliché, and he knows it. A middle-aged writer with one “moderately successful book under my belt” (his words, via Tucci’s jaunty voiceover), Ted thought that a teaching job at a Vermont liberal arts college would be the perfect short-term gig while he penned his second novel. Ten years later, tenure is the only thing Ted has to show for his time.

At least, that’s how he feels about it — a cushy job, a full head of hair, and a healthy marriage (to Kyra Sedgwick) don’t mean a damn thing to an author who can’t make good on the promise of their own potential. He used to want his class to fall in love with him; now he just stares at the clock and hopes to wait out the hour. “When do I get more?” Ted asks one of his students, unusually eager to read more of her work. Her reply couldn’t be more withering or direct: “At this point, probably never.”

That exchange is emblematic of Richard Levine’s “Submission,” a frustrating drama about sexual power dynamics and self-destruction that boasts the literary doublespeak of a great novel but little of its depth. Of course, the same could be said of Ted Swenson, who talks like a major writer but acts like an illiterate moron. An unfulfilled man who’s on the brink of throwing his life away at the slightest hint of attention from a woman half his age, Ted is about to fall for the oldest trick in the collective history of books (tellingly, “Submission” is adapted from a Francine Prose novel called “Blue Angel,” which was itself adapted from a Josef von Sternberg film of the same name, which was itself adapted from a novel, and so on). “Guys are always surprising themselves by doing crazy shit like that,” a student declares, punctuating one of those creaky classroom scene that bluntly foreshadows the rest of the plot. “Even if they don’t think they’re the kind of guy who would do crazy shit like that.”

The sullen, evasive girl in the back of the seminar might still be in college, but she’s already wise enough to recognize that rejection is a hell of a thing, and that an easily flattered man like Ted Swenson is just begging to be knocked off his axis. Her name is Angela Argo (“Little Sister” star Addison Timlin), and while she’s a bit standoffish towards the other students, she absolutely swears by Ted’s novel. That’s all he needs to hear to lower his guard and start privately mentoring Angela on her novel, which — wouldn’t you know it — is about a beautiful young woman who has a steamy affair with her college professor.

It’s too hard to say if Ted is actually rocked by her prose or if he’s just turned on by the possibilities that it portends (though the softcore snippets we hear from Angela’s novel tend to suggest the latter), just as Ted is too hard to tell the difference. Either way, there’s a risk to any such involvement during this time of “heightened consciousness” towards sexual assault on campus, when kids feel unsafe and male teachers have learned not to even meet with female students in private, let alone in their dorm rooms. Ted drunkenly tells his insufferable colleagues that he’s fed up with the world of “safe spaces” and trigger warnings, but maybe those newfangled concepts aren’t just in place to protect students from the faculty, but also men like Ted from themselves.

It goes without saying that “Submission” arrives with more baggage than Francine Prose or Josef von Sternberg (or Vladimir Nabokov, for that matter) ever had to carry. And, for a while, it seems as though Levine’s adaptation is going to be a valuable riff on a crisis that has bubbled up to the surface in the time since its source material was published. Even if the kooky score and bemused voiceover ominously locate us in “American Beauty” territory, there’s something helpful about the fact that this story is told with a lightness of touch; without diminishing the importance of his subject, Levine and his cast are able to texture it with human shades of gray. It goes a long way that both of the leads are perfect for their parts. It’s compelling to watch Tucci push back against his usual smarminess, introducing Ted as a dick and then fighting to make him more sympathetic or pitiable as the character self-implodes. As gross as it is when Ted finally surrenders to his base urges, it’s also just sad to see a fundamentally decent man do something that makes it necessary to define him by his flaws (Levine shoots the inevitable sex scene as a grim spectacle, Tucci’s covered erection and the casualness of Timlin’s naked body only reinforcing the banality of the event).

Timlin, a brilliant and beguiling young actress who has a habit of being the best thing about the movies she’s in, unsurprisingly proves to be an excellent foil for Tucci. Often playing straightforward and elusive at the same time, Timlin creates a transfixing dissonance between Angela’s naïveté and her natural cunning. Of course, just because Angela isn’t necessarily prey doesn’t mean that Ted isn’t a predator, but Levine’s script doesn’t intuit that as well as his cast, the third act using the loaded power dynamic between teacher and student as an excuse not to explore it further.

Not all accusations are equal, but it’s unclear what “Submission” hopes to gain by fueling the deluded fantasy that #TimesUp will inspire opportunistic women to go after “innocent” men. Not only do the film’s last 30 minutes feel like an empty (and borderline dangerous) provocation, they’re also a disservice to these characters, both of whom are far more interesting as flailing people than they are as sociopathic monsters. Even “The Blue Angel” is more evenhanded than this. Levine’s film, much like its protagonist, is guilty of falling into the same trap that it’s trying to avoid: Like a time-traveler who sets into motion the same fate they’re trying to undo, “Submission” is so desperate not to become a cliché that it ultimately wastes a golden opportunity to become something more.

“Submission” is now playing in select theaters, and expands to more cities on March 9.