At this year's festival, 33% of all feature films are directed by women. Here are the ones we're most excited to see. 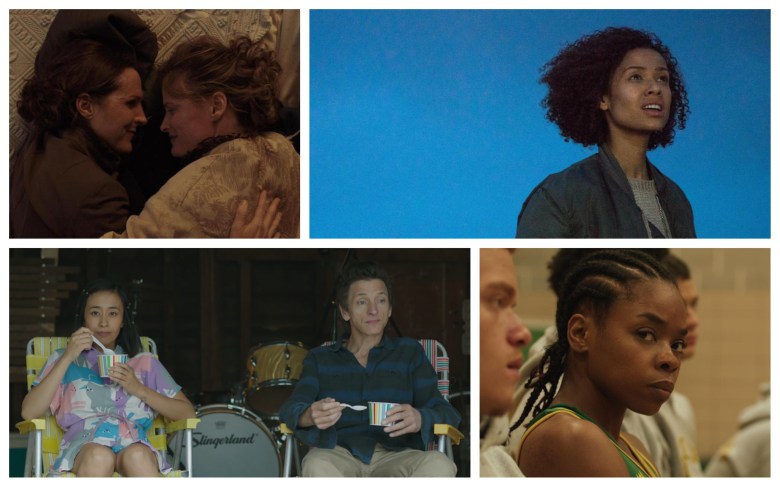 While Hollywood continues to struggle towards parity in the director’s chair, the film festival world is playing major catch-up. At this year’s SXSW Film Festival, the push towards parity is becoming more of a reality than ever before, as 33% of all feature films at the fest are directed by women, while the shorts section boasts 59% female directorship across its slate. It’s a stark difference to the studio side of the industry.

The USC Annenberg Inclusion Initiative’s latest study, “Inclusion in the Director’s Chair? Gender, Race & Age of Directors across 1,000 films from 2007-2017,” found that, of the 109 film directors associated with the 100 top movies of 2017, 92.7 percent were male; 7.3 percent were female. Days later, the San Diego State University’s Center for the Study of Women in Television and Film followed with the “Celluloid Ceiling” study, finding that women comprised just 18 percent of all directors, writers, producers, executive producers, editors, and cinematographers working on the top 250 domestic grossing films. That number remains mostly unchanged over the last two decades.

At SXSW, the landscape is very different. Below, we’ve picked out 14 titles from female filmmakers to check out at this year’s SXSW, and though our focus is on new premieres, the fest will also play home to a number of films that have screened elsewhere, including “The Rider,” “Half the Picture,” “Outside In,” and many more.

Initially titled “The Pact,” “Pitch Perfect” and “30 Rock” writer Kay Cannon will make her directorial debut with a film that sounds destined to enter the sex comedy hall of fame. Centered on a trio of parents who discover — much to their absolute horror — that their teen daughters have made a pact to lose their virginities on prom night, the comedy follows the group as they try to stop the plan from panning out, any way they can. The film stars Leslie Mann, Ike Barinholtz, John Cena, Kathryn Newton, Graham Phillips, June Diane Raphael, Hannibal Buress, and Sarayu Blue. Its first red-band trailer sells the high jinx, but also leans heavily into the bond between long-time pals (aww) along with plenty of deeply misunderstood teenspeak and Cena again proving his salt as a comedy MVP. Julia Hart knows talent when she sees it. Her previous SXSW effort, the alternately daring and darling “Miss Stevens,” featured breakout parts for both Lily Rabe and a pre-“Call Me by Your Name” Timothee Chalamet, and her newest film features similarly great — emerging and reliably good — talents in front of the camera. Gugu Mbatha-Raw stars in the film as a woman with supernatural (superhero?) abilities who is forced on the run, which sounds precisely like the kind of female-focused action vehicle that audiences are hungry to see. She’s joined by David Strathairn, Lorraine Toussaint, and Christopher Denham in a feature that just might pack some of the festival’s biggest surprises.

Another SXSW offering that packs one hell of a cast: Megan Griffiths’ very intriguing “Sadie,” which stars indie stalwarts like Melanie Lynskey and John Gallagher Jr. alongside “Lane 1974” breakout Sophia Mitri Schloss as the eponymous Sadie. The drama entangles the trio as Sadie struggles with her mother’s (Lynskey) relationship with a new man (Gallagher), as her beloved father is deployed in a war zone. Sadie’s tactics for ending the bond aren’t funny or silly — Sadie is no regular teen — and the film should speak to Griffiths’ ability to mine odd scenarios for maximum drama (think: “The Off Hours” or “Eden”) without hanging on tired tropes.

“Country Strong” director Shana Feste returns to the big screen for her first film since her 2014 “Endless Love” remake with a story that puts family matters front and center over her usual romantic fare. The cast alone make it notable: Vera Farmigia and Christopher Plummer playing an estranged father and daughter, with “A Monster Calls” standout Lewis MacDougall on board as Farmigia’s cute kid. The film follows Farmigia and MacDougall when they’re drafted into uncomfortable service to Plummer’s character, tasked into driving him cross-country when he’s kicked out his nursing home. We’re guessing plenty of boundaries are going to be crossed along the way. Eight years after making her award-winning short of the same name, filmmaker Olivia Newman has finally been able to turn her tale of a female high school wrestler into a full-length feature. The story follows young Monique (Elvire Emanuelle) as she prepares for her very first match, and is the first feature film to spotlight the little known community of urban, coed high school wrestling.

Carly Stone makes her feature directing debut in what could be one of the buzziest films of the festival, if only because of its seemingly daring subject matter: it’s about sugar babies. Starring “The End of the F***ing World” breakout Jessica Barden, the film follows college student Blake who, understandably enough, is stymied by her future. Eager to get back into the good graces of her school newspaper and hoping to win a journalism prize, she plunges into the world of sex work. But what will Blake find as she goes deeper into her new endeavor? And, at some point, will this all stop being a “story” and become her actual life? And how will newbie Stone navigate that herself?

The appeal of “Paradox” is contained in the barest of facts: it’s a film written and directed by Daryl Hannah, starring Neil Young and Willie Nelson. What else do you need to know? (Maybe this: the SXSW website doesn’t even give a synopsis, just a note that it’s “a loud Poem. A whimsical western tale of music and love.”) It was recently picked up by Netflix.

“You Can Choose Your Family”

“Swiss Army Man” producer Miranda Bailey makes the jump to narrative directing with her feature-length debut, which sounds like the kind of black comedy that SXSW audiences are going to go positively nuts for (a guess we’re basing entirely on its unique plotline and a first look photo that amusingly hints at some major complications). Centered on shiftless 17-year-old Phillip, whose big dreams are hampered by his tough-talking dad (Jim Gaffigan). But this isn’t some run-of-the-mill coming-of-age angstfest, because while Phillip is struggling with his daddy issues, he discovers something entirely unexpected: his dad’s second family. Oopsie! Now who’s in charge? Filmmaker Suzi Yoonessi’s darling feature debut, “Dear Lemon Lima,” hit the festival circuit back in 2007 without much notice — a damn shame, considering how sweet her slice of Wes Anderson-ian coming-of-age comedy was. Still, she’s kept reasonably busy, including a long stint directing the TV series “Relationship Status,” but she’s back in the feature fold — aided by indie poster boy Mark Duplass — with a compelling new film set to bow at the fest. Scripted by Duplass, Sarah Adina Smith, and Charlene deGuzman (who also stars in the film), “Unlovable” will likely benefit from Yooneesi’s ability to take tough, female-centric stories and render them with honesty and grace. DeGuzman stars in the film as Joy, a young woman grappling with her sex and love addiction, who finds unlikely friendship with both Melissa Leo and John Hawkes via a 12-step program.

The latest from “Ai Weiwei: Never Sorry” director Alison Klayman, “Take Your Pills” offers the first feature-length analysis into the $13 billion industry of prescription stimulants like Adderall and Ritalin. Tracing the history of such drugs from their inception in the early 20th century to their current use by millions upon millions of kids and adults across the country (including kindergartners, Olympians, and presumably a good percentage of IndieWire readers), “Take Your Pills” promises to assess both the micro and macro effects of medicinal amphetamines. What do they do to our bodies when we use them, and what does it say about our culture so that so many people feel the need to abuse them? These are questions that we’re going to be grappling with for a long time, and questions that several generations of Americans have never been able to ask out loud. The film drops on Netflix just a week after its SXSW premiere. —David Ehrlich

Not much is known about Melanie Laurent’s latest directorial effort, but 2014’s “Breathe” proved the talented actress and singer to be just as brilliant behind the camera, and her involvement in another fraught thriller is more than enough to make it stand out from the rest of the SXSW lineup. Written by “True Detective” mastermind and Nic Pizzolatto (and based on his novel of the same name), “Galveston” stars Ben Foster as a hitman who’s on the run from his homicidal boss, and Elle Fanning as the young prostitute he takes with him to Texas. If nothing else, it sounds like a great double-bill with Lynne Ramsay’s “You Were Never Really Here” (or Terrence Malick’s “Badlands,” if you want to keep things in the spirit of this festival). But considering Laurent’s well-established talent for tension, and her eye for expressing character through landscape, we’re hoping that this story of two lost souls on the lam will be strong enough to stand on its own. —DE The reclusive poet Emily Dickinson is an unconventional choice for a comedy subject, but not a surprising one coming from wildly inventive director Madeleine Olnek. For her third feature, Olnek cast Molly Shannon as the eccentric poet, relegated by history to the status of reclusive wallflower and troubled spinster. “Wild Nights With Emily” uncovers Dickinson’s more vivacious side, including her lifelong romantic relationship with a woman (Susan Ziegler). The film also stars Amy Seimetz and Brett Gelman as rival publishers in Dickinson’s legacy. Olnek’s last film, “The Foxy Merkins,” was an outrageously zany buddy comedy about two lesbian hookers in an homage to hustler films. “Wild Nights With Emily” promises a lighthearted alternative to Terence Davies’ “A Quiet Passion,” complete with period visuals and an uninhibited Shannon in all of her oddball glory. —Jude Dry

While Netflix subscribers await this summer’s sixth season of “Orange Is The New Black,” Taylor Schilling next leads the directorial debut from former “Red Oaks” staff writer Laura Steinel. In the comedy, Schilling plays a corporate-minded, binge-eating 30-something whose innate self-centeredness is challenged with the arrival of a ward. But her pubescent, tomboy niece (Bryn Vale) has no interest in a babysitter — she’d rather escape suburbia than commit her life to juggalette revelry (also known as Insane Clown Posse superfandom). The narrative feature competition entry co-stars Kate McKinnon (“Saturday Night Live”), Bryan Tyree Henry (“Atlanta”), and Matt Walsh (“Veep”), and comes courtesy “30 Minutes or Less” and “The Break-Up” producers. —Jenna Marotta

A decade after collaborating on “The Business of Being Born,” documentarian Abby Epstein reteams with talk show host-turned-producer Ricki Lake. Their new effort – partly funded in with $114,000 in IndieGogo campaign donations — tells the stories of child patients whose symptoms have improved through herbal medicine that their parents illegally obtained. One of the film’s protagonists is Sophie Ryan, a now-four-year-old who was diagnosed with an inoperable brain tumor when she was seven months old. Sophie’s parents paired her chemotherapy treatments with doses of cannabis oil, and their daughter’s tumor dramatically shrank. “Weed the People” shares its title with a two-day festival that took place in Oregon when the state legalized recreational marijuana use in 2015. Epstein’s first documentary, 2003’s “Until the Violence Stops,” was a 2004 Primetime Emmy-winner that chronicled V-Day, the grassroots movements inspired by the literary legacy of her former boss, “The Vagina Monologues” scribe Eve Ensler. —JM

This Article is related to: Film and tagged Female Filmmakers, Girl Talk, SXSW