From returning Austin favorites to newbie talents to watch for, we've got 12 films you can't miss at this year's festival. 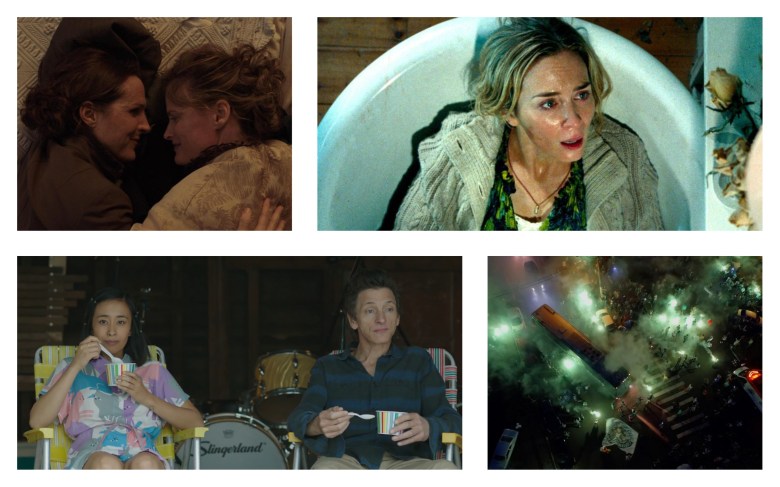 The annual multi-pronged South By Southwest Conferences and Festivals — SXSW, of course — is hitting Austin, Texas later this week for days and days of fresh film offerings (plus music, interactive, and a litany of exciting panels and conversations). With it comes the promise of a brand new festival-going season, along with a slew of films to get excited about finally checking out (and, because it’s Austin, lots of tasty barbecue).

From SXSW regulars like Mark Duplass and Joel Potrykus to rising stars like Carole Brandt and Suzi Yoonessi to marquee names like Wes Anderson and John Krasinski, this year’s SXSW Film Festival is offering up a robust new slate. We’ve picked out a dozen worthy new features to add to your SXSW schedule.

Check out 12 new films from this year’s SXSW that you’re going to want to see ASAP. The last thing anyone expected John Krasinski to make after his Sundance domestic drama “The Hollars” was a genre film about noise-seeking monsters that destroy the world and leave a single family struggling to survive. Come to think of it, maybe this is just another kind of domestic drama, albeit one that doesn’t require any sort of tearful hospital-set scenes (we think). In any case, “A Quiet Place” sounds like the kind of ambitious leap forward that Krasinski needs as a director, aided by Krasinski’s own performance alongside his real-life wife Emily Blunt, and “Wonderstruck” standout Millicent Simmonds. Set in a post-apocalyptic wilderness, the film follows a family that has carved out an existence in a world beholden to said noise-seeking monsters, but that’s an existence that simply can’t hold. So what happens next? —Kate Erbland

Michael Tully has built one of the more unusual filmographies over the past decade, veering from the druggy thriller “Cocaine Angel” to the documentary “Silver Jew,” the twisted family drama “Septien” and the coming-of-age comedy “Ping Pong Summer.” With “Don’t Leave Home,” he manages to fuse those many storytelling instincts into a fascinating whole, with a mysterious and beguiling slow-burn horror story set in the Irish countryside. The great Anna Margaret Hollyman stars as an artist whose small-scale replicas of real-life homes include one inspired by a rumored supernatural event where a young girl vanished — from a real-life and a painting, simultaneously — decades ago.

Her work lands her an invite to the actual home where the occurrence took place, and deeper into the nature of the circumstances than she could have imagined. Think “Get Out” for the Catholic set, or “Rosemary’s Baby” with the spookiness turned up to 11. Tully’s filmmaking path remains unpredictable, but “Don’t Leave Home” proves above all else that he gets better each time out. —EK

Joel Potrykus has been a fixture of SXSW ever since his twisted anti-capitalist comedy “Buzzard” premiered at the festival, and he followed that up with the equally beguiling “The Alchemist Cookbook.” The Michigan-based filmmaker combines an anarchic sensibility with astute social critique, and his latest wacky effort is no exception. Set on the brink of Y2K, the Oscilloscope-produced “Relaxer” stars Potrykus perennial Joshua Burge as a man tasked by his older brother to remain seated on a gnarly sofa until he attains an impossibly high score on “Pac Man.” So begins a bizarre allegorical romp that suggests the punk rock “Castaway,” as the increasingly disheveled gamer wastes his days away while enduring a series of surreal complications. Aided by a Neon Indian score, this funky statement on the end of the analog age is just the sort of gnarly provocation perfect for the Austin crowd. —EK Filmmaker Suzi Yoonessi’s darling feature debut, “Dear Lemon Lima,” hit the festival circuit back in 2007 without much notice — a damn shame, considering how sweet her slice of Wes Anderson-ian coming-of-age comedy was. Still, she’s kept reasonably busy, including a long stint directing the TV series “Relationship Status,” but she’s back in the feature fold — aided by indie poster boy Mark Duplass — with a compelling new film set to bow at the fest. Scripted by Duplass, Sarah Adina Smith, and Charlene deGuzman (who also stars in the film), “Unlovable” will likely benefit from Yooneesi’s ability to take tough, female-centric stories and render them with honesty and grace. DeGuzman stars in the film as Joy, a young woman grappling with her sex and love addiction, who finds unlikely friendship with both Melissa Leo and John Hawkes via a 12-step program. —KE

The latest from “Ai Weiwei: Never Sorry” director Alison Klayman, “Take Your Pills” offers the first feature-length analysis into the $13 billion industry of prescription stimulants like Adderall and Ritalin. Tracing the history of such drugs from their inception in the early 20th century to their current use by millions upon millions of kids and adults across the country (including kindergartners, Olympians, and presumably a good percentage of IndieWire readers), “Take Your Pills” promises to assess both the micro and macro effects of medicinal amphetamines. What do they do to our bodies when we use them, and what does it say about our culture so that so many people feel the need to abuse them? These are questions that we’re going to be grappling with for a long time, and questions that several generations of Americans have never been able to ask out loud. The film drops on Netflix just a week after its SXSW premiere. —David Ehrlich

Not much is known about Melanie Laurent’s latest directorial effort, but 2014’s “Breathe” proved the talented actress and singer to be just as brilliant behind the camera, and her involvement in another fraught thriller is more than enough to make it stand out from the rest of the SXSW lineup. Written by “True Detective” mastermind and Nic Pizzolatto (and based on his novel of the same name), “Galveston” stars Ben Foster as a hitman who’s on the run from his homicidal boss, and Elle Fanning as the young prostitute he takes with him to Texas. If nothing else, it sounds like a great double-bill with Lynne Ramsay’s “You Were Never Really Here” (or Terrence Malick’s “Badlands,” if you want to keep things in the spirit of this festival). But considering Laurent’s well-established talent for tension, and her eye for expressing character through landscape, we’re hoping that this story of two lost souls on the lam will be strong enough to stand on its own. -DE The reclusive poet Emily Dickinson is an unconventional choice for a comedy subject, but not a surprising one coming from wildly inventive director Madeleine Olnek. For her third feature, Olnek cast Molly Shannon as the eccentric poet, relegated by history to the status of reclusive wallflower and troubled spinster. “Wild Nights With Emily” uncovers Dickinson’s more vivacious side, including her lifelong romantic relationship with a woman (Susan Ziegler). The film also stars Amy Seimetz and Brett Gelman as rival publishers in Dickinson’s legacy. Olnek’s last film, “The Foxy Merkins,” was an outrageously zany buddy comedy about two lesbian hookers in an homage to hustler films. “Wild Nights With Emily” promises a lighthearted alternative to Terence Davies’ “A Quiet Passion,” complete with period visuals and an uninhibited Shannon in all of her oddball glory. —Jude Dry

Festival audiences may remember Austin-based filmmaker Yen Tan for his collaboration with David Lowery, “Pit Stop,” which premiered at Sundance in 2013 and was nominated for a John Cassavetes Award at Independent Spirit Awards in 2014. Shot entirely in black-and-white, “1985” is a quietly haunting elegy for a generation of gay men. Full of stillness and precision, “1985” stars “Gotham” actor Cory Michael Smith as a closeted man who returns to his Texas town for Christmas at the height of the AIDS crisis. Unable to share with his conservative family the tragedy he left at home, he struggles to connect with a younger brother he hasn’t seen in three years. In a gorgeously understated role, Virginia Madsen plays his mother, adding much to the film while doing very little. Subtle and gripping, Tan’s minimalist filmmaking style makes “1985” a uniquely engaging experience. —JD

While Netflix subscribers await this summer’s sixth season of “Orange Is The New Black,” Taylor Schilling next leads the directorial debut from former “Red Oaks” staff writer Laura Steinel. In the comedy, Schilling plays a corporate-minded, binge-eating 30-something whose innate self-centeredness is challenged with the arrival of a ward. But her pubescent, tomboy niece (Bryn Vale) has no interest in a babysitter — she’d rather escape suburbia than commit her life to juggalette revelry (also known as Insane Clown Posse superfandom). The narrative feature competition entry co-stars Kate McKinnon (“Saturday Night Live”), Bryan Tyree Henry (“Atlanta”), and Matt Walsh (“Veep”), and comes courtesy “30 Minutes or Less” and “The Break-Up” producers. —Jenna Marotta

A decade after collaborating on “The Business of Being Born,” documentarian Abby Epstein reteams with talk show host-turned-producer Ricki Lake. Their new effort – partly funded in with $114,000 in IndieGogo campaign donations – tells the stories of child patients whose symptoms have improved through herbal medicine that their parents illegally obtained. One of the film’s protagonists is Sophie Ryan, a now-four-year-old who was diagnosed with an inoperable brain tumor when she was seven months old. Sophie’s parents paired her chemotherapy treatments with doses of cannabis oil, and their daughter’s tumor dramatically shrank. “Weed the People” shares its title with a two-day festival that took place in Oregon when the state legalized recreational marijuana use in 2015. Epstein’s first documentary, 2003’s “Until the Violence Stops,” was a 2004 Primetime Emmy-winner that chronicled V-Day, the grassroots movements inspired by the literary legacy of her former boss, “The Vagina Monologues” scribe Eve Ensler. —JM Documentary filmmakers Jeff and Michael Zimbalist delivered one of the premier installments of the “30 for 30” franchise with 2010’s “The Two Escobars.” Returning to another story where soccer takes on a much greater meaning than the sport itself, the Zimbalists’ latest film looks at the aftermath of a tragic plane crash that took the life of nearly all the players on the Chapecoense Football Club. Following the surviving members, the families of the deceased, and the Brazilian fan community at large, the film investigates how they all choose to remember those lost and persevere in the face of a catastrophe. —Steve Greene

A.J. Edwards’ debut film “The Better Angels” was a calm, surprising portrait of the younger days of Abraham Lincoln. Edwards’ follow-up trades in the black-and-white palette for something with a little more color. Tye Sheridan stars as a teenager fresh out of foster care who becomes embroiled in a criminal investigation. Imogen Poots, Caleb Landry Jones, and Jeffrey Wright make up the rest of the ensemble in a film that trades early 19th century Indiana for a more modern, immediate story. We’ll see if Edwards’ writer/director sensibilities survive the jump. —SG