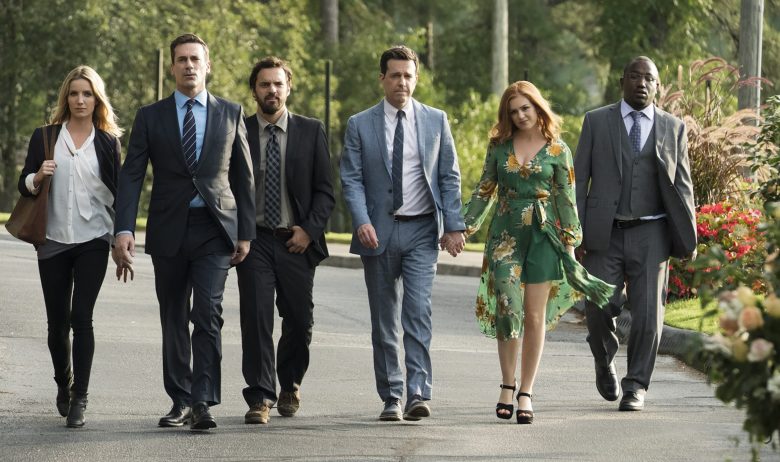 No, no, really, this latest star-studded comedy about a group of friends locked in a decades-long game of tag is based on a true story. One that was even featured in the Wall Street Journal, for crying out loud! (Seriously, you can read Russell Adams’ feature, “It Takes Planning, Caution to Avoid Being It,” right here to get a sense of just what the heck is happening in Jeff Tomsic’s upcoming feature, “Tag.”) It’s nuts.

The film stars Ed Helms, Jake Johnson, Isla Fisher, Hannibal Buress, Jon Hamm, and Jeremy Renner as a group of long-time friends who have been playing the same game of tag since first grade, an all-out war of “you’re It!” that takes place every May, and increasingly requires some big asks from its players — traveling around the country, risking jobs and relationships, and (quite frankly) picking some pretty inappropriate settings to slap someone into the game. The film’s first trailer lays out a slew of just such situations, with players tagging pals in during funerals, births, and everything in between. Renner, Hamm, and Helms even appear out of character and yet are somehow still playing tag.

“Tag” picks up before the wedding of the group’s sole undefeated character — played by Renner — as he prepares for what looks like an especially ill-timed wedding (April was too early, June was too late, and thus: a Tag-adjacent wedding date). While he’s eager to put the whole thing to rest, the group won’t let it go. Presumably, this will all get to be very, very wacky indeed, though the film’s first trailer does make a strong play for some gushy emotions. The game is what binds them together, you see.

Annabelle Wallis, Rashida Jones, and Leslie Bibb round out the cast of “Tag.” The film opens on June 15, but you can check out the film’s first trailer below right now.