Alison Klayman's documentary approaches the spread of prescription amphetamines with the reactionary zeal of a local TV news segment. 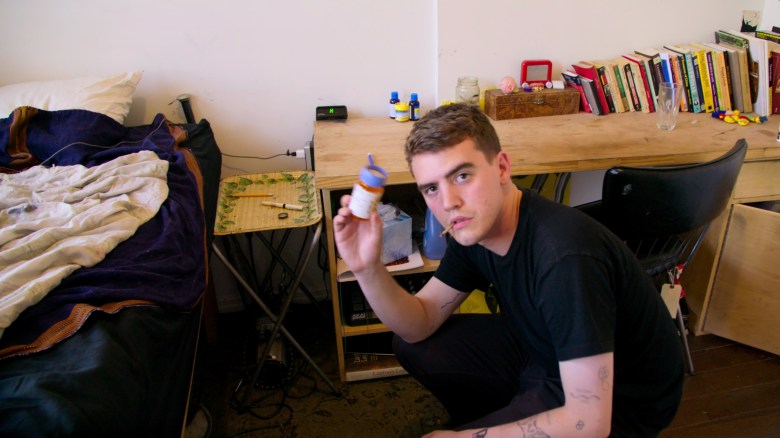 A comprehensive but aggravatingly myopic look at the recent proliferation of prescription amphetamines like Adderall and Ritalin, Alison Klayman’s “Take Your Pills” is much less interested in the drugs themselves than it is in this country’s unique appetite for them. Nevertheless, Klayman’s conclusions on both subjects — and the scare-mongering tactics she uses to shine light on how they intertwine — result in a reductive documentary that’s far too focused on the big picture to really unpack the human element.

“Take Your Pills” might be the first documentary feature to broach this particular subject, but it’s clear from the start that Klayman is gripped with the reactionary zeal of a local TV news segment. The opening credits set the stage for a film so hopped up on graphics that it should come with its own supply of Focalin: 8-bit graphics and glitchy music used in a tired attempt to conflate ADHD with a video game aesthetic and a pixelated cartoon of a skeleton drowning in little blue pills. It might not be the best way to introduce a supposedly sober look at our sped-up culture.

Fortunately, Klayman doesn’t always look through that lens, providing the context she needs to convince us why this film might be necessary. She cuts to the heart of the matter, demonstrating the clarity (if not the nuance) that she brought to her previous doc, 2012’s “Ai Weiwei: Never Sorry.” Talking heads set the terms, a gaggle of academics and scientists running us through a cogent history of amphetamines. From the invention of speed, to the public introduction of Benzedrine, to the overproduction of uppers in the 1960s and the Controlled Substances Act that reclassified them as prescription drugs, it’s fascinating stuff with a richer backstory than you might suspect. One standout detail: The first article about college students using amphetamines on campus was published in 1937.

So if these drugs have played a role in our culture for the better part of a century, why was it only recently that they exploded into a $13 billion-per-year business? Where many point toward Big Pharma, “Take Your Pills” encourages us to think even bigger. Light on the specifics, Klayman essentially argues that — at some indeterminate point around the tail end of the 20th century — America resigned to its competitive drive, and all of its citizens became conditioned to think of themselves as little pieces of human capital.

Without explicitly connecting this phenomenon to the emergence of the internet, Klayman’s case is our country has become such a hyper-competitive arms race that people will do anything to get ahead (she somehow resists the temptation to illustrate the point with a clip of Jessie Spano’s “I’m so excited, I’m so… so… scared!” freakout). One subject declares that “People used to use drugs to check out, but now they use drugs to check in,” and you can hear Klayman say, “That makes me sad” off camera. From there, “Take Your Pills” introduces us to a small handful of people who are (or have been) on these drugs at some point, duly noting the diversity of their experiences. There’s a tech bro who struggles to focus on his code, a music executive who needs to keep his thoughts straight, a young artist who’s been on the stuff since he was three years old, and the inevitable smattering of college students who talk about amphetamines as “study drugs.” We even meet ex-NFL player Eben Britton who used to take Adderall before games thanks to his medical exemption.

The range of subjects does a fine job of balancing the focus of media coverage (kids) with the actual future of the business (adults). A clip from “The Bling Ring” cements the vague impression that class is a factor; when health insurance affords people access to “safe” drugs, it can disincentive them away from the unsafe ones. All the same, health isn’t really much of a factor here, in either a positive or a negative way (there’s one passing and inconclusive mention re: the long-term effects of these drugs).

For Klayman, ADHD medication is just another facet of the same conversation that crops up around anti-depressants — it’s the latest sign that American society is medicalizing life itself. After all, more than 90 percent of the prescriptions for these medications are written in the United States. And yet, conflating the prevalence of a drug with its potential is just as dangerous as ignoring it. The same way that the (far more worrisome) opioid epidemic can’t negate the intended benefits of painkillers, the abuse of amphetamines can’t negate the value they offer to others. Maybe, as one scientist opines towards the end of the film, the only provable effect of these drugs is that they increase a patient’s feelings of accomplishment and self-worth, but that only makes these pills sound more necessary.

Klayman has a clear interest in the hyper-competitive nature of late capitalism, and it’s entirely understandable how she could make the connection between the drive for perfection and “performance-enhancing” drugs. Even so, “Take Your Pills” is too recklessly bound to that thesis, which puts the cart way before the horse and leaves the movie with nowhere to go once we recognize the finite limitations of its terms. While Klayman’s approach emphasizes the fact that everyone has their own relationship to substances (illicit or otherwise), her movie is so preoccupied with the idea of competitive advantages that its “Harrison Bergeron” analysis spares little thought for the people who just need some help to be themselves.

“Take Your Pills” premiered at SXSW 2018. It will be available to stream on Netflix beginning on March 16th.

This Article is related to: Film and tagged adderall, Netflix, Reviews, SXSW