Jim Cummings' uneasy story of a police officer whose life is falling apart is a compelling blend of comedy and tragedy. 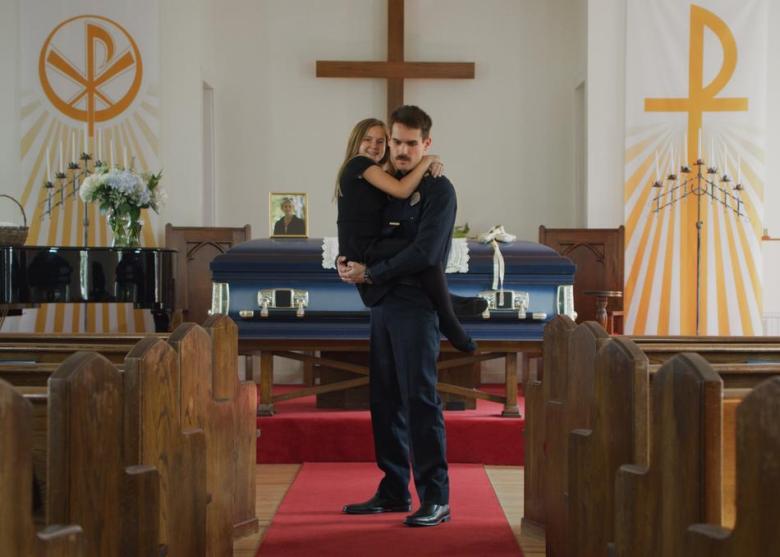 “Thunder Road” tests the limits of how long one can sit with the unflinching portrait of an angry, broken man whose life is falling apart in every direction, and it turns out it’s about 91 minutes. Writer-director-star Jim Cummings’ adaptation of his acclaimed 2016 short focuses on a wayward police officer who can’t manage to put his life together, largely due to his own simmering rage and sloppy mistakes. Cummings’ unruly performance as the mustachioed anti-hero engenders a paradoxical character study, in which the filmmaker takes to both sides of the camera to beg the audience for empathy, but doesn’t make it easy.

The Grand Jury prize winner at the 2018 SXSW Film Festival is most impressive for its uncompromising magnification of despair, with Cummings as a man who can’t stop traipsing through a trail of banana peels, and while that approach can grow weary it’s also an impressive gamble maintained through the sheer convictions Cummings brings to the material.

“Thunder Road” opens with the same stunt as its short, which is a striking gamble given the original material’s limitations. Officer Arnaud — aka Jim — eulogizes his mother in a teary, awkward speech that keeps getting messier over the course of a 10-minute take. His attempt to say something meaningful leads him down a series of bizarre pathways as his composure keeps slipping, his friends and colleagues in the room watch transfixed, and even his attempt to elevate the proceedings with the titular Bruce Springsteen song doesn’t pan out when the boom box goes bust. It’s hard to imagine a low budget feature of this scale being able to afford even a snippet of the Springsteen song, but the equipment malfunction is a great example of turning budgetary limitations into an advantage — it’s a terrific punchline in the midst of Jim’s meltdown, and sets the stage for the movie’s uneasy blend of humor and melancholy to come.

However, the “Thunder Road” short was perfectly conceived for a concise story, capturing the full scope of Jim’s persona in its roving long take. In the feature, the title card comes up as the funeral ends, and the rest of the movie struggles to build on the original concept. While it remains a fascinating character study driven by Cummings’ striking delivery, it also falls back on conventional twists. The resulting drama showcases a remarkably strong vision in the confines of more familiar story beats, but it’s a testament to Cummings’ maniacal performance that he manages to keep us engaged. It’s a close cousin of the discomfiting explorations of white male despair in Rick Alverson’s “The Comedy” and “Entertainment,” but where those movies linger in the solipsism of deeply unlikable men, Jim at least tries to do better.

He’s just really, really bad at it. Not long after the funeral, he loses his temper on a deranged homeless man, and the ensuing scuffle requires more than few officers to calm him down; dash cams capture the whole ordeal, setting the stage for developments later on. Things never, ever get better for Jim, and even the brotherhood of the police force offers little solace. (His partner, played by Nican Robinson, gives it a shot with sporadic results.) At a time when the very concept of the police carries a discomfiting charge in American culture, Cummings’ clumsy meltdowns epitomize the disconnect. The badge may carry a sense of duty, but it’s impossible to reconcile that unassailable, patriotic notion with its attachment to a flawed human being.

The sole bright spot in Jim’s life stems from his young daughter (Kendall Farr), but he’s barely present in her life and struggling to reconnect with his estranged wife (Jocelyn DeBoer) even as she’s in the process of divorcing him and claiming custody of the girl. The situation deepens and grows worse, but that’s pretty much the full extent of the movie’s arc.

But Cummings has some compelling ways. As Jim bops around from work and home, reeling from his mother’s death and eager to rejuvenate his role as a father, “Thunder Road” maintains the uneasy formalism of its opening: Cummings shifts between lengthy wide shots and uneasy closeups of Jim’s face, which simmers with rage even as his trim mustache suggests an attempt to maintain composure. At a moment when the travails of the disenfranchised white male are at once at the center of a national conversation and considered antiquated in the progressive echelons of popular culture, Jim is a potent symbol of privilege slamming headfirst into alienation.

The movie never quite abandons its roots, with the succession of moments from Jim’s life unfolding more like a series of vignettes that only occasionally have cumulative effect. Many of Jim’s meltdowns feel interchangeable, although Cummings injects many of these scenes with a striking blend of comedy and tragedy. In one scene, he visits with his daughter’s levelheaded school teacher, loses patience when he’s told about the girl’s misbehavior and picks a desk up over his head in a fit of rage; then he learns that he’s holding her seat. For a moment, as the heavy object hovers over his head, “Thunder Road” settles into a shocking fusion of slapstick and discomfort that elucidates the movie’s themes.

It’s easy to imagine a variation on “Thunder Road” with Danny McBride as its lead, with the character’s chaotic life providing the vessel for a jarring black comedy. But Cummings has a different kind of sensibility: He strips out punchlines where they seem inevitable or upends them with grim developments that no humor can sugarcoat. Jim’s hubris can’t save him. “Thunder Road” lands on a tragic development, but upends it with a single teary-eyed moment that hints — with no real evidence — that better things may be around the corner. The movie suggests that while comfort comes in small doses, redemption stories are bullshit.

“Thunder Road” premiered in the Narrative Competition section at the 2018 SXSW Film Festival. It is currently seeking distribution.