Season 11, Episode 10, wraps up a lot of story and doesn't leave us furious at Chris Carter — which is, honestly, the best case scenario. 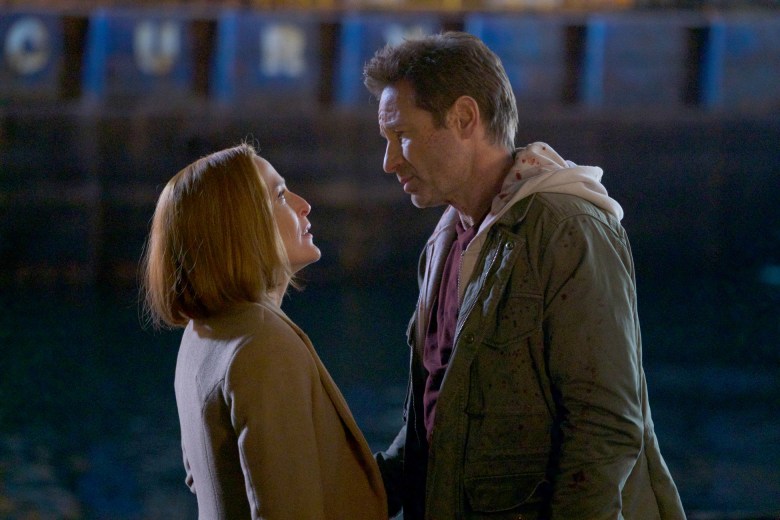 FBI agents Mulder and Scully, once upon a time, had sex. Scully also had in vitro fertilization with Mulder’s sperm, and also was unconscious with the Cigarette-Smoking Man at one point, which he used as an opportunity to experiment on her. Point is, 17 years ago Scully got pregnant, had a baby she named William, and gave him up for adoption because she wanted to keep him safe. And then that baby grew up, and…

Every episode entitled “My Struggle” is theoretically about someone’s personal struggle — and this time, it’s William’s. So we start with a montage about William’s early years, which featured him discovering that he had special powers, followed by a narrative jumbled up by time jumps (but not in an unpleasant way).

Basically, William (who’s got crazy superpowers) is continuing to run from the government agents who want him, as well as the other nebulous groups who believe he contains the solution to saving us all. Mulder and Scully have been hoping to find William for some time (following his escape from authorities in the episode “Ghouli”) so this is big.

But don’t worry about William, as he has the ability to literally explode people with his mind, as Barbara Hershey and her goons discover in their last moments on Earth. Oh, and Skinner got run over by former FBI Agent Reyes and Cigarette-Smoking Man? Poor Skinner.

Another power of William’s is the ability to impersonate others, which means that he’s able to fake out Cigarette-Smoking Man as Mulder, get shot, and escape into the harbor. (He does manage to dodge a headshot, which is impressive.) Afterwards, the real Mulder puts a lot of bullets into Cigarette-Smoking Man, and Scully tells him that while William was never really their son, she’s effing pregnant with his child.

All that, plus Director Kersh says that he’s closing down the X-Files. (It’s a statement that’s been made before, but the only authority we trust on this subject is Gillian Anderson).

The apocalypse didn’t happen. William got shot, but he’s still alive, and Scully has let him go because he’s a superfreak. And she’s pregnant again with a child who’s definitely Mulder’s. Annnnnnnnnd that’s how things end for Scully, as far as we know. So Scully and Mulder only refer to their son as William — despite the fact that his adoptive parents named him Jackson – and it honestly is an element that feels off-putting given that children of adoption suffer from their complicated parentage. Guys, his name is Jackson Vandecamp, stop shouting “William!” like he’s gonna answer!

Also, it’s basically confirmed that Mulder was never William’s biological father, and that Scully’s pregnancy was a medical violation. Does Scully get even more than a moment to cope with this revelation? NOPE. Welcome to “The X-Files”!

Well, at least we confirmed that Mulder and Scully aren’t just a couple — they’re a couple who will soon be welcoming a child into the world! Mazel tov!

That’s all we got here, to be honest. The fact that Season 11 acknowledged sexual activity between Mulder and Scully, though? This is the very definition of “we’ll take what we can get.”

Somehow, this week the wig was a bit of a disappointment, but we’re not going to get hung up on it.

During the classic years of the show, more than once Mulder and Scully were thrust into situations where they were being impersonated by someone, to the point where any rational human being would have said to their partner, “Hey, let’s come up with a code word in case we are subject to psychic manipulation or body-swapping.” Sadly, we learn this week that after decades together, Mulder and Scully have still not done this. But we still enjoy the memories of those previous episodes! (Largely because of those moments.)

As this episode was written by Chris Carter, there were no shortage of options here, but it could have been a lot worse. Meanwhile, this prelude to Mulder finally getting to talk to his son (biological or otherwise), face-to-face, was just the tip of an iceberg of awkwardness. It did lead to a well-executed sequence where William/Jackson flat-out exploded his nemeses, which was pretty fun to watch, but this scene featured a lot of talking around issues, as opposed to acknowledging them. “I had some payback to… pay back.”
—Mulder

This was a line where on the page, it was probably pretty awkward, but somehow David Duchovny sold it, and god bless him for it.

For a while now, perhaps decades, we’ve come to accept that “The X-Files” exists in an alternate universe from ours — one where, sure, go ahead and kill six men for no actionable reason, you can still be an FBI agent. Honestly, much of the season has avoided this trap and demanded that Mulder and Scully operate under rules pertaining to our actual universe.

“My Struggle IV” is hard to approach as a season finale, given our awareness that it might be a series finale (or at least the last episode featuring Gillian Anderson as Agent Scully). We’ll have further thoughts on this episode as a potential series finale soon. But while “My Struggle IV” wasn’t a high point for the series, and featured bad creative decisions and awkward dialogue, it could have been a lot worse. (We know this for a fact, after seeing “My Struggle II.”)

Show creator Chris Carter wrote and directed this installment, and he deserves credit for playing with timelines in an innovative way — his choices when it came to how to overlap scenes worked pretty well, for the most part. But we’re definitely grading on a curve here.

After 25 years, 11 seasons, two movies, and so much drama, it feels impossible to ever say goodbye to “The X-Files.” But if this is the final send-off, it’s one we can accept.