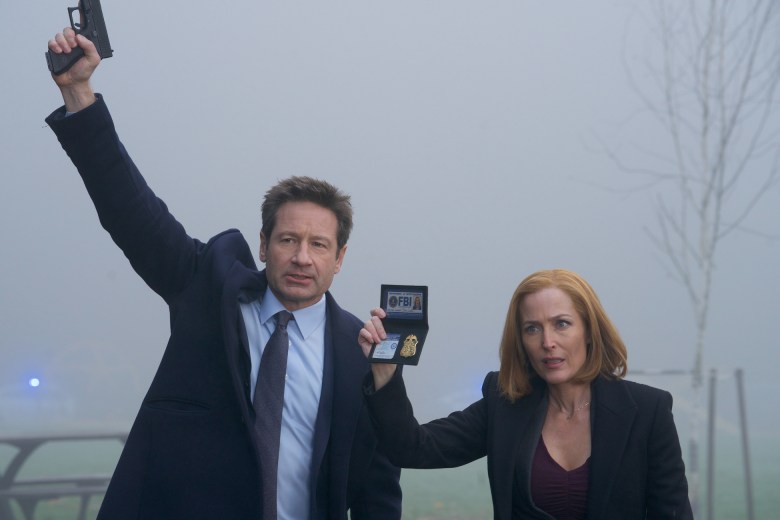 Mulder and Scully investigate weird crimes for the FBI. Sometimes, those crimes don’t have anything to do with government conspiracies — sometimes, they feature evils both supernatural and all-too-human.

Mulder and Scully arrive in a small Connecticut town to investigate the strange and violent death of a police officer’s son, who was found mutilated in the woods. But Scully suspects that what might seem like an animal attack could actually be the work of an adult in the community, while Mulder’s got his theories about hybrid wolves and, eventually, witchcraft.

Unfortunately, while they investigate, the police chief’s daughter is also killed in a similar fashion — supporting Mulder’s theory that a witch’s “familiar” is luring those children into the woods using their favorite TV show characters. However, the grieving father of the first victim, Officer Eggers, takes matters into his own hands and tracks down Melvin Peters, an unregistered sex offender in town with creepy clown suits and a monkey in his closet. During the mob scene that results, Eggers —blaming Melvin for his son’s death — shoots the man in the head.

A sympathetic judge doesn’t charge Eggers for the crime (despite another officer coming forward with evidence proving there was no way Melvin could have hurt the boy) but that doesn’t stop the real story from emerging: Chief Strong was cheating on his wife with Eggers’ wife Diana, and it was Strong’s wife Anna who had used an old spellbook to try to punish her husband as well as Diana. Unfortunately, the spell has gotten out of control, and right after the creepy Mr. Chuckleteeth leads to Eggers’ death, a wolf familiar kills the Chief and Diana, and Anna ends up bursting into flame as she tries to get the spell under control. Mulder and Scully leave town hoping that things are over, at least for now. A lot of people died, including two children, because a woman tried to get revenge on her cheating husband by using an ancient book of magic to curse him and his lover and didn’t know what she was doing. In case you needed a reminder of this important life advice: As Giles once reminded Xander on “Buffy the Vampire Slayer,” “don’t speak Latin in front of the books.”

It’s genuinely impressive how much “Familiar” felt like a vintage “X-Files” episode, given that both its writer (newcomer Benjamin Van Allen) and director (veteran Canadian Holly Dale, the second woman hired to direct this season and fourth total across the show’s 218 episodes) have never worked on the show before now. Clean and direct in its standalone approach, it wasn’t the most twisty of mysteries, but did deliver the sort of supernatural weirdness we remember fondly from the show’s earliest years.

What kind of creepy-ass children’s programming are they watching in Connecticut? Jeez, the knock-off Teletubbies were bad enough, but Mr. Chuckleteeth (pictured below) was unpleasant — even before children started to sing about how “if you try to run and hide, we’ll send you straight to hell.”

Also, no way would “The X-Files” have been able to get away with the episode’s most shocking moment during its original run in the 1990s. Fox broadcast standards might not have been super-strict back then, but showing a man get shot point-blank in the head was still beyond the pale. The blunt execution of that sequence was honestly far more horrifying than creepy Mr. Chuckleteeth — because it was so very human. So Season 11 continues its off-and-on relationship with acknowledging the ghosts of episodes past in a very “off” direction. There is a moment when Mulder makes mention of William (his son William, that is, not be confused with his father William, or Scully’s father William, or Scully’s brother William Jr.). But there is absolutely no acknowledgment of the fact that in Season 5, Scully met a little girl named Emily who she discovered was actually her genetic daughter, created with ova harvested during her abduction, and that little girl died, and it was very, very sad.

As we just made clear a moment ago, sometimes “The X-Files” has a tendency to recycle names, and we’d already gotten a big hit of sadness over the death of a child as Mulder and Scully examined the first boy’s body — playing into the Emily thing might have been overkill. But you know what would be an easy solution to that issue? Not using the name Emily.

Also, if we’re going to get nitpicky, Scully seemed to not be fully versed in the basic tenants of witchcraft, which, thanks to Season 5’s “Chinga,” we know is not the case.

Mulder and Scully were all business in this episode — we literally never saw them outside the context of the case — but the way Gillian Anderson played Scully’s reactions to yet another crazy Mulder theory did still bring out the 20-plus years of affection these characters have for each other. Her playful “Mmmhmmm” at his insistence that he’d seen a wolf-shaped familiar was their relationship in a nutshell.

We have yet to get an in-show reason for Scully’s new wig haircut, but a confession: while we were vaguely dreading this new look after seeing a few early publicity photos, it’s grown on us. (According to Anderson on Twitter, the new wig’s name is Kitty.)

“I have let the devil into my soul and I have sinned against God, broken a sacred commandment. But I didn’t kill anybody, especially not Emily.”
— Chief Strong

Between the awkward, overly formal phrasing and the way guest star Alex Carter delivered this line like a born-again Baptist preacher, this reveal, simply put, played pretty weird. But honestly, the main reason it stuck out is that the rest of the episode, by and large, featured dialogue that actually sounds like the way people talk, which was quite pleasant. Sometimes “X-Files” writers have a tendency to lean towards the verbose, and it never feels all that authentic.

Look, there are only two episodes left this season (potentially ever). We’re going to cherish every single moment of cuteness we can. Though Scully and Mulder’s final lines were also interesting, in that they did do a nice job of buttoning the episode’s themes without overplaying the moment:

If we were to get nitpicky, we’d note that it’d have been nice to have more of a sense of the timeline here — things seemed to move unnaturally fast on a plot level, despite the fact that it didn’t feel like more than two days had passed. And the ending, while tragic, was almost a little too pat, and reflected just how little Mulder and Scully actually contributed to the narrative. If they hadn’t ever come to town, the only major change might have been that Officer Eggers would never have gone looking for sex offenders in the area (since it was Scully who raised the issue) and Melvin Peters would still be alive as a result.

That said, that sort of thing definitely happened more than once during the show’s original run. And  perhaps due to the triggering of that pesky thing we call nostalgia, it’s hard to get too mad at “Familiar.” Sure, it’s perhaps not a good sign that the first episode of Season 11 to really feel like a true classic “X-Files” episode is Episode 8 of 10 — not that we’re complaining about enjoyable narrative experiments like “The Lost Art of Forehead Sweat” and “Rm9sbG93ZXJz,” but in a perfect world there might be at least one or two more episodes like “Familiar” in the mix. But as always with “The X-Files,” we take what we get, and are more often than not grateful we’re getting it at all.