The penultimate installment of what could be the last season of "The X-Files" ever does manage to make some time for Mulder and Scully. 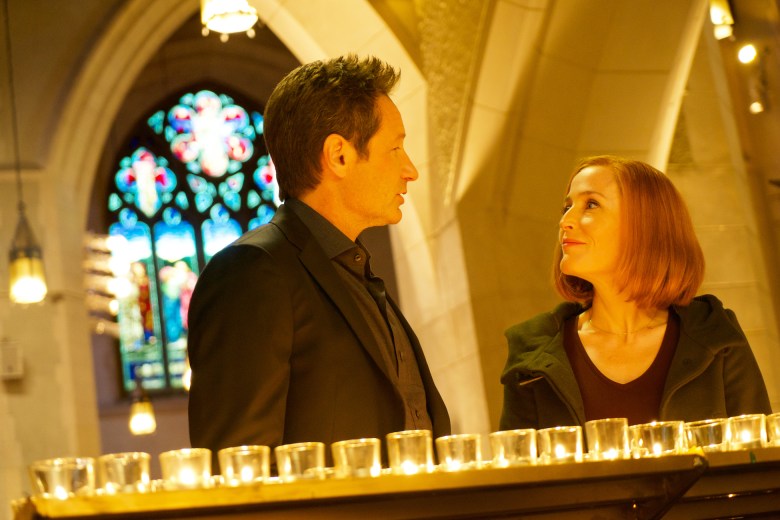 Agents Mulder (David Duchovny) and Scully (Gillian Anderson) solve weird crimes for the FBI, and a big part of their partnership is that Scully believes in God (and is a practicing Catholic). Meanwhile, Mulder believes in aliens, Scully, and not much else.

Somebody’s harvesting organs for non-organ-donation purposes, and Mulder and Scully are on the case to figure out why — but there’s really not much mystery to it after we get introduced to the wacky cult created by former film and TV star Barbara Beaumont (Fiona Vroom, whose goofy performance is one of the episode’s biggest positives), who is working with Dr. Luvenis (Jere Burns) to use the organs of their cult underlings to give themselves eternal beauty and life. (And hey, it seems to be working, given that Barbara’s in her 70s and Dr. Luvenis is 85.)

Mulder and Scully aren’t the only ones trying to track down this cult, though — there’s also Juliet (Carlena Britch), whose sister joined the cult, and whom Juliet is determined to rescue (while also jabbing stakes cut from the fence of her local church through the bodies of those working to harvest the organs). The final bloody confrontation results in both Barbara and Dr. Luvenis dead, and Juliet reunited with her sister and totally okay with how she’s probably going to jail for murder, because she feels like she did the right thing in God’s eyes.

The episode ends with Mulder and Scully lighting candles in church, Scully whispering something inaudible in Mulder’s ear, followed by “that’s my leap of faith forward, and I’d like to do it together.”

“I always wondered how this was going to end,” he says in reply and lights another candle. Ewwwwwwww. Also, Mulder and Scully have a conversation about faith and their relationship…we think?

There are two types of “X-Files” fans: the ones who don’t ever want to see Mulder and Scully together as a couple and the ones who spent the last scene of the episode screaming “JUST KISS ALREADY!” at their screens.

Either way you go, this sort of vague conversation is all too familiar to longtime viewers, though a little less tolerable this time because next week is the season finale, which promises to be pretty chaotic. If this was Mulder and Scully’s last chance to have a real one-on-one conversation about their lives and what they mean to each other, we would have appreciated a little more specificity.

Still, we choose to read those final moments as relatively optimistic for them and for the future.

“Did you get a haircut?” It took Mulder getting new glasses to notice something that’s been blindingly obvious to all of us for the last three episodes. Per the production numbers, “Nothing Lasts Forever” was originally supposed to be the eighth episode of the season, not the ninth, so it’d really only have been two weeks of him not noticing, not three. But while it’s such a believably male moment for him not to have noticed, it was also a little silly. Scully’s reaction in this instance was, in fact, perfect: “Are you kidding me?”

Speaking of Mulder’s glasses — look, back in the 1990s, there used to be entire WEBSITES devoted to David Duchovny wearing glasses (Exhibit A). They are no longer operational (rest in peace, Geocities) but making a big deal about Mulder’s new frames sure did tickle those old memories.

That said… sometimes we get overly nitpicky with these reviews, but this honestly feels like something we can’t overlook. “You can’t know how many times I imagined a scenario where you left that basement office before I ever needed glasses?” Mulder, for God’s sake, you were wearing glasses the very first time you met! Seriously, let’s go to the tape:

We get it, the glasses in “Nothing Lasts Forever” represent the fact that Mulder is aging, the point of the line really has nothing to do with that. But it’d still be nice if the show’s relationship with continuity was slightly more consistent.

Last week, we observed that there’s no way “The X-Files” would have gotten away with shooting a man point-blank in the head during its original run. This week stands out in a similar regard, as the blenders full of human organs and general revelry in viscera is a reminder that thanks to 1990s-era Standards and Practices, “The X-Files” had to be a lot more circumspect with how it handled guts and gore.

Of course, there was no shortage of gross-out moments during the original seasons, but there was a little more restraint back then, and given how many times “Nothing Lasts Forever” nearly made us gag, we honestly miss it a little bit. Cults have always been a reliable well for storytelling on this show — easily half a dozen episodes from the original seasons focused around some creepy group worshipping something arcane — and the concept of aging, or avoidance thereof, is also a theme that’s been explored frequently.

Also, this isn’t the first time Mulder’s told Scully that she smells bad. He really knows how to woo the ladies.

“I remember Dylan. He wouldn’t shut up. I’m glad we ate him.”
— Barbara

Much of the dialogue in this episode was really solid, and Barbara was especially fun at certain points, whether it was singing “There’s Got To Be a Morning After” as the soundtrack for a disemboweling or asking Scully if a missing girl was a Netflix executive. But look, we get it you guys are cannibals and super-gross about eating organs and whatnot. Would a euphemism or two kill you? When you have us craving the subtlety of “Santa Clarita Diet,” that is a bad thing. “I finally know why I’m not a Christian, Scully. My parents never got me a puppy.”
— Mulder

Many of Mulder and Scully’s breakout scenes were solid thanks to Anderson and Duchovny’s enduring chemistry, but this particular line in that particular conversation about faith was a charming and light moment for both characters.

While incredibly gross, the early scenes of this episode were really well-directed by James Wong, including some strong visual transitions that had us taking notice. Unfortunately, on a story level “Nothing Lasts Forever” came together only via some pretty clumsy moves. As just one example, the entire plotline about Dr. Luvenis stealing a heart that Mulder and Scully had planted a tracker on was brushed over with a few lines of dialogue and felt like a pretty desperate last-second rewrite to smooth other some production issue.

That said, if choices like that were made so that we could have more screen time devoted to character-focused scenes (featuring both the good guys and the bad), it’s a sacrifice we can learn to live with. “Nothing Lasts Forever” was a pretty on-the-nose title, but one worth letting rattle around in our brains this week, as we prepare for the season finale, and whatever might come then.