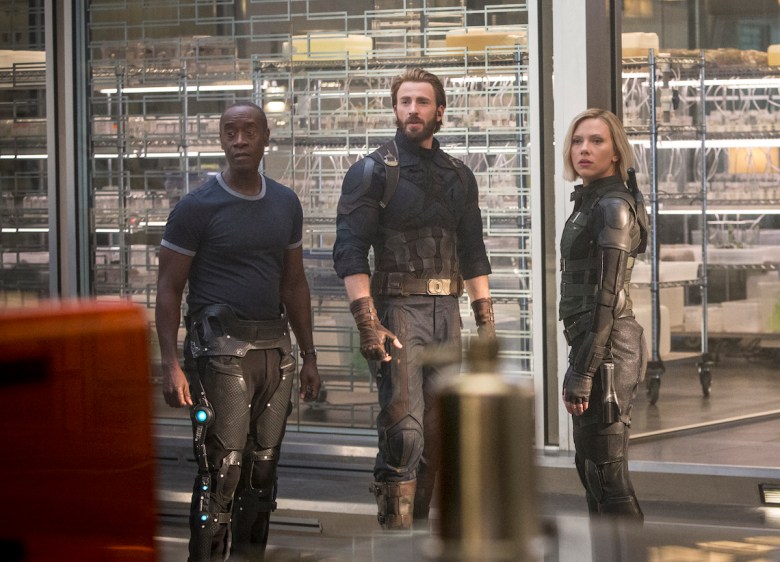 (Spoilers ahead for both “Avengers: Infinity War” and its post-credits scenes.)

Audiences are going to have to sit tight after the conclusion of Joe and Anthony Russo’s sprawling, ambitious “Avengers: Infinity War” (total running time: 149 minutes) to see the film’s last scene, which plays out at the end of some very long credits (it takes a lot of people to make a multi-million dollar film, after all). This recurring feature is different from other recent Marvel movies because it’s the only one. While there’s never been much rhyme or reason to how many post-credits scenes a Marvel Cinematic Universe can pack in (after “Guardians of the Galaxy, Vol. 2” director James Gunn unspooled not just one, not two, but a full five post-credits scenes), recent films have stuck to two.

The Russos only have one, but it’s unmissable.

It’s also a scene that ties directly into two upcoming Marvel films, and opens up the history of a beloved superhero characters that Marvel fans are finally set to meet on the big screen next year. And, as is not always the case with post-credits scenes that can feel a touch disconnected from the feature that played before them, it hammers home the same emotional beats that “Infinity War” ends on. In short, it’s kind of great.

Here’s what it is and how it ties back in the rest of the MCU.

(Spoilers ahead for both “Avengers: Infinity War” and its post-credits scene.)

1. Checking In With Fury and Hill

In the shortest terms: at the end of “Infinity War,” the grand plan by Thanos (Josh Brolin) to wipe out half of the galaxy’s humanoid creatures (dogs, cats, space hogs, and related animals are totally fine; anyone who even faintly resembles a human is a target) comes to fruition. (It’s part of his master plan to bring balance back to an overloaded existence.) After gathering his precious Infinity Stones and heading to Earth to battle the planet’s mightiest heroes (yes, this is a very truncated version of everything that happens in the film), Thanos does what he has long promised, snapping the hand that wears the Infinity Gauntlet, and doing away with half of humanity in the process.

So, yes, the fear that “Infinity War” would kill off a lot of beloved characters proves out, and in big way. Thanos’ victims don’t drop dead; instead, they just start feeling weird and slowly crumble, evaporating into fragments that float away with the breeze. They’re just gone. It’s heartbreaking. That’s the state of things when the film finally winds down to its single post-credits scene, which finds Nick Fury (Samuel L. Jackson) and Maria Hill (Cobie Smulders) popping up for their only “Infinity War” appearance. The pair are driving in a city when they’re alerted to the battle with Thanos, currently raging in Wakanda, and as they start reacting to the news, an SUV swerves in front of them, crashing into a light pole. The pair jump out to assist, only to find that there’s no driver in the front seat (presumably, they were vaporized, thanks to Thanos).

It’s disorienting enough, but then everyone starts screaming and a helicopter crashes into a high-rise behind them. Thanos’ wicked deed has spread, and the world will never be the same.

And neither will Fury and Hill. Smulders’ character disappears first, and just as Fury starts to fade away, Jackson lets out a truncated “motherf—” (for the uninitiated, this is one of the great cinematic tropes of our time).

While Fury is gone before he can even finish his expletive, he’s at least had the foresight to use a flashy communication device, styled to look like some kind of gnarly S.H.I.E.L.D. issued beeper, to reach out to someone. With Fury gone, the camera pans to the fallen device and its screen, which shows a message being sent…and then received, apparently by Captain Marvel, whose star-shaped logo pops up. At last, someone to save the day!

Fans of the franchise have long known that Captain Marvel, aka Carol Danvers (Brie Larson) is set to appear in the upcoming (and still untitled) fourth Avengers film, but in just one shot, the post-credits scene lets on that she will play a major role in the sequel and that she’s already a known confidante to Fury. Before that film, however, Captain Marvel will get her very own solo feature, a ’90s-set origin story appropriately titled simply “Captain Marvel.” Directed by Anne Boden and Ryan Fleck, that film will hit theaters on March 8, 2019, two months before the fourth Avengers film arrives in May.

1a. A Final Promise

It may not be a full scene, but it’s an added piece of flash that hints at more mayhem to come, in the minimum of time. It all ends with one serious stinger, a single line of text that plays off a Marvel tradition of promising that its mightiest heroes will return for another battle in a new film, white words against a sea of black: “Thanos will return.”

This Article is related to: Film and tagged Avengers: Infinity War, Marvel