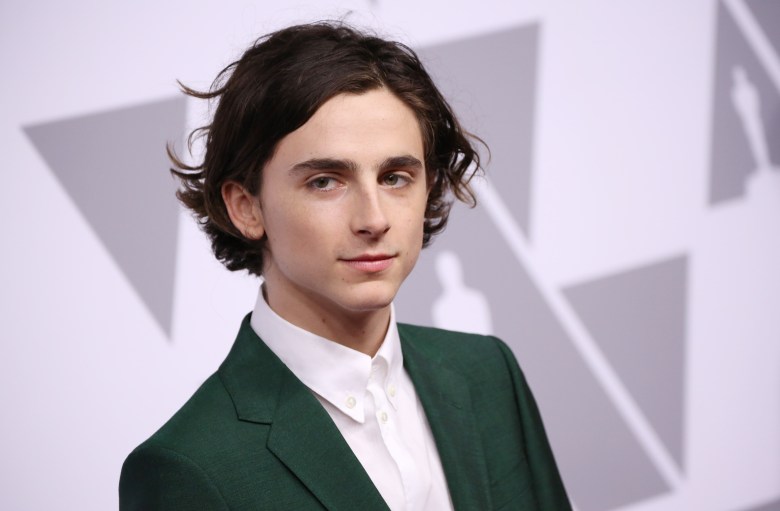 Timothée Chalamet earned his first Oscar nomination this year thanks to his breakout lead performance in “Call Me by Your Name,” and it’s possible the 22-year-old actor will have another nomination under his belt this time next year. Amazon debuted the first footage from its upcoming awards contender “Beautiful Boy” at CinemaCon, and the first reactions from press are overwhelmingly positive.

“Beautiful Boy” marks the English-language debut of Belgian director Felix Van Groeningen, best known for “The Broken Circle Breakdown.” The story is adapted two memoirs: David Sheff’s biography “Beautiful Boy: A Father’s Journey Through His Son’s Addiction,” recounts watching his son Nick struggle with a methamphetamine addiction; Nick Sheff authored, “Tweak: Growing Up on Methamphetamines.” Steve Carell is playing David in the movie, while Chalamet takes on the role of the troubled son.

Amazon premiered a scene featuring an emotional confrontation between Chalamet and Carell’s characters. After Nick has relapsed many times, they meet in a diner. Withdrawing Nick parrots recovery speak, boasting that he’s five days sober. But he’s slurring his words, and becomes distraught when David refuses him money, sneering that his mother should have gotten custody of him. David offers to put Nick up in a hotel, but Nick bolts from the restaurant, before they place an order. Press in attendance called the footage “devastating” and “harrowing,” with some saying Chalamet is destined for the awards conversation. Carell was on hand at CinemaCon, while Chalamet appeared briefly via Skype from London. Of the memoirs, Carell said, ” They were both stunning in the sense that — and the movie tries to depict this — there are no easy answers. It’s not presented like the cinematic version of this problem, or this relationship. It felt very true to me, and very real.”

A bad audio connection kept the crowd from hearing Chalamet’s response. “Rest assured that whatever he just said was incredibly articulate,” assured Carell, who called his onscreen son “one of the most profound young people I’ve ever met.”

“Beautiful Boy” opens in select theaters October 12. Check out reactions to the first footage of Chalamet below. IndieWire’s editor-at-large Anne Thompson reacted by saying both Chalamet and Carell are “Oscar-bound.”

Wow, just watched an incredibly emotionally-charged scene between Steve Carell and Timothee Chalamet in #BeautifulBoy, about a father and son’s journey through addiction and recovery. Carell on stage now w/ Chalamet on Skype#CinemaCon pic.twitter.com/OMDNqn9hNW

I just watched an emotionally charged scene from #BeautifulBoy with Timothée Chalamet & Steve Carell. This movie is going to emotionally destroy me. Also, just go ahead & give Timmy the Oscar. It’s going to be hard for anyone to top him. #CinemaCon

Steve Carell says #BeautifulBoy shows no “easy answers” re: addiction – “this is not presented as the cinematic version of this problem or relationship, and that feels very true to me, and real.” Praises Timothee Chalamet as “one of the most profound young people I’ve ever met.”

Amazon just premiered a powerful scene from ‘Beautiful Boy’ starring Steve Carell and Timothée Chalamet. It’s about a father and son where the son is a drug addict and it’s not a sugar coated version of the story. Arrives this fall in theaters. Based on true story. pic.twitter.com/LC3HnyI749

We just saw a powerful scene from #BeautifulBoy with Timothee Chalamet & Steve Carrell. Looks like it’s going to be a major tearjerker. #CinemaCon pic.twitter.com/HGXatEQ9PJ

He’s also beamed in Live to talk with co-star Steve Carell who calls him the best, “just seeing his face, I smile.” pic.twitter.com/gnw1ExHG3L

Watching Steve Carell and Timothee Chalamet in this incredibly raw, emotional scene from upcoming #BeautifulBoy. Both look like they deliver such moving performances. #ImNotCryingYoureCrying

They screened a scene from BEAUTIFUL BOY. Looks very good, but also emotionally harrowing. Steve Carell is onstage (Timothy Chalamet is onscreen via Skype). Carell on Chalamet: “This guy is just the best.”