From "Firefly" to "Doctor Who," these are the voyages of television's top spaceships. 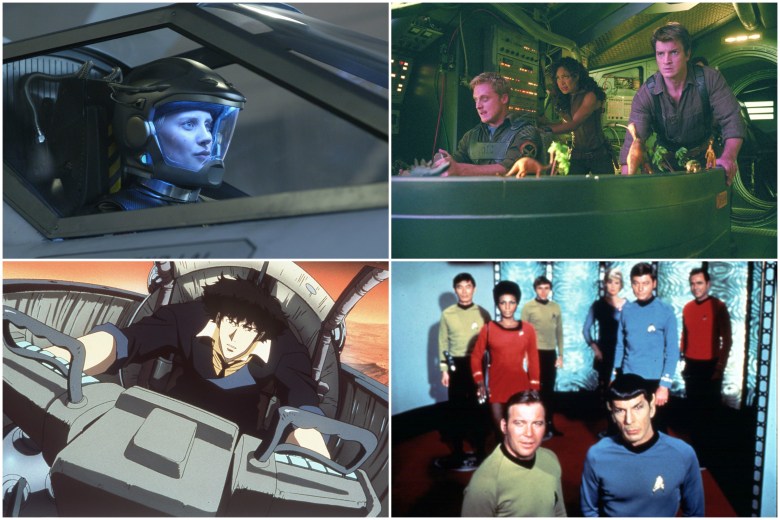 Technically, yes, the TARDIS is one of television’s most famous time machines — but since the beginning, the Doctor has used it to cruise around space as well. And that’s led to plenty of epic adventures set on various spacecraft in the future as well as the past (given how aliens like to drop in on planet Earth no matter the time period). Some of the modern era’s strongest episodes, such as the David Tennant-starring “The Impossible Planet”/”The Satan Pit,” the Matt Smith-starring “The Beast Below,” and the final installments of Peter Capaldi’s run, were all about the adventures to be had outside the TARDIS — not to undersell how great a ship the TARDIS is, that is. The grandaddy of them all, it’s impossible to imagine what the state of science fiction on TV would be like today without Gene Roddenberry’s groundbreaking creation. While the special effects have been updated along the way, the spark introduced into the public sphere by the adventures of Captain Kirk (William Shatner) and his crew was a real inspiration for an entire generation of fans, ensuring it a place on this list. Dominique Tipper in “The Expanse.”

“The Expanse” is, at times, almost too dense a universe. But if you’re willing to dig into the interstellar politics and get to know the vast ensemble, the Syfy drama based on the novels by James S.A. Corey becomes a thoroughly immersive ride. The thrills that come with the show’s unique take on space, with a heavy emphasis on how G-forces affect the human body when blasting from planet to planet, are less driven by spectacle and more by “oh god they survived that.” But the show doesn’t lack for moments of wonder, all thoroughly grounded by both the real world expectations as well as the increasing alien weirdness of the series to date.

Never afraid to play around with sci-fi tropes, Matt Groening’s “Futurama” featured no shortage of fun space adventures layered with plenty of in-jokes and references — but it was also really well-done animation filled with space fun, with plenty of pathos to go around as well. Much of the action was in fact Earth-based, but the Planet Express team did get into plenty of trouble in outer space (especially when Zapp Brannigan got involved), and every time, it was a delight. Produced with the help of the Jim Henson Company, “Farscape” is the only show on this list that features everything you might hope to see in one of TV’s most batshit sci-fi series: an epic love story, space Nazis, a living ship that gives birth at one point, aliens who fart helium, an episode that features an extended “Looney Tunes” homage, and some truly insane plot twists. The spirited rebels who astronaut John Crichton (Ben Browder) encounters after getting sucked down a wormhole create an unconventional family unit that found themselves scrambling to survive in a universe gone awry. While messy at times, “Farscape” was rich with charm and adventure. One of the all-time great anime series, this romp set in the year 2071 features plenty of action, but never skimped on character development. The core team of lovable bounty hunters (AKA “cowboys”) cruising around the galaxy trying to survive in a messy society where chaos reigns had plenty of backstory to go around. Oh, and it also had one of the best soundtracks of all time— the jazzy tempo of its main theme might have seemed incongruous except it just ensured the show’s unique tone. And there was a hyper-intelligent corgi named Ein! “Cowboy Bebop” had everything you could possibly want in a show. Even before Captain Sisko (Avery Brooks) got hooked up with the warship Defiant in Season 3, “Deep Space Nine” had proven its ability to deliver space drama within the “Trek” universe, with a unique approach that took real chances with its setting (a space station in complicated political territory) and characters (to date one of the most diverse of any “Trek” series). But once the show added that element, “Deep Space Nine” became truly engrossing space drama — while technically on the other edge of the universe, it was always relatable; even as war raged on, and even as some of “Trek’s” core principles were challenged by some daring storytelling. “Deep Space Nine” still managed to find the capacity for wonder, even in its darkest moments. If “Battlestar Galactica” had ended with its second season, it would probably take the number one slot on this list, as the series in its early years was a perfect blend of grounded, gritty, tough drama and the big bold storytelling that comes with the best space series. Unfortunately, the show began to flounder midway through Season 3, never really regaining the momentum following the end of the series-defining “New Caprica” arc, and by midway Season 4 the show had descended into near-complete nihilism. Still, when the show was at its height, it was arguably the best show on television, challenging everything we thought space-set television was capable of doing. Funny how so many shows set in space have a hard time surviving beyond a first season — but still manage to capture our imagination along the way. Joss Whedon and Tim Minear famously blended classic Western tropes with the sort of kick-ass space adventure that (eventually) made it a legendary cult favorite, leading to a follow-up feature film and permanent placement in the sci-fi hall of fame. We’re not going to say that “Firefly” holds up as well as it could — the use of Mandarin by a cast that doesn’t include a single Asian person is just one of many problematic elements. But as a space adventure series that captured both the thrill of the final frontier as well as the dangers that came along with it, “Firefly” did more with 14 episodes than other shows have done with 10 seasons.

This Article is related to: Television and tagged Battlestar Galactica, Firefly, Star Trek