From the Oscar-winning to the criminally underrated, it all starts on the page for these knockout scripts. 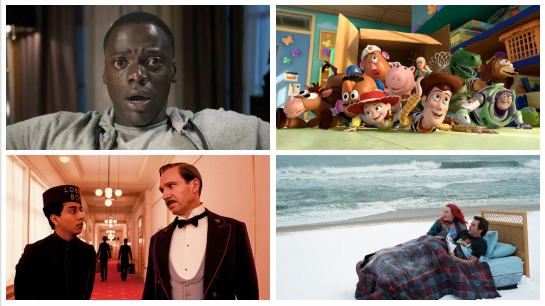 “Manchester by the Sea”

What’s often overlooked when discussing “Manchester by the Sea,” one of 2016’s best films (and certainly the most wrenching), is how damn funny it is. Kenneth Lonergan’s screenplay balances almost every heartbreaking scene with a moment of levity, most of them courtesy of Lucas Hedges (two words: “basement business”); this proves crucial, as the movie might otherwise have simply been too sad for most people to get through. Every tear is earned here, whether it be from laughter or (more often) grief, with Lonergan showing time and again that “You Can Count on Me” and “Margaret” were far from flukes. He’s aided greatly by his cast, especially Casey Affleck and Michelle Williams, who in one devastating scene bring his words to life in a way that’s both difficult to endure and impossible to turn away from. That description applies to “Manchester” as a whole. —Michael Nordine Facebook isn’t cool. You know what’s cool? A movie about Facebook. Now regarded as one of the finest films of the aughts, “The Social Network” was dismissed sight unseen by many due to its subject matter. And why not? The social-media site had only truly risen to prominence a few years earlier, and it was hard to imagine David Fincher’s follow-up to “The Curious Case of Benjamin Button” receiving such overwhelming acclaim. But everything came together nearly perfectly on the film, thanks in large part to Aaron Sorkin’s Oscar-winning screenplay. Its finds the loquacious scribe at his best, with all the verbal takedowns (“If you guys were the inventors of Facebook, you’d have invented Facebook”) and rapid-fire back-and-forths we’ve come to expect (and, more often than note, love) from him. Sorkin’s portrayal of Mark Zuckerberg was hardly flattering, but recent headlines suggest it may have been too sympathetic. —MN While on the awards trail for “Get Out,” Jordan Peele spoke a great deal about how the truth was the essential ingredient that allowed his film to deliver its complex perspective on race to a mass audience. And while Peele put on screen undeniable realities and a sensibility sorely missing from mainstream entertainment, he walked a narrative tightrope that required as much craft as insight. With a zero margin for error, the writer-director constructed a script where the audience’s understanding of what Chris (Daniel Kaluuya) is thinking and feeling is always clear. Hitchcock-like in its execution, and playing off genre and audience expectation (especially about how racial dynamics are traditionally portrayed on screen), the twists and turns of “Get Out” are not only gasp-inducing; each one reveals a new layer to its exploration of systematic racist belief systems. Genre filmmaking this entertaining and yes, truthful, can only be fully appreciated when you breakdown the building blocks of how Peele pieced it together. – CO It’s always wonderful to take a walk through Charlie Kaufman’s mind, and his dizzying examination of writer’s block in “Adaptation” is one of his finest works. Taking a fictionalized version of himself for a spin, “Adaptation” follows a “Charlie Kaufman” as he struggles to write a film adaptation of Susan Orlean’s “The Orchid Thief.” Meanwhile, his slacker twin Donald starts fostering his own dreams of screenwriting stardom, and the films splinters into a metafictional account of art, lust, and creative struggle. While a brave cast — lead by Nicolas Cage, Meryl Streep, and Chris Cooper — and Spike Jonze’s inventive direction made a timeless film, the creative backbone was all Kaufman. — WE “Eternal Sunshine of the Spotless Mind”

Sans fantastical premise and sight gags — Zap memories from your brain once they turn unpleasant! Plunge Jim Carrey and Kate Winslet into an oversize kitchen sink! — Charlie Kaufman’s script would remain a masterpiece deserved of its Oscar. An “Annie Hall,” for the post-privacy age courtesy of genre-chameleon Michel Gondry, “Eternal Sunshine of the Spotless Mind” refashions mundane moments as romantic overtures. Self-aware Joel and Clementine twice woo each other over fumbled train greetings, swiped chicken drumsticks, and stargazing hokum. When they break up, each has every reminder of the other erased, a serious-sounding procedure carried out by cavorting technicians (Kirsten Dunst, Mark Ruffalo, and Elijah Wood). At its midpoint, Joel wants to abort but can’t, so Clementine plays tour guide through the still-untouched corridors of his mind, learning all his secrets as she counsels him through an imagined “goodbye.” Carrey has never been more grounded or sincere, and Winslet’s verve is enough to inspire countless treks to Montauk. —JM

This Article is related to: Film and tagged Screenplays