And you better believe that Det. Harry Bosch will continue to do his job, dammit. 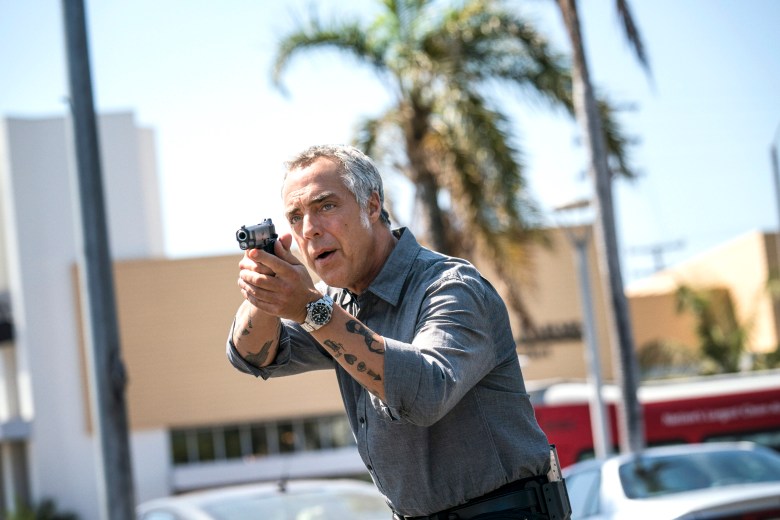 In its fourth season, “Bosch” remains as good and solid as its namesake hero. The creation of author Michael Connelly, good ol’ Det. Hieronymus “Harry” Bosch (Titus Welliver) is a no-excuses cop who is haunted by his past, but you wouldn’t know it because he’s also incredibly businesslike. He’s not crippled by his obsessions nor addictions, he’s not a quirky savant with exceptional detecting skills, and he’s not in any way an obnoxious attention seeker.

Instead, his appeal is that he does his job without fanfare and as honestly and implacably as possible, while occasionally overextending himself. And so too does “Bosch” the series. It’s why it was Amazon’s top-watched original series for several years until “Sneaky Pete” sneaked in: “Bosch” is so reliable in how pure and straightforward it is that a series-altering event in the first half of the season is actually shocking when it happens. More on this later, but we promise no spoilers.

Despite the viewer’s unshakeable faith in Bosch, several situations have led to his trustworthiness being publicly questioned. This appears to be his lot in life, so it comes as no surprise that in Season 4 he’s assigned to head a task force for one of the most controversial murders to hit the City of Angels. High-profile black lawyer Howard Elias (Clark Johnson) has made it his mission to expose police brutality and corruption in the LAPD. When he’s found murdered while aboard the Angels Flight funicular railway car, Harry has to step in to find the killer.

Someone on the LAPD may even have an additional reason to want Elias gone. The murder takes place on the eve of the trial for his client Michael Harris (Keston John), who has brought a civil suit against the LAPD for their violent interrogation tactics. The so-called Black Guardian case could expose and ruin the cops who were guilty of harming Harris.

Meanwhile, the season also picks up a couple of threads from the previous installment: Bosch believes that his mother’s murderer may now be the head of the police commission, Bradley Walker (John Getz), and the Koreatown Killer is still at large, riding around on a bike. Add to that the ongoing stories about Det. Jerry Edgar (Jamie Hector) recovering from being shot, Bosch’s relationship with his teenage daughter Maddie (Madison Lintz), and her mother Eleanor Wish (Sarah Clarke) dealing with marriage woes, and it’s a lot to get through. Unlike other binge-model shows that must fulfill a certain episode count, “Bosch” doesn’t suffer from unsatisfying padding or contrivance to keep the story going. Every story feels authentic and worthwhile to the season as a whole. After all, both life and police work are messy and don’t stay confined in discrete boxes. And “Bosch” tackles its stories with an unhurried and organic way. Unfortunately, juggling that many stories often means that sometimes the C and D plots are so reduced that they feel like afterthoughts or interruptions in certain episodes. In these instances, these mere dribbles would’ve been better to back-burner altogether, just waiting for another episode to tell a more meaty, impactful update.

When the show takes the time to service its stories fully, it does so impeccably. Bosch’s family life is one of the show’s greatest strengths because neither his daughter Maddie nor his ex Eleanor have fallen into secondary, cliched status. In particular, Maddie demonstrates with each passing day that she is absolutely the product of her tough and commanding parents. Precocious yet practical, she is far savvier and level-headed than they can comprehend at times. And yet, she never comes off as a stereotypical rebellious teenager who disdains their love and guidance.

Of course, adding to the show’s sturdy authenticity are all the references and nods to Los Angeles. Season 4 doesn’t pass up any chance to feature the Angels Flight even beyond the initial crime scene investigation and, in fact, gives it a place of honor in the already stellar opening credit sequence for this season. When creators or actors describe a show’s setting as another character, that isn’t just ludicrous and inaccurate, but downplays its pervasive power. But here, Los Angeles is a ubiquitous presence that fuels its players.

“He had the city in his blood, like you I think,” Walker at one point tells Bosch. This feels like a far more accurate assessment of Los Angeles’ influence on its citizens. It pumps through their veins, it makes them fight and protest, it makes them crave Sugarfish, Eggslut, and In ’N’ Out’s secret menu items. The love of LA and the strong storytelling, not to mention the top-notch characterizations and performances, remain as consistent as ever. What makes “Bosch” one of the best cop shows on the air hasn’t changed since its first season. And yet, within the first five episodes that Amazon had given critics for review, a series-altering event shakes up the show. Its significance makes it imperative for fans to watch as soon as possible so as not to be spoiled.

Despite its impact, the event is natural, logical, and connects thematically to what already exists on “Bosch.” While the show will have to alter its course somewhat at this point, again, what makes the show great will not change and in fact, makes it more complex. And as for Bosch himself? You better believe he’ll continue to do his job, dammit.

”Bosch” Season 4, along with its previous three seasons, is currently streaming on Amazon Prime.

This Article is related to: Television and tagged Amazon, Bosch, TV Reviews