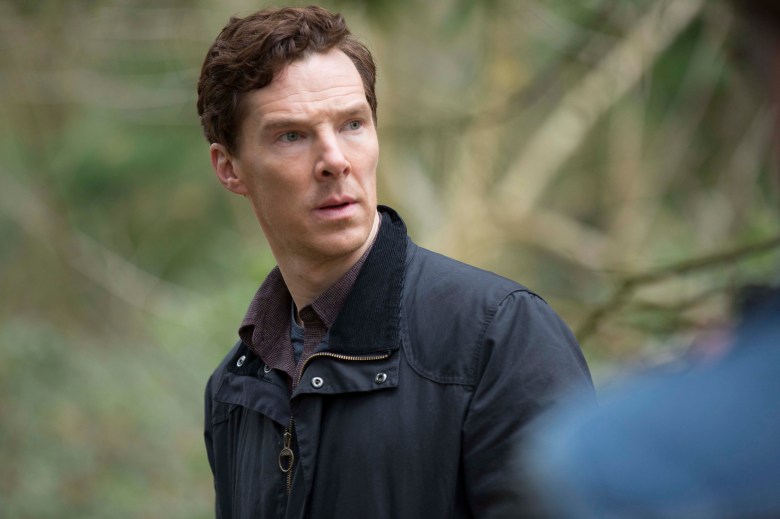 Benedict Cumberbatch, “The Child In Time”

“The Child in Time” is a challenge to watch, especially in the beginning as it spins its tale of loss by shuttling back and forth chronologically. We see the emotionally spare present-day life of children’s author Stephen Lewis (Benedict Cumberbatch) juxtaposed with flashbacks to the despair of the previous year, when his young daughter Kate goes missing while she’s out with him.

As brutal as it is, dipping back in time over and over again serves several purposes. It clues viewers in to the breakdown of Stephen’s marriage with grieving wife Julie (Kelly Macdonald), it keeps the pain fresh for viewers so that we understand Stephen’s daily purgatory in the present, and it also introduces the concept of how time is not merely a linear experience when it comes to emotions. Time may heal all wounds, but wounds can also be reopened and experienced in new ways. Check out a trailer for the movie below:

At this point, we would be remiss not to mention IndieWire favorite series “The Leftovers,” which echoes this story: A loved one vanishes in an instant without a trace, without explanation, and without real closure. How one decides to continue with life — to give up and move on or hold out for the hope of being reunited — is central to “The Child in Time,” as well. The main difference, however, is that it’s Stephen who can’t let go of the idea that he will find Kate, perhaps because he feels responsible for losing track of her in the first place. And as with “The Leftovers,” this tale will be relatable for anyone who has experienced loss. Death might be inevitable, but that doesn’t make it easier to grapple with for those left behind. Mourning does not follow a set schedule.

Stephen Butchard’s adaptation of McEwan’s novel doesn’t waste a scene. Every line of dialogue rings so true it makes the inner ear bones hum. Fortunately, Cumberbatch and Macdonald know how to communicate the authenticity of every emotion and situation in understated yet powerful ways. As much as their anguish and despair can rip out our souls, they are just as devastating in the smaller moments, such as when they attempt a sweetly awkward reconciliation.

The character Charles Darke (Stephen Campbell Moore) from the novel makes it into Butchard’s script in a significant enough way to be disturbing, but perhaps not as fully as he should be. His trajectory includes themes of childhood and loss, but an essential piece to his story has been dropped. His wife Thelma (Saskia Reeves), who was a quantum physicist in the novel was able to weigh in on the concept of time, but here is stripped of that profession. The Darkes matter, but their scenes are jarring in their unevenness to the whole of the story, and the all-important temporal element (keeping in mind the movie’s title) has been lost. Director Julian Farino makes the most of his 90 minutes to create a dreamy, otherworldly atmosphere and meandering pace that doesn’t feel rushed to reveal how Stephen can find peace. Much like how we see Stephen thrust back and forth from agonized and upset to cautiously numb, the audio goes from raucous and frenzied to nonexistent except for the tinkling of a piano’s keys, and then back again. And again. And again. It approximates Stephen’s two states of being: There’s the real world and then there’s the real world once removed, experienced through some sort of veil. Stephen is not quite there, he’s just out of reach, and often framed in doorways and glimpsed through a break in the crowd as a result.

Investing in the alienation and the floundering attempts to find meaning is crucial to embracing what “The Child in Time” is. The viewer must go along with Stephen on this strange and intimate journey because only by enduring the torture and confusion can the catharsis occur. There is hope, there is another side for those left behind, and for “The Child in Time” it is hard won, but builds to this conclusion deliberately and beautifully.

This Article is related to: Television and tagged PBS, The Child in Time, TV Reviews