The analog theater chains are being pulled into the digital future by MoviePass and other disruptors. 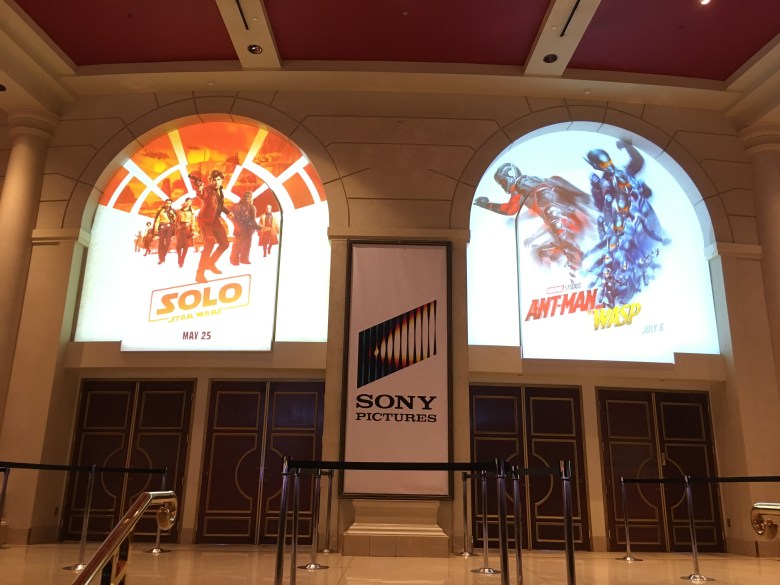 On day one at CinemaCon — the annual exhibitor convention at Caesar’s Palace in Las Vegas — disruptors were making rooms full of theater executives sit up and listen. “If your company has a chief data officer, raise your hand,” said one Palace ballroom moderator. Hardly any hands went up.

The theater owners ingested phrases like “conversion pixel” and “big data,” as they heard how crucial it is to collect, store and correctly interpret customer data. The disruptors at this year’s CinemaCon are not only the controversial online subscription service MoviePass (with its valuable data), but UK chain Cineworld’s hard-driving Israeli CEO, Moshe (Mooky) Greidinger, Mexico’s Cinépolis mogul Alejandro Ramírez Magaña, and South Korea’s Jeong Seo, CEO of CJ CGV, which is building its own innovative high-tech theaters, including two in Los Angeles.

Truth is, “mature” North America won’t remain the number one box office market in the world for long. (China outpaced it in the first quarter of 2018.) Attendance was down in 2017, as rising ticket prices struggle to keep revenues stable. The domestic gross has hovered around $11 billion for three years now, while global numbers continue to rise exponentially and home video continues its decline. North American theaters show the slowest growth of the big world markets, followed by the U.K., while Asia sprints forward.

In five years, said researcher David Hancock, Asia (including China) will notch 45 percent of the global box office. And China sells 85 percent of its tickets online, while the U.S. notches 35 percent. Europe is around 50 — without third-party middle-men like Fandango, Atom and MovieTickets. Theaters have been more focused on technological innovation — which drives up ticket prices — to improve the big-screen experience, from 3D and IMAX and Dolby Atmos to immersive 4D shaky seats and Ang Lee’s fast frame rates. (Barco Escape’s three-wall screens failed to lure content partners, while similar ScreenX is doing better.) Samsung just introduced three giant LED screens, which throws away the entire concept of projecting an image on a white screen. (Can’t audiences watch TV at home?) “Experiential cinema is growing,” said Hancock. “As exhibitors test the technology, content will be key to the long term.”

Needless to say, like the studios, the big exhibition chains are looking overseas for growth. And consolidation is also the key to survival: as Disney swallows Fox, so has UK’s Cineworld acquired Regal for $3.6 billion dollars, creating the second-largest theater chain in the world (China’s Wanda, which owns top American chain AMC, is number one), with 9542 screens in 10 countries. Twenty-year Regal veteran and CEO Amy Miles and her management team are out, replaced by Mooky Greidinger, whose Cineworld is expected to bring to America its MoviePass-style subscription service costing about $25 per month. Cinemark already boasts a subscription Movie Club, and other chains will follow. The future is about using loyalty programs to target marketing to the right consumers. “Recommendation engines send the right message at the right time to the reach the customer,” said Stefaan Claes,  International CRM & Digital Marketing Director of Kinepolis Group.

The advantage of selling tickets on your own website is that you can capture and control your own data instead of trusting third parties. “Which companies are the best to slice and dice the data?” asked Cinemark’s Valerie Shortall. “And trust with your customers’ privacy, working with you as a partner?”

“It’s all about trust,” said Claes. “Who do you give your data to and for how long? Things have happened with data that should not have happened.”

Disney has the advantage of huge fan bases with millions of followers for Marvel, Star Wars and Pixar. “It drives transactions,” said David Seidel, Disney VP of cinema partnerships.

“Data matters,” said Hancock. “It gives you a better understanding of your customers.” So why trust a third party with your precious data — and risk violating your customers’ trust? (Not mentioned was how much theater operators are as dependent on Google and Facebook as everyone else.) Celluloid Junkie’s Patrick Von Sychowski noted that online disruptors Amazon and Netflix are not only spending money on content, but “have created a personalized way to reach audiences all over the world.”

Clearly, theaters are struggling to be as good as these video platforms at connecting cinemas with audiences. While MoviePass may not survive its bold but financially fragile business model, it took this disruptor to shake up the industry and show them not only what a millennial-friendly subscription movie service could look like, signing up over 2 million customers, but how to collect data on their customers. Five years ago, this was a foreign concept. Now it’s a necessity.

This Article is related to: Film and tagged Box Office, CinemaCon, Exhibition