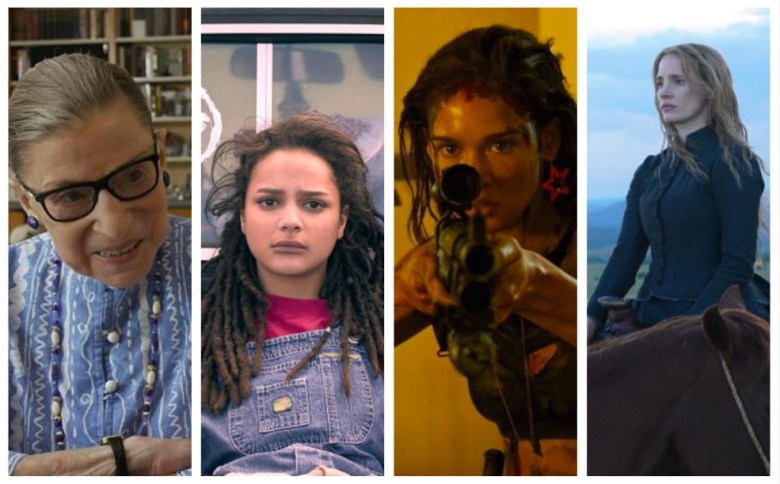 This week, IndieWire will be rolling out our annual Summer Preview, including offerings that span genres, niche offerings for dedicated fans, a closer look at festival favorites finally headed to a theater near you, and plenty of special attention to all the new movies you need to get through a jam-packed summer movie-going season. Check back throughout the week for a new look at the best the season has to offer, and clear your schedule, because we’re going to fill it right up.

Today — a selection of features directed (or co-directed) by female filmmakers to get excited about seeing, including works from rising stars, indie favorites, and more. When she was growing up, Ruth Bader Ginsburg’s beloved mother Celia gave her two lessons to guide her through life: “Be a lady” and “Be independent.” That two-pronged approach appears to have influenced every aspect of the Supreme Court justice’s life, both personal and political. In Betsy West and Julie Cohen’s wide-ranging “RBG,” Ginsburg’s life — and its many lessons, both learned and taught — come to entertaining and energetic life. It’s a fist-pumping, crowd-pleasing documentary that makes one heck of a play to remind people of Ginsburg’s vitality and importance, now more than ever. “RBG” serves as a compelling Ginsburg primer, and West and Cohen are understandably interested in driving home just how fully she fought back sexism at every stage of her professional life, from her experience at Harvard Law to her first steps into full-time work to her Supreme Court appointment. Yet it’s the insights into her personal life that feel the most vital, moving “RBG” beyond the kind of information you could read on a Wikipedia page (as ably and entertainingly rendered as they may be on the big screen). -KE Coralie Fargeat’s aptly-named feature film debut follows Matilda Lutz as Jen, initially drawn as a shy wallflower who is desperate to be loved (especially by her boyfriend, played by Kevin Jannsens), who is pushed to wild extremes when she’s violated by the man she loves and his loutish group of friends who unexpectedly descend upon what was meant to be a quiet weekend away. Jen’s rage is complete — and complex — and the heavily genre-influenced film finds both its fun and shock value in her sudden evolution into a badass final girl for the ages. How shocking is it? It made at least one TIFF attendee faint. At least one! -KE Rom-coms might not be getting as much love as they used to in the theatrical space — and, really, who doesn’t like watching two people fall in love on the big screen, aided by misunderstandings and high jinks and mix-ups and a Top 40-friendly soundtrack? — but Netflix hasn’t shied away from the format in the slightest. Its latest funny, sexy outing sounds like a throwback to rom-coms from the early aughts, and we mean that entirely as a compliment. Directed by Claire Scanlon (“Hello Ladies!” and “The Office”) and written by Katie Silberman (who also penned Olivia Wilde’s upcoming feature directorial debut, “Booksmart”), the film reteams “Everybody Wants Some!” stars Harper (Zoey Deutch) and Charlie (Glen Powell) as a pair of overworked personal assistants whose lives are ruled (and sometimes ruined) by their demanding bosses. They hit upon a banger of an idea — what if they set up their bosses, sending them off on a romance that will eat up tons of free time — but we’re guessing that they might just find some big love along the way. -KE “Country Strong” director Shana Feste returns with a very funny, very personal slice of life that’s, well, sliced right from her own life. Vera Farmigia is on board as the Feste-surrogate, who is forced to embark on a wacky road trip with her drug dealer dad (Christopher Plummer) that offers up both big laughs and heartwarming emotional revelations. The film also features “A Monster Calls” breakout Lewis MacDougall as Farmigia’s son, assuring the film can at least boast one of the best on-screen families the summer has to offer. The film debuted at SXSW, where our Eric Kohn wrote that “it’s rewarding enough to hang with these characters and roll with their mudslinging…its message of learning to love your relatives in spite of their flaws registering on a far simpler scale than the undercurrent of multi-generational resentment percolating throughout the story.” -KE It’s no less than Jessica Chastain who serves as the eponymous woman at the heart of Susanna White’s latest TIFF premiere (which will next screen at this month’s Tribeca Film Festival), a historical drama that follows the fascinating true story of portrait painter Caroline (also known as Catherine) Weldon (Chastain). The activist and artist dedicated her life to helping Native Americans, and in the summer of 1889, she decamped for Dakota Territory to live among the people she was so passionate about helping. White’s film is mostly occupied with chronicling Weldon’s friendship with Sitting Bull (Michael Greyeyes) and how it eventually led to her painting his portrait and her closer involvement with the native people during a time of tremendous pain and pressure. At TIFF, our David Ehrlich wrote of Chastain’s full-bodied performance that “no contemporary American screen actress has more consistently — or more forcefully — used her platform to champion feminist ideals, and Chastain’s performance is a worthy addition to the cause. As portrayed here, Catherine is headstrong and full of heart; she’s a smart woman who’s been liberated from her late husband and refuses to ‘know her place.'” -KE A new film from director Debra Granik (“Winter’s Bone,” “Stray Dog”) means something unexpected and thoughtfully crafted that you don’t want to miss. Granik once again welcomes audiences into the world of characters we don’t see on the big screen in a story of a father (Ben Foster) and his teenage daughter (Thomasin McKenzie) who happily live off-the-grid on the edge of Portland, Oregon, until their cover is blown and they are forced to journey into the wilderness. The last time Granik found a teenage actress to anchor her film it was Jennifer Lawrence, and early reviews indicated she has found another potential breakout talent with the New Zealand-born McKenzie. The film debuted at Sundance in January, and is now poised for a Cannes premiere, where Granik will screen it as part of the prestigious Directors’ Fortnight section. –CO

Not content to make just one insightful, heartbreaking, amusing, and shocking documentary about the inner workings of American wealth, “The Queen of Versailles” director Lauren Greenfield returns to the big screen with yet another candy-colored look inside everyday greed. For “Generation Wealth,” Greenfield turns her attention to a wide swath of American dreamers, many of them reaching far beyond their means to live up to some expectation of “luxury” and all its trappings. Greenfield has been working on the project for decades, and the final result is a far-reaching doc that examines not just the root and effects of greed on her countrymen, but around the world. It’s precise, eye-opening, and absolutely chilling. -KE One of the boldest and most invigorating American films of the 21st century, Josephine Decker’s “Madeline’s Madeline” is an ecstatically disorienting experience that defines its terms right from the start and then obliterates any trace of traditional film language, achieving a cinematic aphasia that allows Decker to redraw the boundaries between the stories we tell and the people we tell them about. The story of a single mother Regina (the multi-talented Miranda July), her irrepressible teenage daughter Madeline (major newcomer Helena Howard), and the unspecified mental illness that drives a wedge between them when the latter joins an experimental theater troupe, this mesmeric tour de force claws at its premise with incredible precision, using. The result is an experimental movie with the emotional tug of a mainstream hit, a fragmented coming-of-age drama that explores the vast space between Jacques Rivette and Greta Gerwig in order to find something truly new and ineffably of its time. —DE When “The Wolfpack” played Sundance in 2015, it was one of the buzziest hits of the festival. One of those rare documentaries that proves truth is always stranger than fiction, the film made first-time director Crystal Moselle an instant indie superstar. Three years later, Moselle is making her narrative debut with “Skate Kitchen,” which follows a vibrant crew of girl skateboarders. Moselle casts many first-time actors, maintaining her hallmark authenticity and knack for highlighting real life characters. Variety’s review compared “Skate Kitchen” to the 1986 skater film “Thrashin’,” praising its “millennial, vérité spin” on an “an irresistible hangout movie.” Jaden Smith plays a supporting role, which is certain to draw the hip young set when “Skate Kitchen” hits theaters this summer. -JD “Appropriate Behavior” filmmaker Desiree Akhavan returned to this year’s Sundance with a dramatic and timely new feature that speaks to her burgeoning talents behind the camera (good enough to win the Grand Jury Prize, after all). The drama is based on the Emily M. Danforth novel of the same name and follows the eponymous Cameron Post (Chloe Grace Moretz, in one of her best roles ever) after she is caught engaging in sexual activity with her best female friend on prom night. Sent off to a gay conversion therapy center, Cameron must contend with the camp’s two very different heads — the strict Dr. Lydia Marsh (Jennifer Ehle) and her brother Reverend Rick (John Gallagher Jr.), who himself as been through the program, meant to “cure same sex attraction” — while also growing closer to fellow campers Jane (Sasha Lane) and Adam (Forrest Goodluck). Akhavan has already shown her deft hand at taking complicated, complex matters of sexuality and family and turning them into rich, wily final products, and “Miseducation” only continues that trend in satisfying ways. -KE