Filmmakers Marc Silverstein and Abby Kohn describe the "out-there transformation" the four-time Oscar nominee made for her bonkers supporting role. 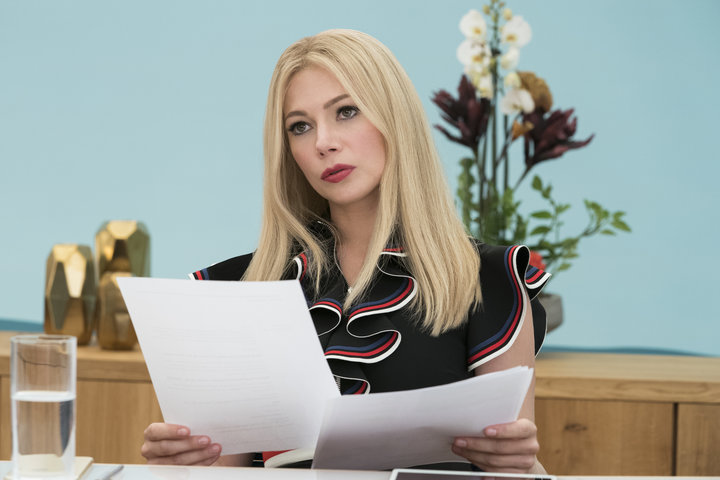 To be clear, actress Michelle Williams is not in need of any kind of breakout. The four-time Oscar nominee has spent the last 25 years (yes, her first credited role was back in 1993) carving out an enviable career in Hollywood, and she continues to show an immense capacity and interest for very different roles and movies. Her upcoming slate includes a star-studded superhero feature (“Venom”) and a long-awaited turn as Janis Joplin in Sean Durkin’s biopic, plus a new Luca Guadagnino murder mystery, a two-handed thriller alongside Chris Pine, and a remake of the beloved Susanne Bier film “After the Wedding.” Williams can do it all, but she can also still surprise the hell out of her audience.

Look no further than Marc Silverstein and Abby Kohn’s “I Feel Pretty,” in which Williams steals every single scene she’s in, thanks to her bonkers work as makeup magnate Avery LeClair. While the film is mostly concerned with the journey of regular gal Renee (Amy Schumer), who cracks her head open during a particularly bad SoulCycle class and suddenly believes she’s the most capable and beautiful woman in the world, it’s Williams’ Avery that turns in the film’s most gut-busting performance.

One of Renee’s first acts as a newly-confident woman is to apply for a shiny new receptionist gig at LeClair’s makeup company — picture an industry giant, like Estee Lauder — after slogging it out in as one member of a two-person team dedicated to online sales. Soon, Avery is a huge part of Renee’s life, and the rest of the film itself. Sporting a delightfully off-kilter fashion sense (she wears at least one outfit emblazoned with a giant puppy face) and a disarmingly squeaky baby voice, every choice Williams makes in the film is both totally insane and perfectly calibrated. She disappears into the part, but it’s also entirely her own.

As Silverstein and Kohn told IndieWire, that was entirely by design, but even they can’t quite believe the work Williams turned in (or how audiences are responding to it). “The voice was written and the part is done as written, but the voice was hers,” Silverstein said. “It was just written super high with a vocal fry, and kind of based on someone that she knows and I know. Just someone we know that’s really successful and smart, but when they get up to talk, you’re like, ‘Whoa. Where did that come from?'” Williams was able to ruminate on the part and it’s inspiration for nearly two months, and she arrived on set to film her scenes during the tail-end of the 2017 summer shoot. By then, she had nailed the voice, but Silverstein shared that the first few days provided them space to play around with her strange physicality and the not-quite-right she holds herself and interacts with others. (Sample Avery line, said as some form of greeting to Renee: “I thought I smelled animal products!”)

“What we found on the first couple of days, which was really fun, [is that] she’s had a sort of coddled life and hasn’t had that much difficulty in terms of getting to where she’s gotten, but we kind of found the idea that like, she’s sort of an approximation of human, in terms of the way she moves,” Silverstein said. “The way she’ll lean on things is the way she’s seen someone do it before, but it’s kind of not right. She was so excited by that and just was always finding the weird.”

And just because it’s a comedic role in a comedic film doesn’t damper the fact that Williams is delivering a thoughtful, show-stopping performance at every squeaky-voiced, weirdly-dressed turn. “Looking at the movie, Amy is totally fearless and she’s giving us something that I don’t think we’ve seen her give before, but Michelle also,” Kohn said. “I was impressed with how fearless she is. She made some bold choices that are brilliant.”

Added Silverstein, “She brought the same thought and intensity that she does to any part to this part, which was kind of crazy to see.”

Williams’ work in the film is so out-of-the-box that the filmmakers swear that some people don’t even recognize its her until the very end. “It’s just this other person now that is just like, it’s not Michelle,” Silverstein said. “There’s been people who have watched the movie who didn’t know it was Michelle at all, and at the end they’re like, ‘Wait. That’s who that was?’ Because it is a just out-there transformation.”

Check out the trailer for “I Feel Pretty” below, which offers a teensy glimpse at the wacky brilliance of Williams as Avery LeClair.

“I Feel Pretty” is currently in theaters.