Oliver has revealed himself as the mystery buyer of numerous items at Russell Crowe's divorce auction. 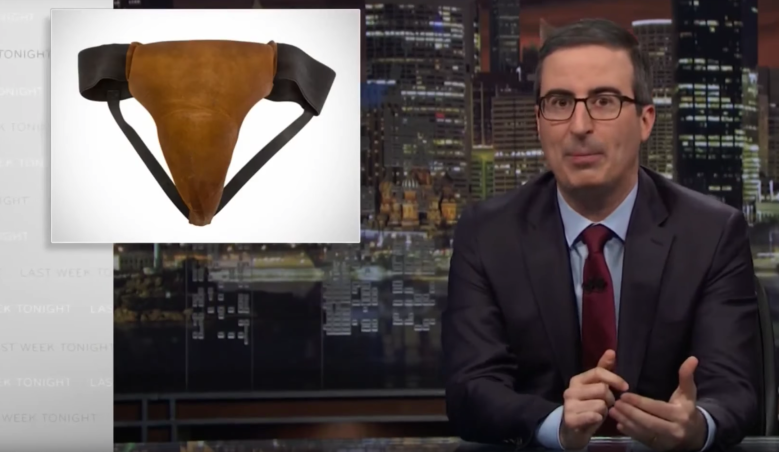 When Russell Crowe announced in March he’d be selling tons of his personal movie memorabilia at an April 2018 divorce auction, many fans were left wondering who would spend hundreds of dollars on such items as Crowe’s “Cinderella Man” jockstrap. Well, it turns out the answer is John Oliver.

During the April 15 edition of “Last Week Tonight,” Oliver revealed himself as the buyer not only of Crowe’s jockstrap, but also of the actor’s “American Gangster” set seat, “Les Misérables” jacket, and “Robin Hood” costume. Oliver’s purchases from Crowe’s auction exceed $10,000, but he brought out his wallet for a good cause: To help save one of America’s last remaining Blockbuster video stores.

As has been previously reported, Alaska is home to over 50% of the country’s final Blockbuster stores. Oliver noted that of the four independently-owned Blockbuster stores left in America, three are located in Alaska. Oliver bought Crowe’s memorabilia so that it can be featured in Blockbuster’s Anchorage, Alaska location as a “fun, movie-themed way to draw people in” and keep its doors open.

“If we do not hear from you in the next two days, I know a transportation museum in Scranton, Pennsylvania that could make room for a new exhibit,” Oliver said.

You can watch Oliver’s hilarious announcement in the video below. “Last Week Tonight” airs Sunday nights at 11pm ET on HBO.

Hey, @blockbuster! Come and get it! pic.twitter.com/C8Cd85pWD8

This Article is related to: Film and tagged John Oliver, Russell Crowe