IndieWire spoke with U.K. filmmaker Andrew Haigh and China-born Chloé Zhao about the joy and difficulties of shooting the exotic West. 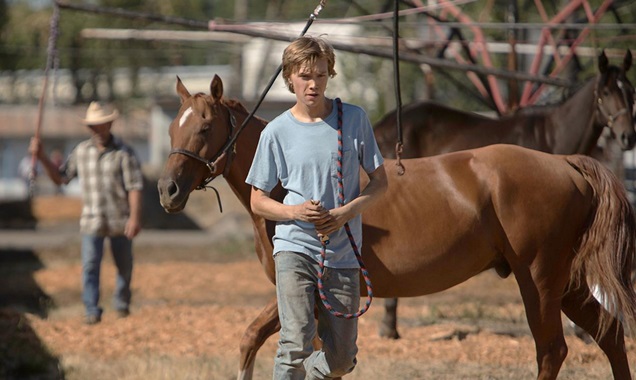 Now we can add U.K. filmmaker Andrew Haigh and China-born Chloé Zhao to their number. Neither set out to comment on classic western genre tropes with “Lean on Pete” (A24) and “The Rider” (Sony Pictures Classics), both of which earned raves on the festival circuit before hitting theaters this month. They shot in the badlands of Colorado and South Dakota, respectively. And both filmmakers explore the relationship between young men, their horses, and the nature that surrounds them. (Their distributors are slowly rolling them out across the heartland.)

New Yorker Zhao shot her 2013 documentary “Songs My Brothers Taught Me” in South Dakota. “The connection, the relationship between human beings and nature, is something that did not come natural to me,” she said. “I didn’t understand it or explore it growing up. In my late 20s, I felt I needed it, I don’t have it in my life. I went out West; Pine Ridge is the place I ended up at. It’s a pretty extreme place compared to New York. It was great for me to have boot camp, to go cold turkey on something I’m used to. It was a great way for me to balance as a person and as a storyteller.”

While shooting, Zhao found herself drawn to charismatic young Lakota cowboy Brady Jandreau. In 2016, he suffered a horrific rodeo accident when a bucking bronco broke his skull, sending him into a three-day coma. When he emerged, doctors told him to give up the riding and competing that defined his life. Now, the filmmaker had a story.

Within months, she started her five-week shoot with cinematographer Joshua James Richards. “I didn’t want to stop after the first film,” she said on the phone. “I wanted to explore even more. It wasn’t enough. I made a lot of mistakes. I wanted to just go deeper. When I met Brady, I had the perfect vehicle for it.”

In one shot, we see Brady as the film character Brady, reacting to video of his very real accident. In another, he whispers a prayer to his beloved horse Gus (played by another horse), after he finds out his father is selling him. It’s magic hour, he gently climbs on his back, and it’s stunning. “That was the very first scene I wrote for the whole movie,” said Zhao. “Brady described going outside when it was still dark, with Gus standing there looking at him, waiting for him to ride him, Gus was the first horse. We cast a different, lighter horse, who was better for magic hour.  At this time the world hadn’t woke up yet. It’s just this boy and this horse, no voices. It gives him all the space in the world to make that decision. It’s no big dramatic moment, it’s completely internal. It was important to us to make sure that nature plays into it — and the beauty.”

It took three magic hours to film the minute-and-a-half scene. (A horse with no halter can easily walk away.) And magic hour lasts for only half an hour.

Zhao walks a delicate tightrope between fact and fiction, using Brady’s real friends and family for her cast of non-pros. His father Tim Jandreau had to agree, of course. And eventually, he did, even though the parent he plays is tougher and less kind. Brady was training wild horses within a month, in a corral 60 miles away from the nearest hospital, getting on them while they were bucking, although he’s given up rodeo. “I trust that Brady knows where his limit is,” said Zhao.

Brady doesn’t have a seizure in his hand; that’s performance. And accident victim Lane Scott suffered a car crash; in the editing process Zhao realized audiences would assume it was a rodeo incident, and let it go.

“Factually, only 40 percent is fake,” she said. “Many things happened naturally. Brady is a specific personality; I knew how he would react and speak within the scene, but 90 percent he’s acting. Real-life scenes are with with Lily, the horses, and improvised scenes with Lane. The real Brady is an upbeat, talkative funny guy, definitely not that somber. He’s playing a character for sure.”

“I like going to a new environment with open eyes,” Haigh said on the phone. He spent four months checking out the Portland, Ore. suburbs where the movie begins, going to the horse races at Portland Meadows, and driving the desert route through Idaho to Denver, choosing locations for the road movie’s second half. This time, given the exotic terrain, he did get a bigger budget: $8 million from UK funding and the BFI, with A24 picking up North American rights early on.

“Lean on Pete” is another story of a boy (Charlie Plummer) in love with a horse. But, said Haigh, “in the end, it was always about Charley, not the horse or the world he’s living in. It’s his isolation. Here was a good kid who wants normal things in life but because of his situation is allowed to fall through the cracks, left alone in the world, desperate and longing. It drew me, I felt for that kid, I was amazed at his reliance, the hope he clings on to in an unhopeful situation. He has a broken heart.”

A lot happens to Charley that makes his life difficult as he pushes to get what he seeks: stability and security. “He’s a good kid who wants to be loved and protected, but doesn’t feel he deserves that love and protection,” said Haigh. Charlie has a relationship with his boss, a craggy racehorse owner (Steve Buscemi) and his jaded female jockey (Chloe Sevigne). However, their ability to help is limited and Charley’s main relationship is with Pete. “He tells things to the horse, his only friend, who he’s so desperate to care for,” said Haigh. “Both are being abandoned by the people who are supposed to look after them, but he doesn’t have the strength to look after the horse.”

Casting was key. Haigh had to find a young actor of a certain age who could carry every scene. “The thing I was most anxious about was not only did I need someone who was incredibly good as an actor, on the cusp of being a child and an adult, but I wanted a Charley who looks grown-up as a little boy lost in the world, who you believe could drive a truck but who is not a fully fledged adult. Charlie Plummer could understand on a fundamental level and was able to bring something subtle and interesting to the role I wasn’t expecting.”

All of Haigh’s films are about a feeling. “I dig into something, and find a way to get there,” he said. “I knew it was about the end of the film. The endings to me are the key moment — in ‘Weekend’, and ’45 Years.’ I know how I want my gut to feel at the ending. Even if I can’t articulate in words what that feeling is, I’m trying to find ways to get there.” Sometimes that means holding back and making the audience work a little harder. “It’s almost an investment between the audience and me as filmmaker. We’re going to do this together, and I will give you some emotional catches that won’t come when you think.”

The feeling he summons is universal and packs a gut punch. “We can all understand that feeling of being alone in the world trying to find ways to not be alone,” he said. As he timed out the different phases in the editing room, Haigh took the chance that holding out for the payoff was the right thing to do. “I was a little nervous,” he said.

Haigh knows that his films “are not for everybody,” he said. “It would be insane to pretend that they’re commercial. Certain people like the way I make films and others do not. I’ve come to terms with the fact that there’s no other way I can make films. If I tried to do it in a different way, it would never work. I have to stop worrying too much.”

For his next logistical challenge, Haigh moves from horses to whales and icebergs as he returns to TV (he was showrunner on HBO’s “Looking”) to shoot a five-part limited TV series on Canada’s Baffin Island for See-Saw Films and the BBC. “The North Water” based on an 1850s whaling mission to the Arctic, is “about men on a boat going into an existential crisis, heading to the Arctic and stranded on the ice,” he said.

This Article is related to: Film and tagged Andrew Haigh, Chloé Zhao, Lean On Pete, The Rider