Wahlberg can't stop talking about Berg's nipples, while Melissa McCarthy does drugs with Muppets in "The Happytime Murders."

By Dana Harris-Bridson and Jenna Marotta 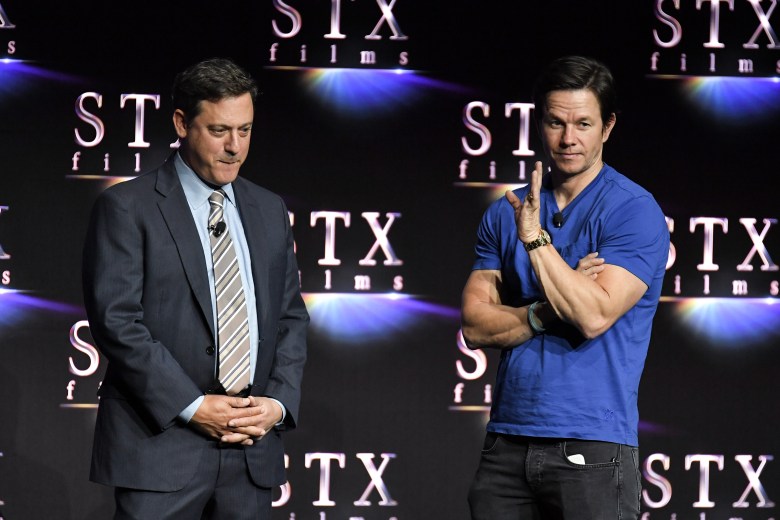 Adam Fogelson and Mark Wahlberg at the STX CinemaCon presentation

The STX Entertainment presentation Tuesday night was a pleasantly relaxed affair, with chairman Adam Fogelson serving as an MC more warm and capable than many of his major-studio cohorts. And when it came to Mark Wahlberg and Peter Berg presenting “Mile 22,” their latest guns-and-muscles drama, Fogelson knew better than to get in the way.

“We’ve had a few glasses of wine,” Berg announced as he came on stage with the film’s stars, who included Wahlberg, Ronda Rousey, Lauren Cohan, and Iko Uwais. “His nipples are razor-hard and sharp,” said Wahlberg. “Maybe that’s why.”

“My nipples are hard tonight,” Berg replied. “I don’t know why.”

Fogelson looked at Berg, who seemed slightly disheveled in a gray polo shirt and jeans. “Didn’t you have a suit?”

With that, Wahlberg returned to his subject. “Hence the hard nipples.”

Fogelson turned to Uwais, best known to American audiences for “The Raid,” asking, “Is this what you expected from American filmmaking? (Uwais confessed that, no, it was not.)

STX, Wahlberg, and Berg have high hopes for the film that is based on the CIA’s covert special ops team, Ground Branch; plans include future installments, a TV series, and VR. For the moment, the crowd loved the boozy and slightly bizarre banter, which seemed refreshingly loose after a long day of buttoned-up studio presentations.

Other talent that came out to support the STX slate of mid-budget, star-driven titles were Shailene Woodley and Sam Claflin for “Adrift” from Icelandic director Baltasar Kormákur (“Everest”), the true-story drama of a couple lost at sea; and Jennifer Garner in “Peppermint” from “Taken” director Pierre Morel in which she gets her Sydney Bristow on to seek vengeance for her murdered husband and daughter.

However, rivaling Berg’s nipples for the evening’s weirdest highlight was “The Happytime Murders,” a Muppets project unlike anything you’ve seen. “When Kermit the Frog and Miss Piggy go home at night, and there are no cameras and no children around, it’s filthy,” said Fogelson. Brian Henson, son of Muppets creator Jim Henson, directed the R-rated project under the Henson Alternative brand of his father’s company.

“The Happytime Murders” footage opened with Detective Connie Edwards (star and producer Melissa McCarthy) listening to Kermit’s “The Rainbow Connection” during a listless drive down a country road. Her passenger and fellow police officer — a blue puppet named Phil Phillips — grouses, “What the fuck is this? It’s like a tampon commercial in here,” angering Edwards enough to fire shots into her radio.

The mismatched duo investigate a spree of killings against the puppet cast of The Happytime Gang, an ’80s TV touchstone. Also populating their world are puppet strippers, streetwalkers, and gamblers who goad Edwards into snorting a mysterious purple substance with Twizzlers. Human characters are portrayed by Joel McHale (an FBI agent), Elizabeth Banks (a burlesque dancer), and Maya Rudolph as Bubbles, a beleaguered secretary unable to cover for her puppet boss while he has sex in his office, a scene that ends with an extended, window-splattering ejaculation. (“It’s like two or three cans of Silly String per take,” Fogelman said.)

STX hopes “The Happytime Murders” proves to be another raunchy hit for the four-year-old company; “A Bad Mom’s Christmas” was the highest-grossing indie of 2017, earning $130 million at the worldwide box office.