The loft crew is three years older when Season 7 begins, bringing about (mostly) good changes for the final season. 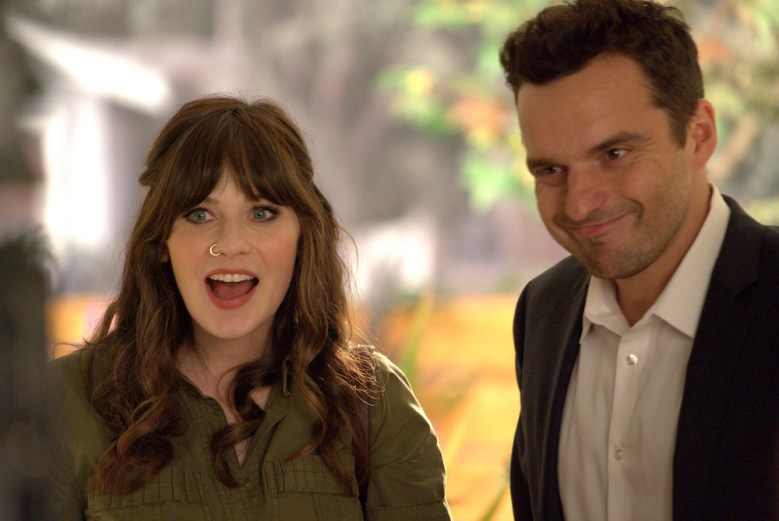 Even with all this forward movement, “New Girl” didn’t change. On the one hand that’s good — who wants a total reboot this late in the game? The three-year time jump isn’t meant to separate the past from the present so much as it allows the writers to build fresh situational comedy from the strong cast on hand. In future episodes of Season 7, they do just that, but the premiere indicates a missed opportunity that could prove problematic in the end. Elizabeth Meriwether and her staff (“About Three Years Later” is penned by Berkley Johnson) reintroduce the same waiting game they’ve always forced on viewers, and that ignores what makes “New Girl” great.

Of course, the issues stem from Nick and Jess. An alternatively hilarious and infuriating couple, the “will-they-won’t-they” partnership has been extended for years beyond its sell-by date. So when Season 6 ended on an imperfect but satisfying romantic moment (one demanded by the lack of certainty surrounding the show’s future), it seemed like the perfect chance to move on from asking if these two doofy lovebirds will ever get themselves together and make it work. The time jump itself felt like a decision rife with possibility. Instead of spending the final season in inertia, viewers could witness the next phase of their relationship. After all, there was a full season with them as a committed couple. Why not use one to explore how Nick adjusts to being engaged or how Jess adapts to married life? It felt like we might get the former for most of the episode: Nick is planning to propose, and he’s just holding off until the right time and the right place: after the book tour, back in the loft where they met. It feels like it’s going to happen in the premiere, and then everyone can move on!

But at episode’s end, he backs off. Jess, oblivious to what Nick’s planning, tells him they’re fine as they are — unmarried, unengaged — so why mess that up? Nick retreats and calls Jess’ dad Bob (Rob Reiner) to apologize. The fed-up father demands Nick propose within one month, thus setting up Season 7 to be a countdown: Nick won’t do it anytime soon (perhaps not until the finale), and the audience is still waiting for the next step in this long-troubled relationship to happen.

To be fair, Nick’s sincere assurance to Bob that he wants and plans to marry Jess is important. That brief monologue feels like a promise to the audience that this is going to happen, which is a kindness that could’ve been ignored in favor of more drama. Bob is a suitable stand-in for fans who are fed up with waiting out a relationship that’s not so much written in the stars, but repeatedly created, every day, as skywriting — it’s forced, even if it can sometimes seem sweet. Such a choice seems doubly annoying when noticing what really works in “About Three Years Later.” Brief cutaways and jokes about what happened in the interim are especially funny. Flashing back to Ruth’s first birthday with Winston giving CPR to a dying magician is sharp humor that’s surprising in how dark it gets. Then they doubled down on the bit by holding a memorial to the fallen magic man at her sparsely attended second birthday — a silly idea, but one in line with a historically silly show. And then there’s Schmidt’s mustache. Though it seems like his big ending arc will be about getting back to work, Schmidt’s one-off storyline about the new ‘stache worked really, really well.

It’s a simple move meant to trigger Nick’s irrational anger, and it’s the kind of dispute that has always worked well in “New Girl.” Schmidt wants Nick to acknowledge his feelings, and Nick really doesn’t want to do that. An offended, upset Schmidt is delightful and a grumpy, foolish Nick is equally funny.

But that’s the kind of bit that could’ve worked without the time jump. Schmidt grew his divisive facial hair when Nick was on a book tour, not while they were apart for three years. “New Girl” excels at goofy conflict like this, as evidenced in the next three episodes. There are other plot lines like Jess’ new job (so glad to see Dermot Mulroney as the face of Fox comedy in 2018) and the group getting kicked out of the loft (which, no matter how it happens, is a fitting end for a show that began with the new girl moving in). Cece and Schmidt obsess over preschool, and Nick needs help with his novel. Winston remains a total wild card, but his random plotlines are solid in the last year.

There’s much-needed time for tomfoolery before Nick and Jess are ultimately addressed, but one can only hope the little things add up to more than whatever grand romantic kicker is waiting in the wings.