The "La La Land" duo re-teams for a tribute to astronaut Neil Armstrong. 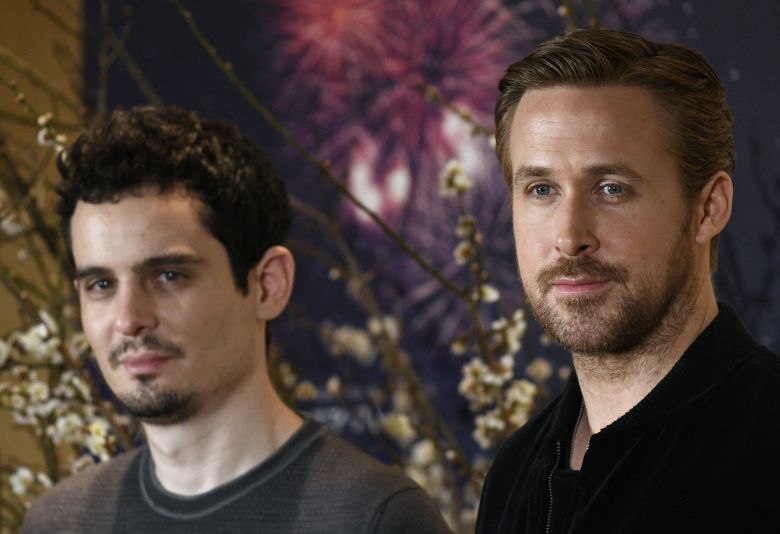 Ryan Gosling and his Oscar-winning “La La Land” director strode onstage at CinemaCon April 25 — to the tune of Elton John’s “Rocket Man” — to introduce the first trailer for their much-anticipated follow-up, astronaut biopic “First Man.” In the film, Gosling suits up as original moon-walker Neil Armstrong, who made history in July 1969. Accompanying the repeat collaborators was Claire Foy, the actress playing Armstrong’s second wife, Janet.

The footage, shown during Universal Pictures’ presentation at the convention, opens with Armstrong swaying his daughter as he sings her a lullaby and strokes her head. He exchanges intimate glances with Janet, and soon dances with her — their home life is a quiet, summer paradise, full of family dinners and kids leaping into pools. But Armstrong is also a loner tasked with a massive responsibility: saving America’s morale as the Russians dominate in the Space Race. Viewers see a flashback of him as a child, walking a street without friends; he later watches a launch deep in thought, surrounded by cheering co-workers.

Full of stoicism, Armstrong tells his son that he might not return from his upcoming mission as Apollo 11’s commander. At a press conference, he is forced to confront scores of skeptical reporters. Janet is wary of her husband’s light-year travels, scoffing to his boss (Kyle Chandler as NASA’s Chief of the Astronaut Office Deke Slayton), “You’re a bunch of boys, you don’t have anything under control.” Armstrong’s journeys above the earth had gone awry in the past: he almost died as a test pilot, and the trailer features an explosion, as he and his parachute land hard in a field. The couple also attends a funeral of a fallen colleague.

For the final shot of the first look, Chazelle gives Armstrong’s view as he looks down Apollo 11’s ladder, onto the moon’s surface for the first time. Audience members have to wait to see those iconic first steps.

Josh Singer, an Academy Award-winning screenwriter for “Spotlight,” adapted the film with Nicole Perlman (“Guardians of the Galaxy”) from author James R. Hansen’s “First Man: The Life of Neil A. Armstrong,” published in 2005. Universal will release “First Man” on October 12.

This Article is related to: Film and tagged CinemaCon, Damien Chazelle, First Man