The "Black Panther" star clearly had fun in Studio 8H. 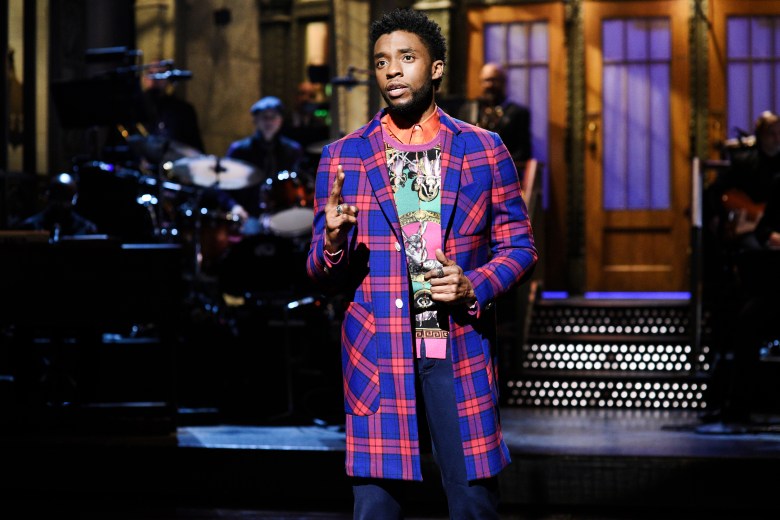 First of all: Boseman’s choice of ensemble for the monologue? Good God, the man knows how to dress. He also knows how to deliver a few solid jokes and dance, and it was good to see the writers take advantage of both elements.

It was also the closest that “SNL” got to taking advantage of Boseman’s status as America’s Preeminent Black Biopic Star, referencing his past work portraying not just the King of Wakanda, but historical figures like Jackie Robinson and James Brown. The episode in general was interesting in how it chose largely to use Boseman as a utility player rather than lean into his specific characteristics for sketches, which can usually go one of two ways: Create unique opportunities for weird-ass moments, or lead to a lot of straight-down-the-middle safe bets.

This week featured far more of the latter, with a fair number of sketches that felt like they could have featured anyone, but Boseman proved fairly game for anything, perhaps peaking with the “Magic Mirror” sketch.

It’s Boseman’s biggest moment of comedy weirdness, if only because “SNL” never fully admits that he’s actually R. Kelly (the character-from-“Mulan” bit is a perfectly weird bit of misdirection), and his commitment is truly impressive.

That said, the “Medical Breakthrough” sketch also makes great use of his talents as a straight man — Boseman is good at this whole comedy thing, and thank you, “SNL,” for giving us this glimpse at it.

This sketch falls into the category for so many women of “alarmingly relatable,” as long as you don’t get too caught up in the idea that women are being shamed for not working out? But it’s true, leggings are great no matter how you might choose to utilitize them, and the sketch is a great showcase for the female cast members who just want to relax (and why not?).

Honorable Mention: “The Game of Life”

While Melissa Villaseñor did a beautiful job of playing the frustrations any rational human being might experience when confronted with the Game of Life as experienced by Dreamers during this politically awful time, there’s a sense that it’s a bit that could have gone slightly further than it does. However, it’s easily the smartest and savviest political sketch of the night, showcasing some great work by the show’s production design team.

At this point, it’s not worth including the politically-themed cold opens for consideration here, because they seem to fall into the same category as the rest of the night and also usually don’t work in different ways.

Meanwhile, the energy of the night definitely flagged with “Warehouse Fire,” a one-joke bit with a ton of production value but no real purpose. Also, what was up with Boseman’s accent? It seemed to bounce between the Bronx and Wakanda at random, and he was born in South Carolina! For a first-timer, Boseman did a solid job as host, but this was easily his lowest moment of the episode.

“Black Panther” is a phenomenon to a degree where two months after its premiere, it’s hard to find fresh angles that haven’t been tried by everyone else. But “SNL” found two different approaches that worked.

“Black Jeopardy” is currently the most interesting of “SNL’s” existing established game show parodies, mostly because it uses its heightened depiction of black culture in America to serve in contrast to… something. In this case, it’s the nation of Wakanda from “Black Panther,” as represented by its king T’Challa. While a bit rocky at the start, this one ended strong, thanks to T’Challa’s comprehension of the complexities of potato salad.

In addition, the “Wakanda Forever” sketch took on cultural appropriation in an interesting way, just as we start seeing the Wakanda signature sign-off pop up more and more outside of the MCU — just a week ago, “Jesus Christ Superstar” star Brandon Victor Dixon offered up the double-fisted salute during the NBC live theatrical special’s curtain call. It wasn’t a brilliant sketch in terms of pacing, but it did feature some great lines, including this zinger directed all too fairly at white people: “We know your history — you don’t give stuff back.”

The show featured no shortage of good moments for its female cast, but while Kate McKinnon and Cecily Strong turned in their usual strong moments, Gardner managed to shine in a few key sequences, most especially her Weekend Update bit as Every Boxer’s Girlfriend Ever. She’s taking the kids to her sister’s!

Not really sure what was going on with this “Aidy B & Cardi B” sketch, except that Bryant committed.

“15 seasons,” the “SNL” veteran with the most seasons under his belt winked at the camera during the monologue, and the fact that he hasn’t gotten tired of dressing up like Panthro from “Thundercats” or wearing a weird wig for a weird-ass restaurant sketch must be appreciated. Towards the end of every season, rumors swirl that it’ll be Thompson’s last, but if he did depart, it would leave a vast hole to fill, especially since the younger performers are solid, but still have yet to establish the sort of legacy franchises that Thompson has.

Moffat’s approach to playing the Facebook co-founder stands out because Zuckerberg has been so often parodied, but this disconnected sociopathy played perfectly into the way Zuckerberg has been trying to evolve his public persona from “nerd” to “nerd you might one day elect to political office.” Will be interesting to see if Moffat has reason to whip this one out in future weeks/months/years.

There’s a bit of a feeling that we’re grading on a curve here: The cold open wasn’t as long and monotonous as it could have been! There were no sketches that were actively offensive! One actually wonders if Boseman’s comment during the monologue was more truthful than we realize — that having “Black Panther” co-star Sterling K. Brown appear on the show just a month ago got all of the bad ideas out of the “SNL” staff’s system.

That said, there have definitely been far more disappointing episodes, and hopefully the door is open for Boseman to return — because based on what we’ve seen so far, a second hosting appearance would offer up Boseman the opportunity to get even weirder. Sometimes that’s necessary. We didn’t get David S. Pumpkins until after Tom Hanks’ ninth appearance, after all, but Boseman definitely seems capable of that level of insanity.