As "Snoop Dogg Presents The Joker's Wild" returns, the hip-hop icon explains why it's now cool to be a game show host, and "diversifying your portfolio." 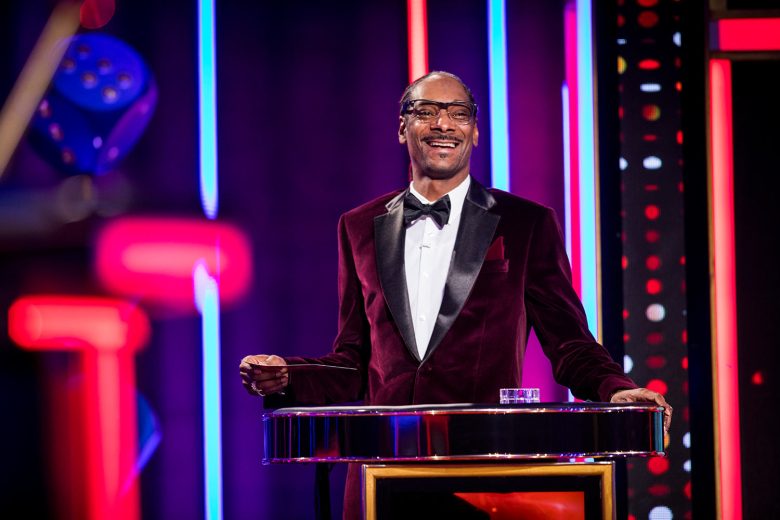 Snoop Dogg, late night talk show host? That could be the next evolution in the always-surprising career of the hip-hop icon, whose TBS game show “Snoop Dogg Presents The Joker’s Wild,” returns on Sunday for a second season.

“It’s the best job in the world to be a game show host, coming from being a rapper and a football coach,” Snoop recently told IndieWire. “This is a comfort zone for me.”

Of course, Snoop is no stranger to the hosting world, having landed an Emmy nomination last year in the outstanding reality host category, along with Martha Stewart, for “Martha & Snoop’s Potluck Dinner Party.” But now, Snoop said he’s also kicking around some ideas that might put him in the same arena as Stephen Colbert, Jimmy Fallon and his old buddy Jimmy Kimmel.

“There are people reaching out to me that like what they see and like what I’m doing,” he said. “We’re in conversations right now with some big networks that want to see Snoop Dogg on late night TV.”

But nothing’s set in stone yet: “I’m trying to assess it all and see if it makes sense. Because I do a lot of things that enable me to be who I am. [But] getting into that world I won’t be able to because I’d have to be exclusively locked down to that particular position. So I’m trying to see what makes the most sense for me and my career.”

“The Joker’s Wild” executive producer Michael Strahan said Snoop exhibits a kind of confidence that makes him a natural host. “Not everyone who’s great on the microphone or a great entertainer can host,” he said. “I think Snoop has a certain swag to him, the way he puts people at ease, that people want to be around him. He has this certain aura that he puts off that people want whatever vibe he’s giving off.

“From day one, he knew he could do this no matter how unorthodox it may have seemed in the beginning,” Strahan added. “And he has proven everybody who said he couldn’t do it wrong. And everybody who believed in him right. If you’re going to commit to something you better believe that you can do it. There’s nobody who believes in himself more than Snoop.”

For Season 2 of “Joker’s Wild,” Snoop is handling the show by himself, without a co-host (which he had in Season 1). Instead, the game show — a revamped reboot of the 1970s staple — focused on bringing in more guest stars to participate in questions. Among this season’s cameos: Ice Cube, RuPaul, Wiz Khalifa, Kevin Smith, Aubrey Plaza, Paris Jackson, Hannibal Buress, Busy Philipps, Adam Devine, Bill Nye, Xzibit, Biz Markie, G-Eazy, Cheech and Chong, Julian Edelman, Dana White, Antonio Brown and Matthew McConaughey.

“That’s a challenge because you have to carry a show and no doubt in our mind that Snoop can carry it,” Strahan said. “But he blew everyone away with how he performed in Season 2. He absolutely crushed it.” Below, IndieWire spoke to Snoop about how it has become cool to be a game show host, why so many hip-hop stars have gravitated to the job, and whether he’d ever host the Oscars.

It used to be cheesy to be a game show host, but how has that changed?

What they’re doing is they’re finding fly, cool hosts and then they’re putting a little twist on the shows to give it an upgrade. For example, when you look at Family Feud, Richard Dawson was a great host. He was phenomenal.

And he managed to somehow kiss every contestant.

Nowadays he’d have a hundred cases against him right now. The #MeToo society would be on his ass!

But passing the baton to Steve Harvey, he’s doing an exceptional job. Who would have thought? But Steve’s a comedian, he’s used to working a crowd, he’s used to holding a microphone in front of a lot of people. That’s why the game shows and the game show hosts are becoming fly and relevant and hip. And they dress proper and they look good and know how to talk. You watch the shows because you love the contestants but at the same time you love the show, and then you love the host.

Beyond the game play, it’s so much now about the host interacting with the contestants.

Well, my show is basically that. “Snoop Dogg Presents The Joker’s Wild.” Most of the categories are Snoop-ified and we put my flavor on it. We try to make it as fun as possible. But it’s a Snoop-based show. So when you’re watching you know it’s Snoop influenced all the way through.

You’re hosting a show, Method Man has a show, LL Cool J hosts a show, and there are others. What is it about MCs who have become game show hosts or hosts in general? Is it about that microphone?

I believe that, because “M.C.” stands for “Master of Ceremonies,” or “Microphone Controller.” And one thing about us in rap, the crowd is the hardest thing for us to control. Once you maintain control of the audience in the rap community, doing something like this, this is a cakewalk. There isn’t stress connected to it. Rap audiences expect you to be great, and you’ve got to be flawless, you’ve got to be on point. On this, you can mess up, do it over again, reshoot. We do pick ups, but I’m good, I don’t need a lot of pick ups. But just in case you mess up, you can do a pick up. In the rap world, you don’t get any pick ups. You mess up, you get booed.

That’s a different kind of timing we have as rappers that’s an advantage we have as game show hosts. Our timing and ability to be witty and fast, and ability to freestyle and ad-lib. That’s a true advantage, especially on a game show where you don’t know what kind of contestants you’re dealing with, you don’t know what is going to happen. You have to be fast and on point. That’s why we’re getting these great jobs.

What’s the reaction in the hip-hop community to all your hosting gigs, including this and the show with Martha Stewart?

Everybody is clapping, standing at attention, wanting to be a part of it. We have celebrities all over this show working on categories and all sorts of things. They all came in here willingly and ready to perform and did funny shit, and all sorts of things that I didn’t expect. And when I did the Martha and Snoop show, we get any celebrity we want to come on and cook and have a good time. The reach that we have is incredible because it’s kinda hard saying no to Snoop Dogg.

Are you surprised at how mainstream that hip-hop has become? 50 Cent is a TV producer!

Quite a few people have emerged from hip-hop and become moguls by tackling so much beyond rap.

We call that diversifying your portfolio. That’s what we call it in the rap world.

Do you think it’s time to be enshrined in the Rock and Roll Hall of Fame. You’ve got to have been active for 25 years.

That’s this year. My first album came out 25 years ago this year. But I don’t do it for accolades. I don’t watch my highlights. I’m too busy making my next play. I ain’t got time to sit back and watch “Sportscenter” and see what I did.

What’s the most important thing you learned in hosting a TV show?

Control. To always maintain control and take your time. We rush sometimes as rappers. But in the game show world you can take your time and walk. That’s what I’m learning to do to be more precise. The more patient I am the better I am.

And now with Season 2 premiering, you’re up there by yourself. No more co-host.

I can handle it. I’ve been doing this type of thing for a long time. I’m just happy they gave us a Season 2, that it was worthy of more episodes. Season 1 we did ten episodes, Season 2 we’re doing 20 episodes. I must have done something right.

I don’t know about hosting the Oscars, not enough motherfuckers like me be winning. But what else would I like to host? The AVNs [adult video awards]!

This Article is related to: Television and tagged Jokers Wild, Snoop Dogg, TBS