When you check the timelines, it becomes clear that "Trek" will have to find a way to feature a new take on our favorite half-Vulcan. 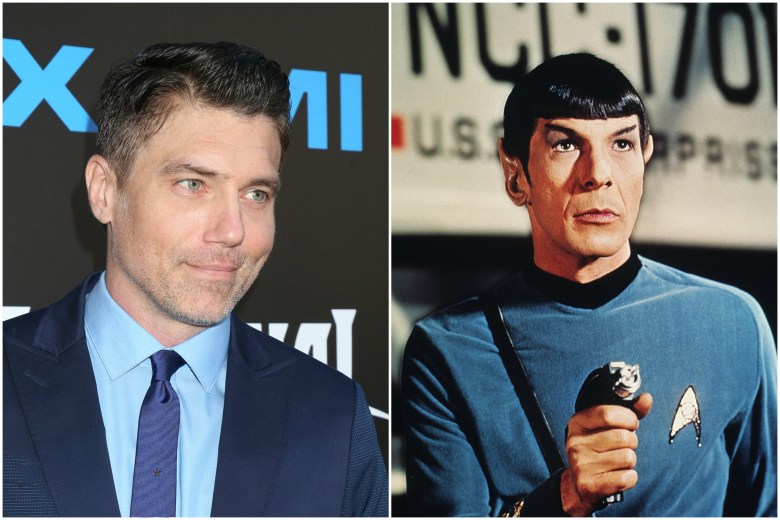 It’s official: Season 2 of “Star Trek: Discovery” will feature the captain of the Enterprise — no, not Kirk, but the one before him. Anson Mount (“Hell on Wheels,” “Marvel’s Inhumans”) is joining the cast of the CBS All Access series as Captain Christopher Pike. It’s more than just casting news — it’s news that has us dying to find out what’s going on with that half-Vulcan who’s also on board the Enterprise at this time.

Pike’s casting is news we’ve been expecting since the Season 1 finale of “Discovery,” which featured the good ship Discovery encountering the Starfleet flagship and teased Pike’s presence. Executive producers Gretchen Berg and Aaron Harberts have been clear since the end of the season about having to handle “Discovery’s” temporal placement, as the show exists within a period of “Star Trek” history that now overlaps with established continuity.

“We’re always hyper-aware of it, right?” Berg recently told IndieWire. “We’re thinking about it, because you can’t contradict anything that’s happened and if you do, you better have a really good way to clean it up.”

According to Harberts, “Star Trek: Discovery” begins in the year 2256, and by his math the events of the season (including the war between the Federation and the Klingons) lasted between 18 months to two years. Thus, Season 1 ends in approximately 2258. This is seven years before “Where No Man Has Gone Before,” the first episode of “Star Trek: The Original Series” featuring Captain Kirk. Thus, at this point, the Enterprise is still being captained by his predecessor.

Pike is an established part of “Trek” canon in both the original timeline and J.J. Abrams’ alternate universe — Mount will be the fourth actor to play the character, following Jeffrey Hunter and Sean Kenney in the original series and Bruce Greenwood in 2009’s “Star Trek” and “Star Trek Into Darkness.”

Pike was creator Gene Roddenberry’s original concept for the captain of the Enterprise, played by Hunter in the original filmed pilot. After that version of the first episode was rejected by NBC, Roddenberry went a different direction with William Shatner as Captain Kirk. What we know about Pike as a character in this timeline, within the official context of “Star Trek” on television, comes courtesy of “The Menagerie,” the two-part “TOS” episode which (for production reasons) reused footage from the rejected pilot to tell a nested story about one of the Enterprise’s pre-Kirk adventures.

Berg described Pike as a self-sacrificing, “valiant character who clearly forged quite a bond with a certain Vulcan we know.” So this is what matters: Pike is also the former commanding officer of one Lieutenant Spock (Leonard Nimoy), who says in “The Menagerie” that he served under Pike for 11 years. Given that Pike captained the Enterprise from at least 2254 (when the flashbacks in “The Menagerie” take place) to 2264 (when Kirk assumed command of the Enterprise), there’s very little doubt that in the year 2258, Spock is on board that ship. Jeffrey Hunter and Sean Kenney, who played Pike in “Star Trek’s” “The Menagerie.”

Spock of course has been a presence on “Discovery” since the beginning, as it was revealed in the pilot that he and Michael Burnham (Sonequa Martin-Green) were raised together by Sarek and Amanda Grayson following the death of Burnham’s biological parents. According to available data online, Burnham was born in 2226, while Spock was born in 2230, meaning they’re four years apart in age — in 2258, Spock would be 28 years old, while Burnham is 32.

So far, “Discovery” has acknowledged the existence of Spock but avoided ever showing him on screen. It worked in Season 1, since he was serving on the Enterprise at that time, and all of Burnham’s family interactions focused on her adopted parents. But with the two ships meeting like this in the “Discovery” finale, and Pike’s casting confirmed, it’s impossible to imagine how the show might dodge a family reunion without some extreme effort.

While this might seem like an inevitability, it does come with its own share of stresses. In the “Trek” universe, Pike is an important but somewhat obscure character. Spock, meanwhile, is perhaps the franchise’s most iconic figure. However difficult it might have been to cast Pike, Spock presents a far greater challenge (especially with memories of Zachary Quinto’s own version of “young Spock” still very fresh in viewers’ minds). It’s a task we don’t envy the “Discovery” producers taking on.

Of course, there’s no official confirmation that Spock will appear in “Discovery” Season 2. But as we tried to make clear above, it’s only logical that he does.

“Star Trek: Discovery” will return to CBS All Access in 2018.

This Article is related to: Television and tagged Anson Mount, CBS All Access, Star Trek Discovery