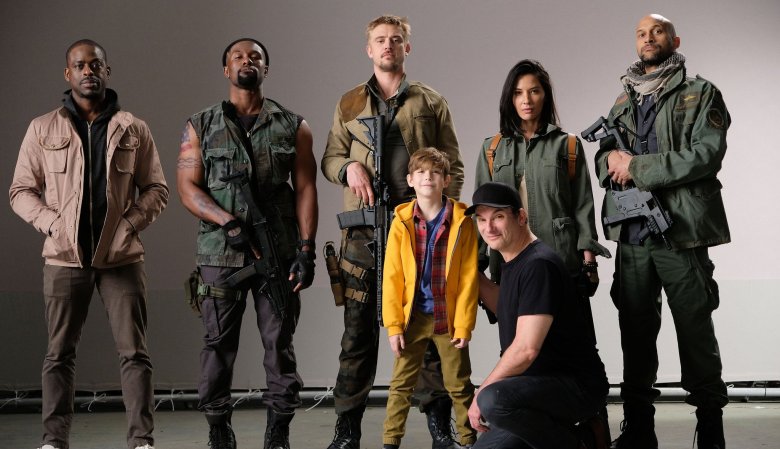 20th Century Fox has being keeping Shane Black’s “The Predator” under lock and key. For a studio tentpole and franchise sequel that’s set for release in almost four months, it’s a bit unusual and extremely enticing that the studio has yet to make any footage or movie stills available to the public. Fortunately, Fox pulled back the curtain on “The Predator” during its CinemaCon presentation.

“The Predator” is set in between 1990’s “Predator 2” and 2010’s “Predators.” The alien creatures have managed to upgrade themselves with the DNA from other species, making them stronger, smarter, and deadlier than predators we’ve seen before. The story kicks in when a young boy (Jacob Tremblay) accidentally triggers the predators return to Earth. A ragtag crew of soldiers and scientists, played by Boyd Holbrook, Olivia Munn, Sterling K. Brown, Keegan-Michael Key, and Trevante Rhodes, are tasked with saving the human race.

The presentation included the first trailer for the film, which press called “badass” and full of “blood and guns.” The footage begins with Tremblay’s young boy on Halloween playing with a toy box that has a toy alien ship inside of it. It turns out the toy is controlling a real alien spaceship, similar to the way Anne Hathaway controlled a monster in “Colossal.” The vessel ends up crash landing on Earth and releasing tons of Predators.

The trailer cuts to an interrogation room featuring Boyd Holbrook, who is playing a military sniper. It turns out Holbrook is the father of the boy we saw earlier. Footage of soldiers battling Predators and a Predator violently holding one by the neck cut through Holbrook’s integration narration. Olivia Munn’s scientist makes a big impression during the trailer. Her character is seen expertly handling a gun. When Sterling K. Brown’s character asks, “You’re pretty handy with a gun, where’d you learn?” Munn replies: “America.”

“The Predator” opens nationwide September 14. Check out first reactions to the footage below.

We just saw a pretty badass first trailer for #ThePredator. It begins at Halloween with a little boy opening a box that has a toy alien ship. As he plays with it, he is actually controlling a real alien ship, crashing it on Earth#CinemaCon

Predator trailer slowly ramps up the action, detailing how the creature is evolving, featuring multiple scenes of battling Predator. Olivia Munn stood out as the one getting in on the most action. In theaters 9/14

And looks like Shane Black has another winner on his hands with THE PREDATOR, whose trailer includes very funny opening scene with Jacob Tremblay before moving into familiar paramilitary territory, and Weyland-Yutani-like corporate-science shenanigans. #CinemaCon pic.twitter.com/fImc3yoioM

Shane Black and Fred Dekker’s character work was on full display already. There was a cool shot of the Predator laser dots on @JacobTremblay. Olivia Munn sees this, pushes him behind her and dots move to her.

This Article is related to: Film and tagged Shane Black, The Predator