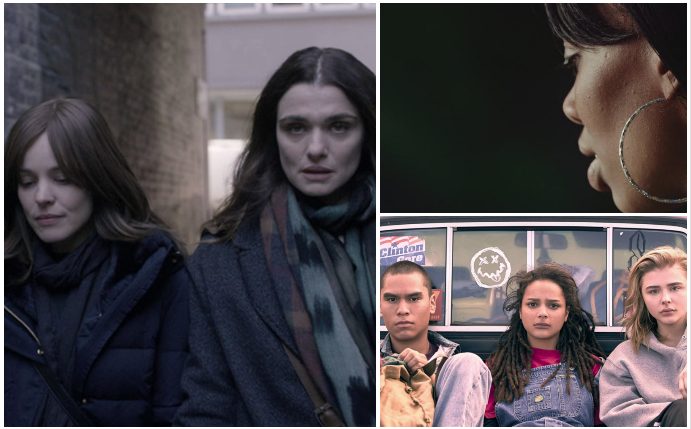 When the 17th annual Tribeca Film Festival opens this week, New York audiences will have a chance to catch some of the most anticipated queer films of the year. Sebastián Lelio’s “Disobedience” will play in New York days before its theatrical release; the film stars Rachel Weisz and Rachel McAdams as two women who must hide their attraction in their tight-knit Orthodox Jewish community. Desiree Akhavan’s Sundance winner “The Miseducation of Cameron Post” will also make its New York debut at the festival, with Chloë Grace Moretz and Sasha Lane. Provocateurs Andre Leon Talley and Robert Mapplethorpe each headline their own film, and prolific gay filmmaker Matt Tyrnauer uncovers the inside story of Studio 54. Sebastián Lelio concludes his sumptuous triptych of films about women with “Disobedience,” the Chilean filmmaker’s first English-language film. Hot on the heels of his landmark Oscar win for transgender film “A Fantastic Woman,” Lelio manages to outdo himself yet again. Based on the eponymous novel by Naomi Alderman, the film begins with Ronit (Rachel Weisz) as she returns to her Orthodox Jewish community in London after learning of her father’s death. When she is cautiously welcomed by her childhood best friend Dovid (Alessandro Nivola) and his wife Esti (Rachel McAdams), her presence makes waves in the tight-knit community and awakens latent desires for both women.

Lelio presents the religious traditions with no hand-holding, dropping the audience down into the insular world as Ronit revisits her old life. Ever so subtly, he shifts focus from Ronit to Esti, and then to Dovid, traveling to unexpected places both nuanced and intensely passionate. The film is beautifully shot, somehow finding vividness in London’s grey-blues and the varnished wood of synagogue interiors. With three knockout performances and the slow burn of long-dormant passions, get ready to savor “Disobedience” like the light of the Sabbath candles. “Appropriate Behavior” directer Desiree Akhavan returns with a drama about gay conversion therapy, which won the U.S. Dramatic Grand Jury Prize at this year’s Sundance Film Festival. The film stars Chloë Grace Moretz as the titular character, a teenager who is sent to the controversial program after she is caught making out with a girl on prom night. Once there, she must contend with the strict leaders of the camp, Dr. Lydia Marsh (Ehle) and her brother Reverend Rick (Gallagher Jr.), while also befriending fellow patients Jane (Sasha Lane) and Adam (Forrest Goodluck). An out bisexual, Akhavan has often spoken about the importance of making films that reflect her experience. In his positive review out of Sundance, IndieWire’s David Ehrlich called it “a humble, poignant, and extremely touching coming-of-age drama that unfolds like a seriocomic ‘One Flew Over the Cuckoo’s Nest’ set at a gay conversion camp for Christian teens circa 1993.” Alia Shawkat (“Search Party”) and Laia Costa (“Victoria”) play two women who engage in a sex experiment in this dramedy from “Beatriz at Dinner” director Miguel Arteta and produced by the Duplass brothers. Shawkat co-wrote the script with Arteta and took on the lead role — originally written for a man — when they couldn’t find the right fit. As the tomboyish Naima, she plays an aspiring actor who loses a plum gig on a Duplass brothers project. Reeling from her setback, she meets the whimsical and manic Sergio (Costa), who after one night together suggests they make love every hour for 24 hours as an experiment in intimacy. There are virtually no men in the film, aside from early cameos by the brothers Duplass and Kumail Nanjiani; and too-brief appearances from Kate Berlant, Hong Chau, and Mae Whitman offer a comedic reprieve from the intense central romance. Former Vanity Fair writer Matt Tyrnauer continues his prolific career with a look at the tumultuous history of New York’s most fabled night club, the 1970s disco Studio 54. The out gay filmmaker has steadily built an ouevre of documentaries that shed new light on important chapters in gay history; from the closeted stars of old Hollywood, savior of Greenwich Village Jane Jacobs, and iconic fashion designer Valentino Garavani. Sundance reviews praised “Studio 54” for limiting celebrity testimony in favor of interviews with owner Ian Schrager and bouncer Marc Benecke, gatekeeper of the infamous velvet rope. “Studio 54” covers the club’s short but unforgettable four-year run, the social climate that led to its meteoric rise, and the reasons behind its sudden closure. Director PJ Raval follows investigative journalist Meredith Talusan as she reports on the brutal murder of a transgender Filipina woman in 2014. The primary suspect was a U.S. Marine, which prompted protests and shed light on pervasive transphobia and post-colonial tensions between the U.S. and the Philippines. An accomplished cinematographer before transitioning to directing, Raval lensed the 2008 Oscar-nominated documentary “Trouble the Water.” Raval’s first feature, “Trinidad,” followed pioneering gender confirmation surgeon Dr. Marci Bowers, a good sign that the sensitive material is in good hands. It’s a Tribeca Film Festival premiere. Taking its name from the slang term for leaving a pimp, this riveting documentary takes us inside the country’s first sex-trafficking court. The Queens, New York courtroom is presided over by the Honorable Toko Serita, who approaches her mission to clear women of prostitution charges with a stern benevolence. She is aided by the tenacious Eliza Hook, a sharp and vivacious social worker, and a prosecutor sympathetic to the challenges faced by undocumented and low-income women that leads them to the sex trade. Forgoing title cards and introductory text, Wang-Breal focuses on the daily goings on of the courtroom, imbuing her film with verité immediacy. With the recent legislation of FOSTA-SESTA in the news, “Blowin’ Up” offers an artful take on timely issue that has been misunderstood for far too long.

Also of note: “McQueen,” “The Gospel According to Andre,” “Mapplethorpe.”

This Article is related to: Film and tagged Disobedience, LGBT, Tribeca