Jonathan Nolan and Lisa Joy teased fans on Monday that they might reveal the entire plot to Season 2 and stop rampant online theories. If true, that could cause more headaches than just spoilers. 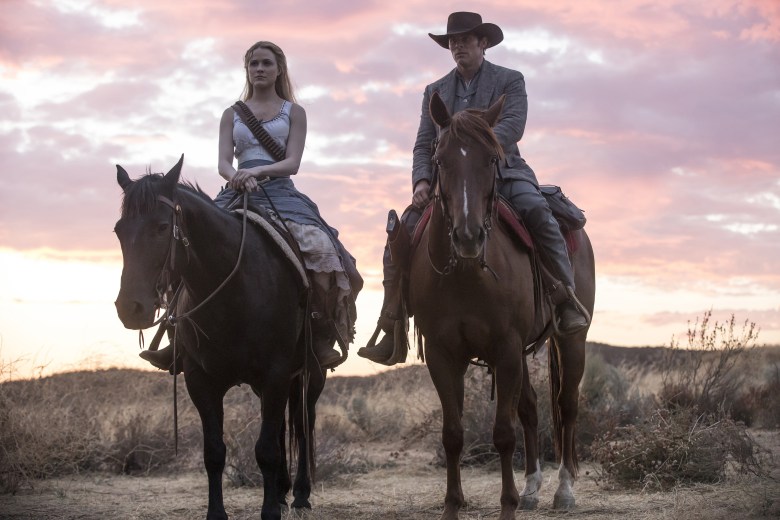 UPDATE: Yep, it was a joke — and read on for all the reasons why it would have been a terrible idea.

The explosive Season 1 finale of “Westworld,” which aired all the way back in 2016, shocked fans by more or less burning the show down to start anew. At the end of the episode — and yes, this is a spoiler alert, but it’s been 17 months already! — Dr. Ford (Anthony Hopkins) reveals the park’s “new narrative”: Dolores (Evan Rachel Wood) and her fellow bots become killing machines, essentially destroying Westworld as we know it.

Now, showrunners Jonathan Nolan and Lisa Joy are potentially doing the same thing: Introducing a new narrative for how viewers watch “Westworld.” In a Reddit post on Monday, Nolan and Joy suggested that they had grown tired of viewers confusing theories for spoilers — especially when theories are correct, which actually makes them spoilers.

Admittedly, that is exhausting. But there’s an easy way to avoid that: Don’t read the theories/spoilers. Nonetheless, Nolan and Joy have decided —if enough Reddit users agree via 1,000 “upvotes” — to post a video “that lays out the plot (and twists and turns) of season 2. Everything. The whole sordid thing. Up front.”

The idea, they wrote, was to give the fans who want to be spoiled what they crave, while also protecting everyone else, particularly by distinguishing between what’s “theory” and what’s “spoiler.” So in this new scenario, there will be no such thing as pure theories or spoilers. The online trolls who seek to ruin the show for others may have just been neutralized. But in creating a new reality for the way we consume “Westworld,” have they set into motion the show’s ultimate destruction?

“This is an initiative from the ‘Westworld’ showrunners,” HBO said in a statement. “We suggest you stay tuned to Reddit for their next move.” So there could very well be method to this madness. But just on face value (which is all we can go with at the moment), this plan doesn’t seem all that beneficial for the channel. First off, Nolan and Joy imply that they’ll post this video on Reddit — which means anyone and everyone will be able to watch it. Why not at least offer it exclusively to HBO subscribers? Instead, immediately sharing the scoop with everyone gives people less reason to fork over their cash for their HBO cable subscription, or for HBO Now.

Ironically, in this age of too much TV, there are probably many fans of the show that might be satisfied with watching the recap video to stay up to speed with the show and remain in the conversation. “Westworld” could remain in their TV queue, but there would be less reason to watch the show immediately, or on a week-to-week basis. Ratings don’t mean as much to HBO as they do to an ad-supported service, but the world still sees those numbers — and they do have an impact on the channel, and also on producer Warner Bros. TV.

That’s the business reason for not spilling the beans. But what about viewers who watch “Westworld” specifically for the puzzle of it all? Having the truth laid bare takes away a lot of the fun of deciphering the show, even for viewers who religiously avoid the spoilers. Once you know the truth is out there, and that a percentage of fans already know the details, the fun of guessing what’s going to happen next is still taken away. Why share your theories on social media, if others can immediately tell you if you’re right or wrong? Because no one wants to be the chump who gets it completely wrong.

Not only does that take away the fun, but it also takes away word of mouth on the show. If no one dares share their theories on Twitter or other social outlets anymore, “Westworld” might lose some of that buzz. For a show that’s been off the grid for 17 months — and is on the hunt for Emmys — it needs all the chatter it can get. For the writers and reporters who cover television, a few more questions, starting with the obvious one: Will critics, as a result, be given the entire season early enough to craft thoughtful takes on the direction of “Westworld” Season 2? Otherwise, this decision makes even less sense. Up until today’s surprise Reddit post, “Westworld” and HBO have continued to be coy with even the media about spoilers, and what may or may not be in Season 2. And the show premieres later this month.

“If the Westworld creators are serious about this and not joking/marketing… this is pretty nuts,” wrote Uproxx critic Alan Sepinwall. “And will make message boards and comment threads unreadable for those who haven’t seen the spoilers. Though if this is Nolan and Joy acknowledging that S1 depended too much on puzzle box storytelling, and that S2 isn’t built largely around big surprises that the audience is going to figure out with or without the showrunners publishing spoilers themselves, that’d be promising.”

New York Times TV critic James Poniewozik suggested that “All creators of all shows should rip the Band-Aid off and spoil the entire thing up front, so everyone else can stop agonizing about it,” but then added, “Having said that, judging by the first season I’m not sure Westworld is a show that benefits from people not spending all their time speculating on plot twists.”

This being “Westworld,” it remains to be seen what kind of fun Nolan and Joy might be having with fans — or if this is another classic misdirection, in the vein of the entire series.

As Jeffrey Wright (a.k.a. Bernard) wrote to Nolan and Joy on Reddit, “Are you two human, AI, or AI evolved to deny it?”