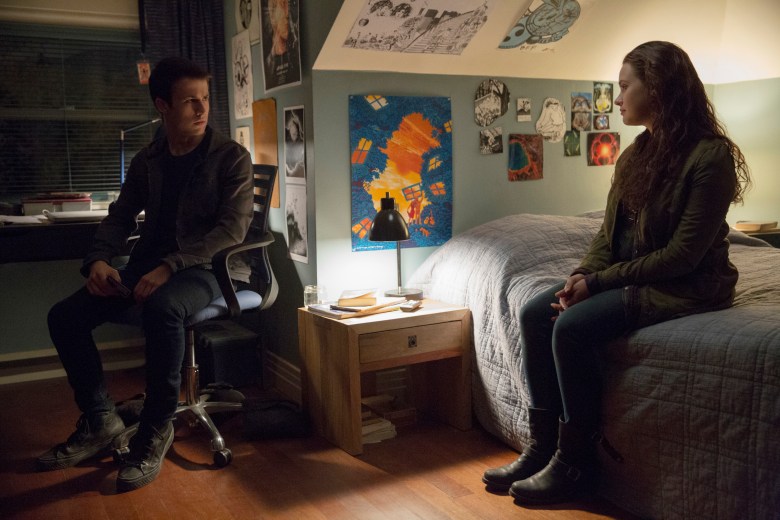 “13 Reasons Why” is not a show that shies away from controversial material. The Netflix drama reaches people on a deeply personal level, and that includes executive producer Joy Gorman Wettels, who audibly sniffled when IndieWire brought up a scene from the Season 2 finale.

“Don’t worry about it,” Gorman Wettels said, after an apology. “I mean, it’s an emotional show. It’s really emotional. It ain’t a comedy, you know what I’m saying? But if we didn’t have this level of investment in what we’re doing, you would see it on the screen.”

“13 Reasons Why” chronicles the aftermath of teenage Hannah Baker’s (Katherine Langford) suicide in her small town, and, as Wettels said, it’s most definitely not played for laughs. Wettels was involved in the development of the series since before it arrived at Netflix, bringing in showrunner Brian Yorkey (who she’d known since the two of them attended college at Columbia University) to help adapt Jay Asher’s novel.

“I think Brian has made something that’s just kind of super-brave and forces us to look at things that kids are really going through or what we went through,” she said. “And we didn’t have the tools or content to bridge that gap of conversation. And it’s really thrilling to be a part of it.”

While the first season essentially covered the story told by the book, Wettels said that the decision to extend the series beyond a single season came from the characters. “These kids that our writers created, these fleshed out, three-dimensional, deeply flawed, deeply feeling kids… It was only just the beginning of growth in their life. This whole community had just gone through the worst possible trauma they ever could have imagined.” As she noted, “Jessica only takes the step at the end of the season to say, ‘Daddy, something happened to me.’ That is just step one in even beginning to heal from rape. Justin Foley has made the most terrible, unforgivable mistake of his life. He feels like he could have saved his girlfriend’s life and he couldn’t. He is kind of living on this short leash with Bryce, and needs Bryce to survive, and makes this brave decision to just leave and get Bryce out of his life. You’re dying to know what’s going to happen to that kid, I think, at the end.”

“To me, I kind of felt like, how do you not continue to tell the story?” she said. “You really want to watch these kids try to heal and recover from the most tremendous trauma… I can’t imagine how you don’t have a Season 2 and follow the lives of these people because this community is forever changed by Hannah’s death. And to me it’s like these kids were all so broken by it. Some deservingly so and some not. It wasn’t so black and white. And I think you really had to give them a chance to tell their side of the story.”

When Season 1 premiered, there was no shortage of controversy around how the show handled its darkest moments, and since then the “13 Reasons Why” team has worked hard to develop tools that create conversations about the topics it explores, including education on things as basic as appropriate terminology.

“I really try my hardest to never use the word ‘commit’ because it sounds like a crime,” Gorman Wettels said. “I use the term ‘died by suicide.’ We were learning those tools from all of our mental health experts. And it’s the same thing with using the right terms around rape and really, really trying to refer to sufferers of rape as survivors.”

“We got to go to the American Foundation for Suicide Prevention Gala,” she said. “And to feel how much that’s turned around since the controversy and to be in a room with the people who are really making the difference, and changing lives, and having them say thank you and be our real partner is just such an exciting honor. So it feels like it’s working.”

In fact, a recent Northwestern University study shows that “13 Reasons Why” has had an impact on the way the conversation surrounding suicide and other difficult topics has shifted: Of the 5,000-plus teen viewers surveyed, 58 percent reported talking to their parents about the show and issues after watching, and 51 percent also said that after watching, “they apologized to someone for how they’d treated them.” The future of “13 Reasons Why” is unknown as yet — there’s been no greenlight for a third season. But given how Season 2 ends, is there potential for the show to continue? Wettels couldn’t offer any specifics, but did say that “I really think that there’s still story to tell.”

When asked for more detail, Wettels said, “I think it’s similar to my answer about Season 1. These kids are still healing. This community still has a lot of places to go, emotionally. And I want to see these characters get further in their recovery.”

What that means for any future characters isn’t clear. For example, at the end of Season 2, Olivia (Kate Walsh) discusses moving to New York and living out one of her daughter’s unfulfilled dreams. Is a happy ending for Olivia, on some level, actually possible?

“I certainly hope so. I think that as dark as the show is, we really just try to … We try to be hopeful, but not shy away from what a rocky, complicated road it is to heal from trauma,” she said. “I think we all want to see Olivia able to move on and have some semblance of happiness, while still honoring the unimaginable truth that is living with this kind of loss. I mean, we talked to a lot of parents who’ve been through it. And we really just tried to show an authentic version of what it is. I think maybe seeing how hard it is to heal could be a helpful part of the conversation of why it’s absolutely the worst thing you could ever do.”

“13 Reasons Why” Season 2 is streaming now on Netflix.

This Article is related to: Television and tagged 13 Reasons Why, Netflix, TV Interviews