In Episode 11, Earn finally takes his shot to prove that he has what it takes to provide for his family. 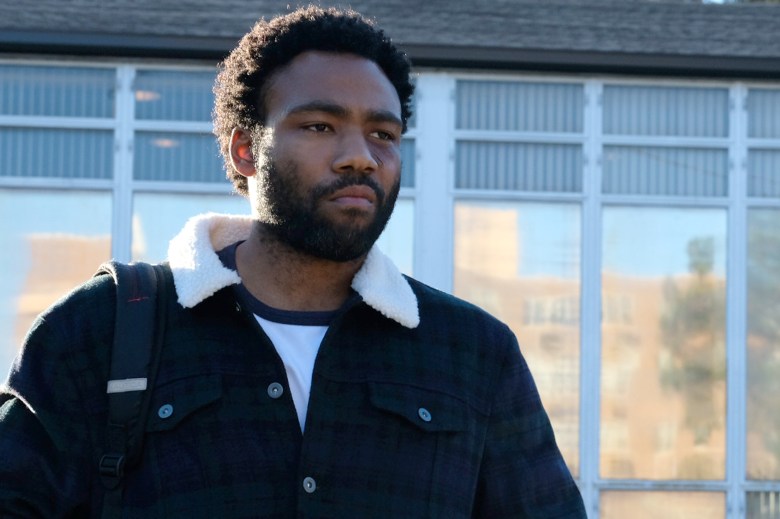 “Atlanta” closed its finale with a bang, but not the literal one that many viewers and been braced for since the season began with a barrage of gunfire, a vibe that then continued with ongoing depictions of danger and violence. Instead, the episode placed Earn (Donald Glover) in a situation where he had any number of options, but he chose the one that would take someone else down and in the process damn himself as well. It was cold, it was calculated, and it was a decision that was a whole season in the making because of the threat of brutality and failure that is ever-present in Earn’s life.

In Episode 11, Earn runs around town trying to finish everything before catching a plane so that his cousin Alfred, aka Paper Boi (Brian Tyree Henry), can go on a European tour with Clark County (RJ Walker).  Why Earn waited until that day to make sure that Darius’ (Lakeith Stanfield) passport was still valid (nope) and for movers to come isn’t clear, but as the passport expediter observed, “Rappers are procrastinators. No offense.”

Each of his appointments reminds Earn of how he’s failing in life on all fronts: The entertainment lawyer they consider doesn’t meet Alfred’s expectations for high-profile clientele or Jewishness, the movers won’t respect Earn’s authority until he bribes them, and his daughter Lottie (Mia Atehortua) needs both tuition for a better school and more of his presence as a father. With the threat of Alfred firing him once they get to Europe — since that would allow Earn to at least see the world a bit first — it looks like Earn is on the brink of losing everything.

But then there’s a callback to the premiere when Earn had gotten a distinctive gold gun from his Uncle Willie (Katt Williams). That gun is still at Alfred’s house and as they’re scrambling to pack, he doesn’t want it around. Earn puts it in his backpack to take care of later, but of course, he doesn’t remember until they’re going through security at the airport. He makes a split-second decision and slips it in Clark County’s bin, proceeds through the line without incident, and then boards the plane. As they’re about to take off, it’s revealed that Clark County let his manager Lucas (Matthew Barnes) take the fall for him. The episode’s title “Crabs in a Barrel” should’ve been the first clue that someone was going to do something cutthroat. The phrase, also known as “crab mentality” or “crabs in a bucket,” refers to how when one crab will try to climb out of a container to freedom, another will actually pull it back down, thus dooming all of them to a fate as crab cakes or being served alongside melted butter.

The human equivalent, in this case, is halting the success of another person out of feelings of spite, anger, jealousy… or for Earn, self-preservation. It’s not an action that would’ve fit the Earn that we thought we knew, but it’s the Earn he’s become. Last week’s penultimate episode with the fake FUBU shirt not only established the cousins’ lifelong bond, but parallels Earn’s airport situation in that if he’s found out, he could get in trouble. As in middle school, Earn has proven that he’ll do what’s necessary to survive when placed in a precarious situation, and let another person be penalized for his mistake. And in Atlanta, Earn’s life is precarious. He just needed the threat of hitting rock bottom to be reminded.

Through Earn and Alfred, the show has examined what it means to be a black man trying to make it in the Atlanta music biz: Both have learned that clothes are important to their perception and success. And after Alfred was mugged and had his epiphany in the forest, he decided to embrace what it takes to project that rapper image, including using social media.

But Earn has still been struggling with the realities of life, including racism, that plague him on a daily basis. In “Crabs in a Barrel,” Van (Zazie Beetz), the mother of his child, points out that he had chosen to go to Princeton, where it’s mainly white students. Even the Jewish guy at the passport place has to spell it out when he apologetically acknowledges that Jewish lawyers have better contacts than black lawyers “for systemic reasons.” Everyone else seems to accept and work with the situation, except Earn. It’s this denial of who he is and how the world sees him that has created this disconnect. But it all comes to a head when Earn is faced with the overwhelming evidence of how he’s coming up short. The season’s subtitle “Robbin’ Season” may refer to that dangerous time of year when people go on robbing sprees in order to get Christmas gifts for their families, but it’s more than just taking things away from others. It boils down to stealing from another in order to provide for one’s family. The schooling situation with Lottie, and later hearing that Alfred feels responsible for providing for him, are both rude awakenings for Earn. He’s had his trial period trying to figure out how to be a manager to a rapper, but that time has expired.

Darius, the show’s stealth sage, notes, “Learning requires failure. Al is just trying to make sure you’re not failing in his life. Y’all both black, so I mean, y’all both can’t afford to fail.” Alfred already made his choice in that he was prepared to fire Earn. Clark County, the season’s second-scariest figure after Teddy Perkins, has made this decision at least twice this season (getting rid of the engineer at the recording studio and throwing Lucas under the bus). Unknowingly, Uncle Willie had handed Earn the tool with which he would make his choice.

When Willie had initially gifted the gun, he said, “You’re gonna need this in the music business.” It’s a chilling yet offhand comment that could have multiple meanings: the gun could come in handy for killing, for self-defense, to create intimidation, to keep up appearances, or to build confidence. Earn used it in a way that fit him. It’s been reiterated that he’s smart, and so instead of violence, he knows that he can use the gun in a different, career-damaging way. In middle school, he let Alfred get him out of the FUBU situation. This time, he saves himself. Earn toughens up his crustacean carapace and does what he has to do.

On the plane, Alfred reveals that he witnessed what Earn did and approves.

“[N-word] do not care about us man. [N-word] going to do what they gotta do to survive. They ain’t got no choice; we got no choice neither,” he says. “You my family, Earn. You the only one who knows what I’m about. You give a fuck. I need that. Alright?”

With a nod, Earn acknowledges that he will do what else is necessary to guarantee their continued success. He may have lost his idealism, but he put the “man” in manager and provided for his family during Robbin’ Season. Similarly, in its second run, “Atlanta” has told a more cohesive and sophisticated story than in its freshman run. Like Earn, it’s matured and has taken control.

This Article is related to: Television and tagged Atlanta, FX, TV Reviews