From cheerleaders who fight vampires to men who morph into animals, these concepts just shouldn't have worked. 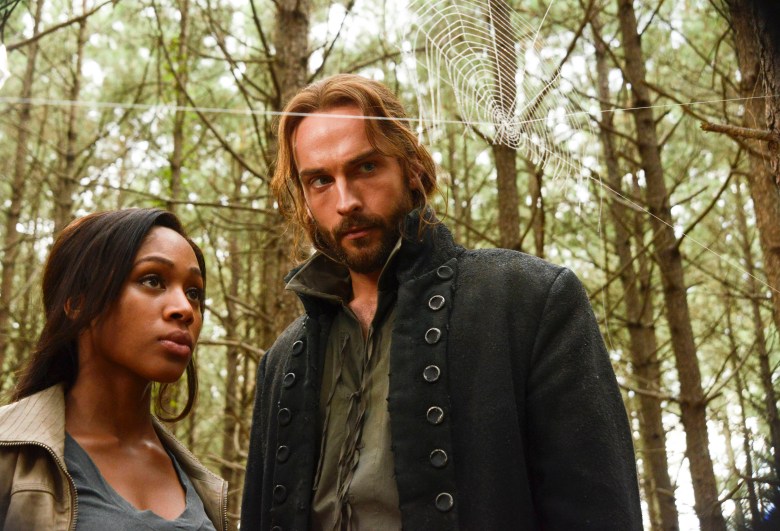 This week’s question: Which show that actually made it to air has the most preposterous premise you’d ever encountered? (Shows past and present, no matter how long they lasted, are fair game.)

I don’t really know if “Sleepy Hollow” truly had the most preposterous premise I’ve ever encountered, but it was the first show that came to mind this week, because it never should have worked. The show was built around the idea that Ichabod Crane was a hunky history professor-turned-soldier who woke up in present day when someone raised the Headless Horseman, who was revealed to be one of the Four Horsemen of the Apocalypse. That sounds like a lot on its own, but there was so much more: America had a magical history! There was a magic bible belonging to George Washington that explained all this stuff! There was something called a Witness who had to help Ichabod stop evil! The Headless Horseman rode around on a horse while using a shotgun! There was a witchy wife trapped in another dimension! All of this was laid out in the freaking pilot, and none of it should have worked. And yet despite its truly insane premise, “Sleepy Hollow” was a really fun show for that first season. I don’t know how. I truly don’t. This show tried to tell me that the Revolutionary War was also about saving the world, and somehow it made complete sense. I’m still kind of bummed network executives forced the writers to make the show more accessible in subsequent seasons, but it’s not like I don’t understand why. “Sleepy Hollow” was insane.

Look, I’ve only seen snippets of this show here and there, but the 1983 series “Mr. Smith” came up frequently in the book “The Sweeps,” one of my favorite documents of the era of broadcast network dominance, and I knew I had to find it. Created by legendary TV writers Stan Daniels and Ed Weinberger, who had both come up through the legendary MTM Productions label. The two had previously helped create “Taxi,” one of the greatest TV shows ever made.

But “Mr. Smith” was different. It was about an orangutan who became super-intelligent, then became a high-level government advisor. (Get it? He went to Washington!) Again, I’ve only seen a few snippets of this show, and I’m always hesitant to plunk down the money for a bootleg DVD set or something, but this thing is nuts, and it was a key part of Brandon Tartikoff’s strategy to revive NBC by courting quality programming, a strategy that had resulted in “Cheers” and “St. Elsewhere” the year before and resulted in “Mr. Smith” and several other famous catastrophes in 1983.

He did all right after that, though. 1984 brought “The Cosby Show,” which completely changed NBC’s fortunes. Alas, “Mr. Smith” was not around to benefit, but you can still watch this truly bizarre ad for “Dial-an-Ape.”

The 1983 “Manimal” was a trailblazer for the animal shapeshifting thing that “Game of Thrones” has excelled at, but a British professor morphing into any animal to solve crimes was a most ludicrous premise. People had to be on goofballs to green light that pilot after the pitch meeting.

The 1990s comedy pick was the “The Tony Danza Show” debacle. How did a freelance New York sportswriter named Tony DiMeo make a living? Layers of awfulness from every department above and below the line.

The 2000s yielded many an odious clunker, especially E! reality TV series “Leave it To Lamas,” which showed how Hollywood bloodlines could go rancid in a few generations.

But ABC’s “Cavemen” series in 2007 kind of was the alpha and omega odd premise head-scratcher. It featured the lives of the two Geico commercial cavemen (funny by the way) trying to live in a more evolved world. “Encino Man” at least had Brendan Fraser going for it.

Good god, I can only imagine the LISTS of implausibly concocted shows that are being rattled off in this week’s poll. Granted there are so goddamn many, but since this isn’t an essay question, I will go with the one show that still baffles me: “Married by America.” This was that Fox show from 2003 that paired up five people with total strangers CHOSEN BY VIEWERS who immediately got engaged and then had to decide over the course of a few weeks spent at a ranch whether they would get married in the season finale. It was bad from jump. The concept, the dollar-store production, the couples who looked like “Blind Date” rejects…the whole thing. And to make it even more of a waste, nobody wound up tying the knot anyway. Which is a blessing because, really, nobody should count on America to choose your spouse. We can’t even pick the right Idol. Or president. HOW DO I PICK BETWEEN MY FAVORITES? So many of the shows which have given me such joy to watch have invoked the word “bonkers” from me. But I’m going to go all the way back to the beginning (for me) with the weekday afternoon animated series “Gargoyles,” a show that BEGAN with the premise of “the gargoyles you see on buildings come to life at night and help solve crime like the Teenage Mutant Ninja Turtles,” and added magic, the fae, Shakespeare, cyborgs, an epic romance, hovercrafts, and even more weirdness. I loved this show so much. I in fact still do. Nothing prepared me better for the oddities of modern television than “Gargoyles.”

I just wrote about The CW’s Blind Sex Addict Solving Murders With The Help Of Her Dog dramedy “In the Dark” and it would be my answer again except that it hasn’t actually made it to air YET. So let’s see… Honestly, there are dozens. Doing “Archie” as a hyper-melodramatic murder mystery is pretty preposterous (and has sometimes worked). “The Secret Diary of Desmond Pfeiffer” and “Cop Rock” and “Pink Lady and Jeff” and “Manimal” were all mighty preposterous. But let’s be honest, it’s hard to get much more preposterous than making a TV version of a critically lambasted, box office disappointment of a movie with the laughable premise of a ditzy high school cheerleader with the absurd name of “Buffy” who fulfills an ancient prophecy by fighting vampires. If we can include animated shows, then it’s hard to top the fast food value meal hangout comedy “Aqua Teen Hunger Force” — in which a milkshake, some fries and a meatball lived together, and then it got weird — but I assume we’re talking live action, so I will mention a couple in the “What were they thinking?” category. In 1990, British broadcaster Galaxy once aired a sitcom called “Heil Honey, I’m Home,” about Adolf Hitler and Eva Braun living next to a Jewish couple. Hilarity most certainly did not ensue. And in 2012 (2012!!!), ABC debuted “Work It,” about two unemployed men who pretend to be women in order to get jobs in the pharmaceutical sales industry. And then of course there’s the “Bachelor” franchise, which asks people to get engaged and find true love after going on like three dates. Preposterous!

I remember LOLing when I first read about “Jane the Virgin,” but it’s not that strange when you consider its telenovela DNA. Plus, it’s good. I was also like, “Huh?” when I head about “Downward Dog,” but it’s also not completely out there. It also turned out to be delightful and I support great animal actors. In terms of pure ludicrousness, the only answer is “Zero Hour.” There were Nazis, clocks, Doomsday, clocks, submarines, clocks, secret societies, clocks, treasure maps, clocks, demon babies, and clocks. That’s all I remember and it’s more than I wish I did. Even though it was utter nonsense and Anthony Edwards deserved better, it was not surprising that this managed to become a real TV show. “Zero Hour” was one of those weird swings from former ABC Entertainment President Paul Lee where you’re like, “Sure, Jan” — though I can’t recall if this was one of his “sticky” ones — a “Lost” wannabe that thinks “complex” means “every ridiculous trope, all at once.” And clocks. So. Many. Clocks. I still can’t believe “Comrade Detective” is a real TV show. Even though creators Brian Gatewood and Alex Tanaka told me how they got this thing made, I still imagine the conversation went down like so:

Producers: “Hey, Amazon, can we make an ’80s era Romanian cop show that exemplifies communist propaganda of that time period, but pretend it’s an actual series from the ’80s that we’ve restored and dubbed with the voices of a bunch of American actors?”

Producers: “But just his voice — he won’t be onscreen.”

I’m glad the big spenders at Amazon said yes, but it goes to show just what the mindset was like over there before executives started looking for the next “Game of Thrones.”

A: “The Americans” (six votes)

This Article is related to: Television and tagged Buffy the Vampire Slayer, Criticwire Survey, Sleepy Hollow