At a Netflix Emmy event, the two TV legends traded philosophies about the disposability of comedy and if being an entertainer is an inherently selfish profession. 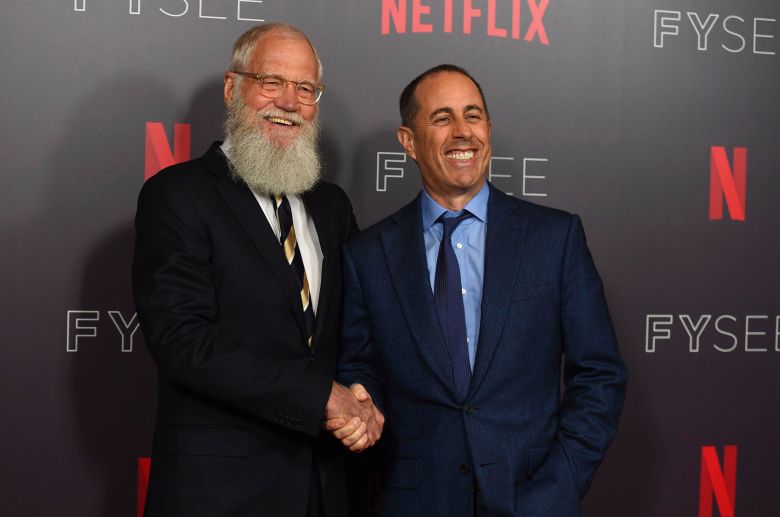 Between the two of them, David Letterman and Jerry Seinfeld have over a half century combined at the apex of the television industry. But on Monday night at Netflix’s Emmy-themed “FYSee” space in Hollywood, the two had a spirited conversation that ran the gamut of their respective careers, trading their thoughts on some more current issues along the way.

One of those subjects was Michelle Wolf’s recent set at the White House Correspondents’ Dinner, which drew raves from the “My Next Guest Needs No Introduction” host.

“You heard, from certain elements, outrage. Just outrage. ‘Oh my God, she’s set a grassfire and we’ll never put it out.’ The more I got to thinking about it, I thought, ‘Wow, that was great,’” Letterman said. “She had the guts to stand up there and didn’t apologize, when everybody is now apologizing for everything. So, whether you liked it or not, I really had great admiration for the fact that she was able to just walk in that room and decimate the place.”

As video cameras rolled on the For Your Consideration event, the evening went roughly similar to an episode of Letterman‘s new TV show. One main difference: Seinfeld is the only guest he’s had in this stage of his career who’s used to being the one in charge of the conversation. The evening went back and forth for much of the night, often with each comedian trying to get the other to admit how important they were to the landscape of American comedy.

As the two played keep-away for most of the evening when being pushed on the more tender subject of their careers, Seinfeld got Letterman to open up a little bit about the end of his “Late Show” tenure.

“When you’re in show business, it’s so self-consuming and so egomaniacal that you only look at a very small focus, which is yourself. If you have the ability and the energy to do that, you should do it. But don’t do it as long as I did,” Letterman said. “I did it too long. I should have left ten years ago, because then I could have taken some of that energy and focus and applied it to actually doing something good for humans.” The most fascinating part of the evening was when the two treated different viewpoints on fundamental ideas of comedy. After opening with a semantic discussion on the difference between a “comic” and a “comedian,” the two also talked about their differing reasons for wanting to do their own TV shows. (It was a conversation that dovetailed nicely with the different ways that people create for and consume entertainment on the very Netflix platform that now employs them both.)

“We were making a library of material, and I knew that. I’m killing myself to make this show this week, but we’re gonna have this as a thing. Whereas a talk show doesn’t really have a resale. You can’t do anything after you’ve made it,” Seinfeld said of making “Seinfeld.”

Letterman responded with a quote from the late Jack Rollins, his former manager: “Comedy is like a paper cup. Once you’re done with it, you just crush it and throw it away.”

Whether as a means to disarm his guest or just a logical extension of his conversation style, Letterman busted out a few non sequiturs about bowling, weight, and dry cleaning techniques from the ‘60s. But he eventually got to a very sincere place when talking about the nature of the industry and why he felt the need to stay in it all those years. “The thing about doing something for others is a version of being in show business, because ultimately it just makes you feel good about yourself. And being in show business and being able to get an enormous audience or to be able to get a small audience to applaud and laugh is so gratifying. It’s endlessly gratifying. It’s the same with doing something more tangible for somebody. The feeling you get from doing that is the same. It’s a selfish pursuit either way,” Letterman said.

Drawing an audible response from the audience in the FYSee space, Seinfeld respectfully disagreed.

“I think it’s a generous pursuit. Both of those things are generous. When you’re giving something to people that makes them happy, this is the best thing we can do in life,” Seinfeld said. “If you find yourself with something that’s good and you go through the hell of trying to turn your sense of humor into a show or a career, sure it’s great for you. But you’re missing the point if you don’t see the good that you’ve done.”

Even as the two jockeyed for interview position over the course of the night, they also took the opportunity to trade some friendly jabs. Seinfeld lobbed a couple of Letterman’s own questions back in his direction, particularly ones about his kids and vacation spots.

“We go all over the world on vacation, as you might imagine, to the most fabulous places, doing the most wonderful things. What would you do if you were me?” Seinfeld said, with a wry smile.

Maybe it was a response to Letterman’s earlier winking reply when Seinfeld had asked about various stumbling points in his career.

“Did you ever have something like that where something really knocked you down that ended up being a big positive in your life?” Seinfeld asked.

Watch a highlight of the conversation below:

“My Next Guest Needs No Introduction” and “Jerry Before Seinfeld” are currently available to stream on Netflix.