The love scene between Rachel Weisz and Rachel McAdams had everyone talking. IndieWire's Rude Jude asked audiences about the romance, the wigs, and that infamous spit exchange. 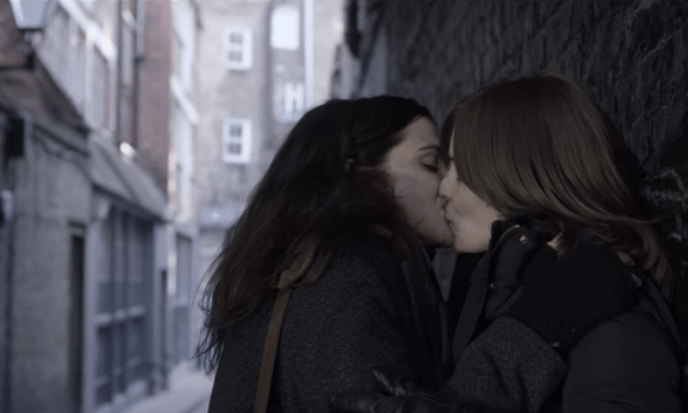 When “Disobedience” first premiered at the Toronto International Film Festival last September, the tender, forbidden romance between an Orthodox Jewish woman and her childhood girlfriend became upstaged by a short but memorable move during their one lengthy and passionate sex scene: The spitting. The six-minute-long scene was more respectful than the those in 2013’s controversial Palme d’Or winner “Blue is the Warmest Color,” but the sight of Rachel Weisz spitting into Rachel McAdams’ mouth caused as much of a stir. Equal parts emotional and animal, the women hardly remove their clothes in the scene, and the camera stays close on their faces throughout the pivotal consummation. The lesbian sex scene is a touchy subject in queer cinema; so often it is distorted by what Laura Mulvey termed “the male gaze.” “Disobedience” is a rare example of a man directing lesbian sex respectfully and authentically.

Based on the novel by Naomi Alderman and directed by Sebastián Lelio, “Disobedience” follows Esty (McAdams), a married woman from an ultra-Orthodox community who is in love with Ronit (Weisz), the rabbi’s daughter who left religious life as a teenager but returns after her father’s death. Dovid (Alessandro Nivola) welcomes Ronit into his home warmly, but soon must confront his wife’s predilections.

“It was probably one of the most intense films I’ve seen in my life,” said Liebe, a formerly Orthodox woman who saw the film at an early screening at the JCC in Manhattan. “The last film that came out framed the Jewish community in a really negative way—’One Of Us.’ People who don’t know a lot about Judaism saw that film and walked out thinking negatively towards the community, whereas this is real, and nobody’s a bad guy. That idea of choice is something that people grapple with every day,” she said.

Another woman named Dani was struck by an earlier sex scene between Dovid and Esty, which feels obligatory and dispassionate. “That was quite painful to watch, ’cause again, that could have been me,” she said. “What I really like about it is that it’s actually exploring two identities: It’s exploring the ex-Orthodox identity and the queer identity. What I think Rachel Weisz does so well is embody both of those identities together.”

Davy, who was raised in a conservative Jewish family, explained: “I have a lot of friends who are off the derach (off the path) because they’re queer. It’s definitely hard for them. But I think it’s so important to see themselves represented in media, as it is for everyone.” While most women felt the film honored Jewish community and tradition, Liebe did have one note. “My one critique is it’s not that easy to take off a wig… They usually have some sort of grip.” As for the spitting, Davy was open-minded: “It’s not a habit of mine, but to each their own. If that’s how they want to express themselves, that’s fine.”

Check out our interviews with audience members about “Disobedience” below.