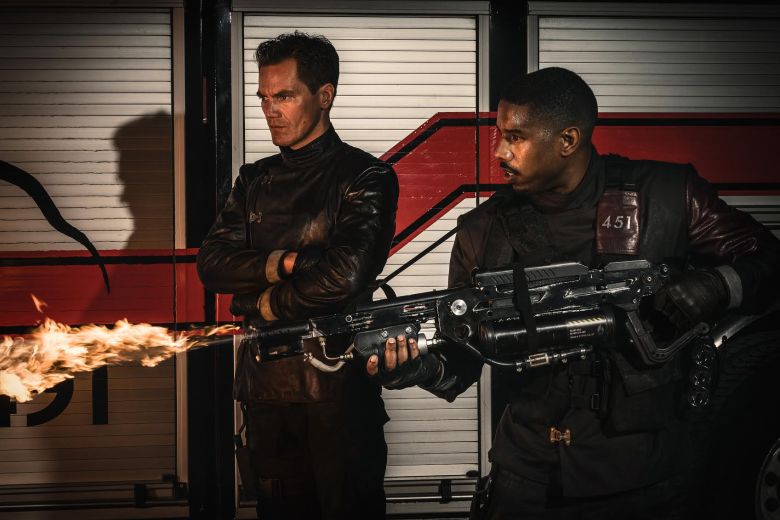 When Michael B. Jordan was first approached to play Guy Montag, the book-burning fireman-turned-resistance fighter at the center of “Fahrenheit 451,” he didn’t want the part.

“I was a little hesitant about playing this role at first because of the social temperature right now between police and my community,” Jordan told IndieWire. “I wasn’t really interested in playing an authority figure.”

At the time, Jordan hadn’t read Bradbury’s book, and after having lunch with writer-director Ramin Bahrani, reading his script, and studying the 1953 novel, he came around.

“My perspective started to shift a little bit, realizing the arc of Montag,” Jordan said. “He starts in one place — being very much the poster boy of the Fire Department, controlling information and knowledge, burning books and history and art — and he actually comes full circle. He starts to think. He gets into the resistance. He challenges what he’s being told is true. I think I found that very interesting and something that people really need to see right now.”

These principles are true for both Bahrani’s film and Bradbury’s book, but there’s plenty that has been altered. Timeless themes of government suppression and manipulative misinformation are as relevant as ever, and they come to life like the striking of a match in the new HBO film. But the story had to be altered to keep up with advances in technology and how information is accumulated. Below, Bahrani, Jordan, and co-star Michael Shannon break down the rationales behind some of the film’s biggest changes. When Bahrani first pitched the idea of adapting “Fahrenheit 451” to HBO, he was excited about how he could update the story from a ’50s version of the future to a 2018 look at what’s next.

“It had stayed in my mind as something that could be good to reimagine in modern times, mainly because of the growth of technology; specifically, the internet and social media. If I stormed into your home and burned all your books, you could just run out the back door and re-download them onto your phone and read them all again anyway, and you could really care less about a fireman.”

But at the same time, Bahrani didn’t want to entirely eliminate physical books from the film. (“I think they had to destroy things,” Bahrani said.) Books remain important to the movie not only in their prolific volume (which would make getting rid of them pretty difficult, even over decades of book burning) but in what they represent.

“I didn’t want to get caught up in movies where you’re staring at screens all the time,” Bahrani said. “Really what [we’re] getting into is consolidated internet and internet controlled not by a handful of companies but by one, right? Say if Google or Facebook joined forces and there was not much of anything else left, then they could control and censor anything. And suddenly physical things have a different power.”

That made the scenes involving physical books so much more important, like when Beatty asks Montag to hold a book, and Montag is amazed by just its feel and smell.

“It was cool to play those nuances [like] smelling the book,” Jordan said about that scene. “Ramin would always ask me questions, like, ‘What would you feel if you were holding something for the first time? It would be weird turning the pages, reading. How did it feel in your hands? The weight of it, looking at the spine of a book, just all those little things. You just want to be honest […] no matter how silly you may feel.” One of the big first-act changes the movie made was getting rid of Montag’s wife. In the book, Montag is married to Mildred, who is first introduced when she overdoses on sleeping pills and has to be rushed to the hospital. The next day, she doesn’t remember anything that happened or why she was driven to take so many pills.

“I always struggled in the adaptation with the idea that he had a wife that tried to kill herself, and then he met an old woman — which is the key scene in the whole book — who self-emulates for a cause,” Bahrani said. “I know that’s not the same as Millie’s suicide, but the idea of two suicides in one movie started to feel like a lot.”

In the film, Montag’s shift in ideology kicks into high gear when he watches a woman burn herself alive. It’s a scene that, as Bahrani mentions, is included in the book, but is much more critical to the lead’s transformation in the movie. For Jordan’s part, he used the scripts and conversations with Bahrani to inform his character much more than anything he gleaned from the book.

“The book is amazing,” Jordan said. “But when you’re adapting a film version of that, you really have the script and that text to go off of. That’s where our world is: in the confines of those pages of the script. Sometimes you read the original book and you might love things about it that aren’t necessarily in the script, and maybe subconsciously you might try to impose that on some of your character choices. So sometimes it’s better — at least to me, this is my process — to just stick to the script and if it’s relevant, it’s relevant. If it’s not […] it’s not necessary for me.”

Along that line of thinking, Bahrani was partially motivated to cut Millie’s character because of what’s changed between when the book was published and where things are today.

“A big part of Millie is that she’s staring at screens all the time at home, and when I started to look at that in the film, I was like, ‘Well, we kind of get the point quickly because we have those screens in our homes now.’ And in Bradbury’s time, we didn’t,” he said. “Seven-inch, black-and-white TVs were barely coming into people’s homes at that time.”

Bahrani also found that once Millie was removed from the narrative, other characters could flourish: like Clarisse, played in the film by Sophia Boutella (“The Mummy”). Clarisse Is an Adult Love Interest, Not a Teenage Neighbor

“Once you take Millie out, [Montag’s] relationship with Beatty and Clarisse and also Yuxie — which is kind of his wife in the movie — raises; it goes up,” Bahrani said. “And in the book, yeah, [Clarisse] is 17 and in my version she’s actually older than Montag; she’s older, smarter, more experienced, has been through different experiences and probably more depth of experience because she’s read and thought in ways that Jordan’s character has not.”

Though the duo does form a romantic connection in the film that wasn’t present in the book, it’s not a traditional coupling.

“Their love is a very strange one,” Bahrani said. “I see it more as a need. I think they’re connected by guilt. They each have some culpability in that old woman’s death. And each one seems to need the other one: Jordan to learn to move to where he’s trying to get to, and Sophia to maybe go back to where she had been. I feel they have a love connection, but I also feel that there’s something peripheral to that, I think more about themselves in a way.”

Continue reading for more differences, including a surprise twist on the ending.

Page 1 of 2
Continue Reading: ‘Fahrenheit 451’: Michael B. Jordan and Ramin Bahrani Break Down the Big Differences From Book to Screen

This Article is related to: Television and tagged Fahrenheit 451, Michael B. Jordan, Ramin Bahrani