"On-screen [representation] is one area of our society where you can make the change instantly," she said. "You don't have to sneak up on it, you don't have to do it slowly." 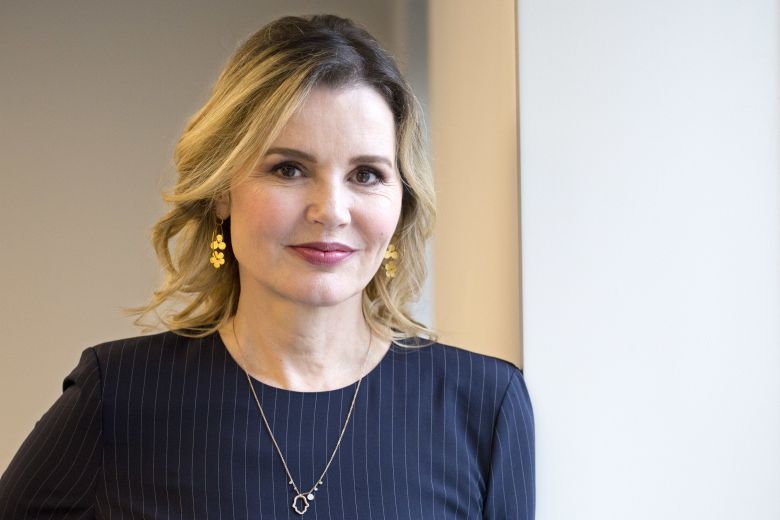 Geena Davis is ready for some changes. Admittedly, she’s been ready for some changes for awhile, but it finally seems as if Hollywood is catching up with the actress and activist’s biggest ideas, especially when it comes to crafting entertainment that’s as diverse as the world itself, a world that’s hungry to see more of that up on the big screen.

“When you have movies like ‘Wonder Woman’ and ‘Black Panther,’ which are insane blockbusters internationally, if we don’t create momentum out of that, shame on us,” Davis said in a recent interview with IndieWire. “There have been so many successful movies starring women or people of color that unfortunately didn’t result in momentum being created.”

Davis has been a long-time advocate of diversity in the industry, most visibly through her Geena Davis Institute on Gender in Media (founded in 2004) and the Bentonville Film Festival, which was created with the express aim to “champion women and diversity in film” and just wrapped its fourth edition in tiny Bentonville, Arkansas. Davis’ work at both the institute and the festival have given the Hollywood vet some keen insight into an industry that she already has plenty of first-hand knowledge of (after all, she has been a working actress for nearly four decades). Her thoughts about Hollywood and what it needs to do to evolve aren’t just anecdotal, they’re also steeped in hard numbers.

As she shared, her institute recently examined the 100 top films from 2017 and found that films starring a female character made 38% more at the box office than films starring a male character. That women-led movies make more at the box office isn’t a surprise, because it’s a stat that’s been reported consistently for years, but even Davis was blown away by the newest results (the full, official study is soon to be published).

“It’s been higher for all of the years that we’ve studied it [since 2015], but now 2017 is just astronomically higher,” Davis said. “We researched the same thing for diversity and found that films with more diversity in the cast make more money. It obviously makes sense, our country is just 51% female and 38% people of color, so what’s the deal?”

It’s not just that diversity is profitable and representative of the real world, as Davis tells it, it’s also easy. “On-screen [representation] is one area of our society where you can make the change instantly,” she said. “You don’t have to sneak up on it, you don’t have to do it slowly, slowly promote people, you can go straight to task, straight to tremendous diversity in the very next project you make.”

Davis’ investment in on-screen diversity has been a cornerstone of her work for many years, much of which hinges on the simple idea that “if you see it, you can see be it.” That’s the power of entertainment, and Davis is optimistic that it can be harassed for good, and fast. Patty Jenkins and Gal Gadot on the set of “Wonder Woman”

“It’s the lowest-hanging fruit,” Davis said. “And it is actually the one with the most impact. Our motto is: If they see it, they can be it. If we start showing more women [on-screen] as politicians and presidents and CEOs and board members and police officers, we’ll have a big impact on what happens culturally. That will make a huge, huge change, and then life will imitate art. You don’t have to wait for society to turn around and then we’ll reflect that. We can actually change what happens in the real world because if people see it, it happens in real life.”

One of Davis’ primary functions at her institute is to meet with Hollywood bigwigs to chat about what they’re making and how to make it more reflective of the world at large. While she’s been inspired by the success of films like “Black Panther” and “Wonder Woman,” she hopes that studios are taking away the right message from their box office haul: mainly, they don’t need to be imitated to cook up another hit.

“We really have to start making these changes,” she said. “What I say to everyone I talk to, every studio and production company, guild and network, is: Whatever you’re working on, you don’t have to only make ‘Wonder Woman’ and ‘Black Panther’ with a female star or a person of color as the star. Make whatever you were going to make, but populate it as the world is. Put in half women and lots of diversity in what you’re creating, whatever it is.”

Davis knows that change is hard, but essential, and even she’s fighting to make sure she doesn’t overlook any chances to make a positive impact.

“I have a mind to start a new campaign, or just an extension of what I’ve already been doing, but to adopt as my new motto: No more missed opportunities,” she said. “I want my message now to be: Don’t miss anymore chances. No missed opportunities where, if only I’d spoken to you, you would have said, ‘Oh, why are we doing that? Let’s make it half and half.'”

Her work at the institute is particularly focused on children’s programming — basically, she wants to get to the people who get to audiences early, all the better to enact change from the bottom up — and Davis still sees plenty of room for improvement there, too.

“It’s so self-evident that kids should be seeing boys and girls share the sandbox equally, and you’d think it would be absolutely no problem, that it would just magically happen that way, but it doesn’t,” she said. “That why everybody has to stop and think. I would like everybody to, before they cast something, before they start to make it to say: ‘All right, just wait one second here.'”

Even in programming aimed at kids, Davis sees pervasive biases against diversity, especially when it comes to gender, with many shows still just throwing in one female character and thinking that covers all their bases. It doesn’t, and it only spreads further into an industry that struggles with parity (simply a reflection of the world at large; 51% of the world is women). Despite her years of work in in this arena, Davis isn’t at all jaded. She’s just eager to continue to educate people and businesses. That’s where change really happens.

“Everybody has to get incredibly conscious because that’s the thing about unconscious bias: It’s unconscious and we don’t realize that we all have it,” Davis said. “The universal reaction every time we make a presentation, especially the first presentation, is the same: Their jaws are on the ground. They had no idea they were leaving out that many female characters.”

It’s not just on-screen women that inspire Davis. An original member of the Time’s Up initiative founded earlier this year, Davis believes that both it and the #MeToo movement are “total game-changers,” the kind she’s been waiting for and working towards for years.

“This really is a tipping point which I’ve been waiting for forever,” she said. “But this is it. It really is going to make some dramatic change. It already is and has and will continue to. Will there be backlash? Of course, always there is. Will we take one step back? Yes. We’re in the middle of a cultural shift and…it has yet to peak. I think this is something that’s just going to grow and grow for now. I’m excited to see what changes we can get in place.”

She’s ready for it, too. Billing herself an “impatient optimist” in the vein of Bill and Melinda Gates, Davis is fixed on the future and hopeful that changes will continue to come fast and furious — and very close to home.

“Man, we’ve got some hard work ahead,” she said. “But, there’s no excuse if we can’t make progress very quickly in the film industry.”