Plus, the origins of Eve’s habit of fussing with her hair. 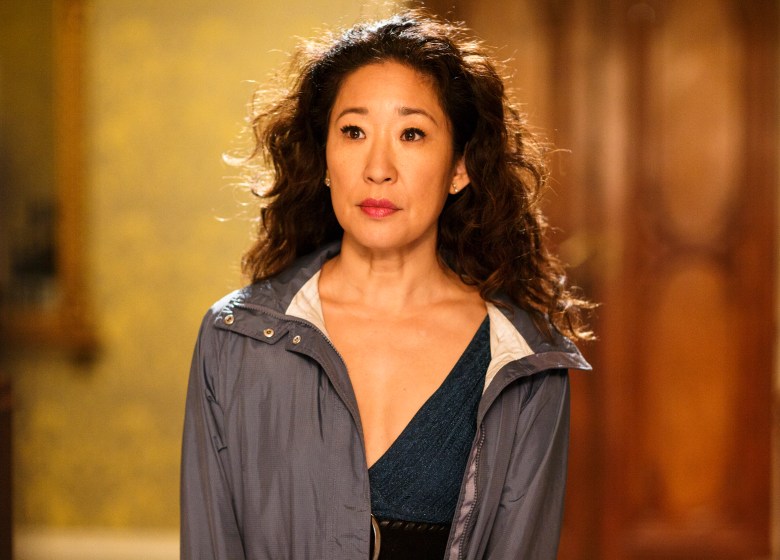 [Editor’s Note: The following contains spoilers from “Killing Eve” Season 1, including the finale.]

“God, I’m tired,” Sandra Oh’s character Eve Polastri says in the Season 1 finale of “Killing Eve” before flopping down on the bed in front of the assassin she’s been tracking throughout Eurasia. Those three words also serve as the title of the episode, mirroring Oh’s feelings of weariness in making the project.

“There’s something about the kind of psychological and psychic weight of going into these dark places that kind of lingers, like a bad cough lingers in your lungs,” Oh said in an interview with IndieWire. “I will say that it was actually physical. I found the shooting schedule and the demand quite intense and so I was really adapting. A lot of my focus was making sure that I had enough energy to keep going… making sure I have enough vitamins. Oh my god, yeah, there was a lot of care around that.”

Care appears to be her watchword in how she approached the role and even this interview. Oh is deliberate and thoughtful in her answers, to the point where she even stops the phone call because she can tell she’s distracted by another matter. Once that has been taken care of, she calls back with her full attention devoted to the subject at hand.

It’s no wonder then that Oh found the work on “Killing Eve” exhausting, given the amount of meticulous work required in crafting a character who’s driven by complex and conflicting desires. In the BBC America thriller, Eve Polastri is an MI5 officer who is fixated on an assassin only known as Villanelle (Jodie Comer), who is drawn to a flamboyant lifestyle and equally showy ways of murdering people. Once the killer is aware of Eve, the feeling appears to be mutual, and the game of cat and mouse gives way to a far more intimate and dangerous dynamic that pushes Eve to act out of character.

In the final confrontation, she tells Villanelle, “I have lost two jobs, a husband, and a best friend because of you.” She may have listed among her losses her moral center, her mind, and self-control as well. In contrast, Oh is completely in control of every aspect of this character, a woman who had never acknowledged what she truly wants. Pre-Villanelle, Eve was content with her uneventful life. Focused on the more lurid aspects of her job, she is unconcerned with the particulars of her day-to-day existence that manifests in a sort of artless charm.

“I feel that she is a pretty good combination of being conscious and unconscious,” said Oh. “I don’t think that she’s paying attention to how she looks or how heavy her handbag is or what groceries she might be picking up. She’s paying attention to only the things that are really interesting to her. And I think that can just bring up different potentially awkward kind of characteristics. She’s not cool, despite how boring seems like cool; it’s like she’s uniquely awkward in her own way.”

Despite Eve’s more practical focus, something in her awakens when she’s fussing with her hair in the bathroom mirror and for the first time encounters Villanelle, who advises her to “Wear it down.” Throughout the rest of the season, Eve can be seen putting her hair up or taking it down as if it were a compulsion. Oh reveals that this tendency is partly taken from her own real-life habits and partly as Eve’s reaction to Villanelle.

“That’s my hair. It’s not like I’m doing something that is not familiar to me. So I do do that but I absolutely put that in based on the first meeting in the bathroom,” said Oh. “It was just a piece about the hair, so I just wanted to plant it in early on and continue it as a character thing. Because also, those are the things that I feel make stuff real. You don’t really pay attention to how much you might rub your lips, or rub your eyes. But that’s particular to you, a particular character trait.”

That state of Eve’s hair reflects how she’s feeling about herself and the object of her obsession. When Villanelle sends her a stunning and sexy dress exactly in her size, the practical side of Eve is forgotten. She not only tries the dress on and admires her figure in the mirror, but the hair comes down for this also. She can’t seem to help herself, and in this way, Eve is perhaps more like her quarry than she’d initially thought.

“Eve in some ways can’t hold back. That’s also what gets her into trouble,” said Oh. “And obviously, Villanelle, she’s so attention-hungry that she doesn’t ever hold back. She blatantly throws it all out there.” Halfway through the season, Villanelle breaks into Eve’s house and forces her into a strange farce in which Eve plays host and serves her guest/potential killer microwaved shepherd’s pie. Despite the mundane fare and setting, the dinnertime conversation is anything but as each party tries to feel out the intentions in the other.

“In that scene in the kitchen, Jodie and I are really just playing off of each other, and there’s this kind of creepy and scary and mysterious dynamic that is bubbling up,” said Oh. “Of course, it’s in all the previous episodes that lead us to this point and it’s in the writing, but because we also took our time, no one’s speeding along in that scene. We’re following Eve trying to solve mysteries. We’re solving not only who Villanelle is, but solving things along the way, so I think maybe that adds to a certain amount of tension, the unknown.”

This tension is tied to one of the funniest moments in the series. As Villanelle holds a knife up to Eve’s neck and demands the PIN number to her phone, Eve is terrified as she admits that it’s “1234,” aka the laziest and worst passcode for a government employee to have.

“I feel like I remember being with [showrunner Phoebe Waller-Bridge] when we came up with that,” said Oh. “We were just like ‘What would be hilarious?’ And then I just started screwing around of how you make that funny. I really remember when we came up with that PIN number. I was pleased with that how that scene turned out because Eve is never away from being frightened for her life. And those are the moments where I felt like we were so totally on point, because she’s in the moment, it’s completely grounded, and it’s hilarious because she, like millions of people, make their PIN number ridiculously easy.”

This type of collaboration was typical on set, and as IndieWire previously reported, a wine-drinking session with Waller-Bridge led to that crazy final interaction in which Eve stabs Villanelle and then regrets the action and tries to help her victim.

“It was the two of us discussing it and both of us to say that at the same time, we just knew it was true, and that that instinct was right,” said Waller-Bridge. “That’s what’s so wonderful when you work closely with actors, because you can feel like it really confirms your instincts sometimes. And so that was that came out of a busy, busy dinner/script conversation.”

Comer is just as enthusiastic about working with Oh, whom she recalls was “generous” even during her callback for the role.

“From the moment I met her, I’d always thought that she was rooting for me and wanted me to do well,” said Comer. “She wants to get the best out of the work, and in order to do that you have to work with people and encourage people and build people up. She did that from the get-go.”

As for building up Villanelle and Eve’s unique chemistry, she added, “It’s something that me and Sandra were trying to figure out, which I think is lovely because as the episodes go on and we found the characters. They’re just so drawn to each other.” All of that devotion and effort has come across on the screen and resonated with viewers. “Killing Eve” has done something that is rare for a scripted show on television today: achieved consecutive ratings growth over its first seven episodes. It’s also one of the top five best-reviewed dramas of the year. Even though the series was renewed for a second season even before the first premiered, its performance has far exceeded BBC America’s expectations.

The series is getting strong awards buzz as well, much of it for Oh’s nuanced and fearless performance and the show’s writing. The actress is no stranger to accolades having earned a Golden Globe and numerous nominations for playing Cristina Yang on “Grey’s Anatomy.” But some rewards aren’t measured in ratings or statuettes.

Earlier in the year, Oh had admitted in an interview that the racism in entertainment has been so ingrained in her that when she read the script initially, she didn’t think she was being offered the lead because she’s Asian. She still has mixed feelings about the importance of her playing this role for Asian representation, feelings intense enough to make it difficult for her to put into words.

“There’s so much emotion behind it. There’s a part of me that doesn’t want to touch it because I don’t want to take on anything that I can’t take on,” she said. “I know why I do what I do. Part of that is absolutely to not only put the salve on myself, but for my community. But I can’t really speak about the meaning of it in an outside way. I can tell you that it has meaning for me.”

[Editor’s Note: IndieWire’s Consider This series is meant to raise awareness for Emmy contenders our editorial staff and readership find compelling, fascinating, and deserving. Running throughout awards season, Consider This selections may be underdogs, frontrunners, or somewhere in between; more importantly, they’re making damn good television we all should be watching, whether they’re nominated or not.]

This Article is related to: Awards and tagged Emmys, Killing Eve, Sandra Oh