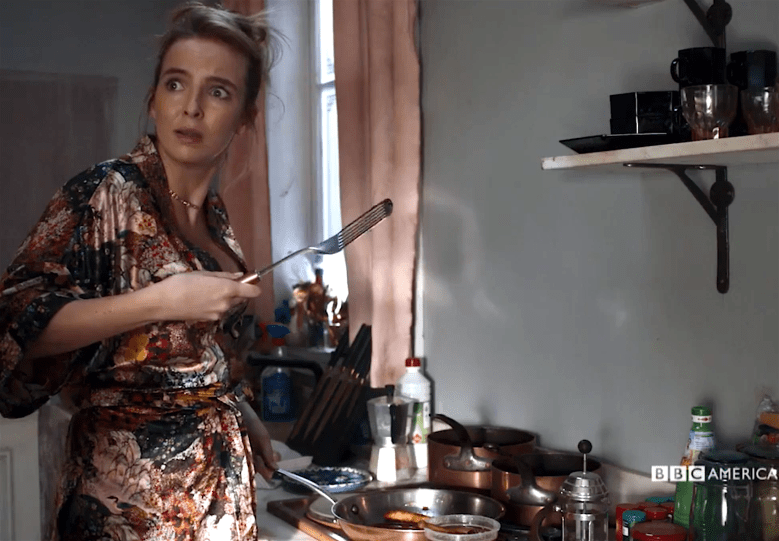 “Killing Eve” is a show about many things: flexible morality, redefining identities, unacknowledged desires, obsession… and sausages. In the series’ first season, the meat product is either mentioned or makes an appearance in four of the eight episodes. That’s half of the season that devotes some time to ground meat in casings.

What exactly is the importance of sausages in a show where MI5 officer Eve Polastri (Sandra Oh) is trying to capture a flamboyant assassin known only as Villanelle (Jodie Comer)? IndieWire spoke with series showrunner and writer Phoebe Waller-Bridge to see if there was a link, so to speak, between sausages and some bigger meaning in the series.

“If you don’t know the answer to that question, then you are a sausage yourself,” Waller-Bridge said with a laugh. “No, the honest answer about that is that with things like that, I’m not always completely aware until people tell me. I didn’t realize how many sausages [there were].”

Here we pause in Waller-Bridge’s ruminations on sausages to review and examine all the ways that they have been used on the show to see just how prevalent the protein product has been:

Sausages as a Calming Presence and Foreshadowing

The first inkling that viewers have of the part sausages will play in the series occurs in Episode 4 during a rendezvous between Eve and her MI5 boss Carolyn (Fiona Shaw) at a butcher’s shop. Eve has had what she believes is a lead in identifying the mole who had compromised her now-deceased partner, and is in a rush to tell Carolyn, who advises her, “Take a minute. Look at the sausages.”

The calming tactic apparently works as Eve is faced with a butcher’s glass case full of the meat in question, some made with chiles.

Distracted by the preponderance of meat, Eve is able to gather her thoughts before laying out her findings to Carolyn. The comment about the wealth of wurst is also a promise to the viewers what more literal and figurative sausages are to come.

Sausages as a Phallic Stand-In

“Killing Eve” is an unapologetically female-centric series. In fact, the entire endeavor is so estrogen-heavy that the male characters are often sidelined, killed off, or relieved of their penises altogether. Villanelle herself has been known to target men to kill and upon whom she’ll perform a postmortem penectomy.

Waller-Bridge’s sensibilities permeate these female-first actions and humor as well. One sequence in Episode 5 highlights just what sausages can mean. After Eve reveals to Carolyn that the assassin killed the MI5 mole and “chopped his knob off,” the show cuts to a scene where Villanelle is frying up some bangers in a pan.

Such a blatant (and hilarious) sequence dares the viewers to make the obvious connection. What’s next? A kill then kielbasa? On a show where violence to the male anatomy is discussed or occurs often, the ubiquity of sausages and their consumption is begging for interpretation. Freud would be proud.

Sausages as a Diversionary Topic

Villanelle’s handler Konstantin (Kim Bodnia) also happens to be one of Carolyn’s Russian contacts from the past. When Eve questions why a key informant had been conveniently killed in a Russian prison, Konstantin is eating breakfast. “These sausages are so good,” he comments while she hammers him for answers.

This time, however, Eve is not distracted by talk of sausages. She perhaps has become immune to such tactics, and her persistence angers Konstantin who abruptly ends their conversation. Before he leaves, he adds in one last-ditch attempt to shift focus, “It’s been good to see you again. I advise you to have a sausage and go home. You’re welcome to stay, but you haven’t been invited.” At this point, it seems that the meat has become something of a threat.

Sausages as a Term of Endearment

On the flip side, we see that Konstantin wields his sausage talk with flexibility. When he arrives home and approaches a blanket fort where he believes his daughter is hiding, he says, “I’m coming. Looks beautiful, sausage.”

Alas, it’s not his daughter who resides within but Villanelle, who sounds quite put out that Konstantin had reserved such a pet name for his daughter. “You’ve never called me sausage before,” she observes.

This exchange even surprised Waller-Bridge, who at this point can’t ignore how much sausages have infiltrated her mind and dialogue.

“I mean, I knew about the sausage in the pan, but then when Konstantin then calls his daughter sausage later, I think it’s some kind of subliminal sausaging going on in my head,” she said with a laugh. “Oh, yes, the butcher as well. My god!”

The Secret to the Sausages

The answer to all the sausaging, subliminal or otherwise, could be far simpler though. As Freud has also been known to say, “Sometimes a cigar is just a cigar.”

And therefore, the sausages may not have a deeper meaning. That doesn’t mean that they don’t serve another purpose besides onscreen sustenance, however. Waller-Bridge had one last bit of speculation about their role on the show.

And there you have it. Sometimes the best ways to inject humor are the wurst.