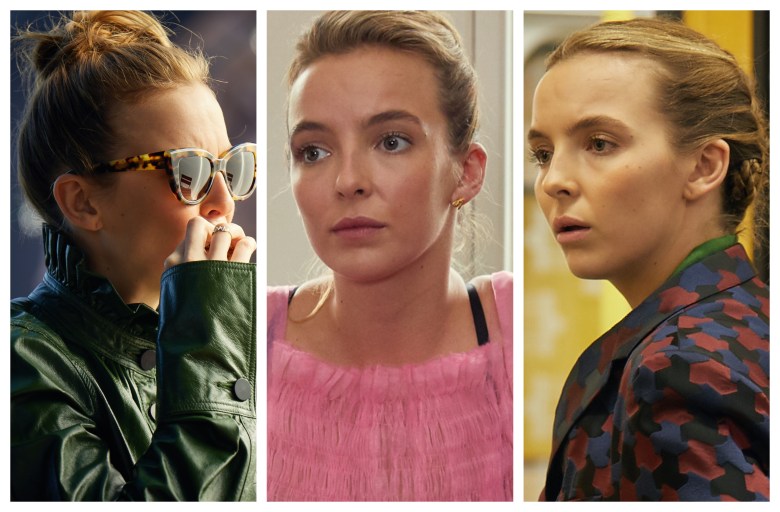 [Editor’s Note: The following contains spoilers from Season 1 of “Killing Eve,” except for the finale.]

Actress Jodie Comer loved her patterned “Killing Eve” suit so much, she wanted to take it home with her and wear it. The only problem? It’s so indelibly linked to her assassin character Villanelle that she’d just end up looking like the killer herself. That’s perhaps not the impression she’d like to make in real life.

“It was super comfortable, I actually really wanted it but then by the time it got to the end of the show I was like ‘It’s too much,’” she said in an interview with IndieWire. “If I wore it on the streets I’d feel a bit weird. People would be like, ‘What the hell have you done?’ So better not, better just give that one up.”

The suit is one of the many iconic looks that Villanelle wears on the BBC America series that also stars Sandra Oh as Eve Polastri, an MI-5 officer bent on capturing the killer. Apparently, being an international assassin is lucrative, and Villanelle spares no expense to look fresh, youthful, and stylish as a reward for a death well done. While the ensembles are eye-catching, they also reveal her rather theatrical, humorous, and narcissistic nature.

The brocade Dries Van Noten suit she wears around Berlin is memorable for its incredible fit and pattern, but also because she looks amazing in it when she stabs Eve’s colleague to death in a busy nightclub. Costume designer Phoebe De Gaye spoke to IndieWire about finding the right suit. “I wanted her to have a kind of mannish look. I thought it was time for her to be dressed in a suit, but it should be very, very different obviously from Eve’s suits. Eve wears those Uniqlo suits, sort of Uniqlo mixed up with charity shops,” said De Gaye. “So we had a Dries suits because it’s got shape and it’s just has a single button so it’s quite low at the front, it’s quite sexy.

“It was a lovely great color for night because it sort of really gleamed but in a quiet, in a slightly sinister way. It was almost metallic and it had this strong graphic pattern. So I thought well that would look good in a nightclub with all of the strobing lights. Also… in the underground metro system in Berlin, there’s this really strange, strong green light, and I thought it would look very good against that color too.”

It makes a twisted sort of sense that Villanelle would wear such a suit in this instance. It’s practical from a comfort standpoint and also means business — the business of killing, that is. But it also draws attention, which shows just how cocky she is about not getting caught despite standing out.

Here’s a breakdown of some of Villanelle’s other striking looks, including that froufrou pink dress. Plus, De Gaye also discusses that gown that Villanelle bought for Eve that also had to be fitted for a man. Villanelle is driven by whimsy and doesn’t follow fashion convention, which allowed De Gaye to have fun putting together the eclectic outfits.

“The main thing I was looking for with Villanelle was she changes, chameleon-like, in different situations,” said De Gaye, who had put together a mood board to convey her concept of the character. “I remember I found a great fashion image of somebody shimmying down a drain pipe wearing a kind great floaty thing. Then also I was looking for things which were playing with the masculine and feminine side to her because she’s sort of slightly ambivalent.”

Therefore, when Villanelle must attend a mental evaluation to see if she should allowed to continue playing hitman, she dresses in the most bizarre, attention-grabbing way. It’s almost like a little girl who is playing dress-up, and her manner at the session is mocking and playful.

“In the script, [showrunner] Phoebe Waller-Bridge said that she should be wearing a big pouffy dress,” said De Gaye. “I thought, ‘Well, Molly Goddard has those. Let’s go and get one of those.’ And the pink was such a great color. Bubblegum.

An Array of Outerwear The assassin on the go must be prepared for any eventuality, and that means layering coats and jackets to keep the chill out. While Villanelle’s love of pink extended to a pink coat that she wore before reentering prison, and a dusky rose trench coat that’s seen in the first episode, she wears shorter, more practical jackets when she’s on the job.

In the second episode, she’s seen through high-rise office windows stalking her next victim. “It’s like a fashion version of the MIA jacket,” said De Gaye. “It’s Miu Miu jacket and then they put patches and sewed some patches in the sleeves. She’s got plaits and she sits in the swing chair after she’s killed and sort of looks a bit bored. It’s always a little bit different; you aren’t able to pin her down.”

Read More:‘GLOW’: The Backbreaking Challenge of Finding 14 Actresses Who’d Flip to Put Their Bodies Through Hell

When she’s spying on Eve in Berlin, Villanelle sticks with the green jacket theme, but it’s far more fashionable this time with the ruffled neckline (seen at top). “That was gorgeous. That’s a JW Anderson,” said De Gaye. “It’s leather, and actually she wore it with a lovely black leather tiered skirt, which I got for it. I thought you hardly saw it. You only saw the cuffs and the collar but fortunately, they’re quite noticeable.

One jacket seems a little out of character for Villanelle and for good reason. After she escapes from prison and goes to kill her handler Konstantin (Kim Bodnia), she’s wearing a strange fuzzy coat that looks like a stuffed animal with matted fur.

“Yes, that’s sort of High Street. It was cheap, cheap, cheap because by then on she’s on an outpost. It’s a slightly grim thing, those furry things that go all stringy. It’s also in a very beige-y washed-out color,” said De Gaye. “She’s given those clothes by [her new handler]. The people who give her the clothes know she likes clothes, so she might like something a bit funky. But it’s terrible, and so she should look quite sad, but she still wears it with her usual aplomb and everything.”

Continue to next page>>

This Article is related to: Awards and tagged BBC America, Emmys, Killing Eve