Star Maya Hawke and screenwriter Heidi Thomas weigh in on the Laurie and Professor Bhaer dichotomy. 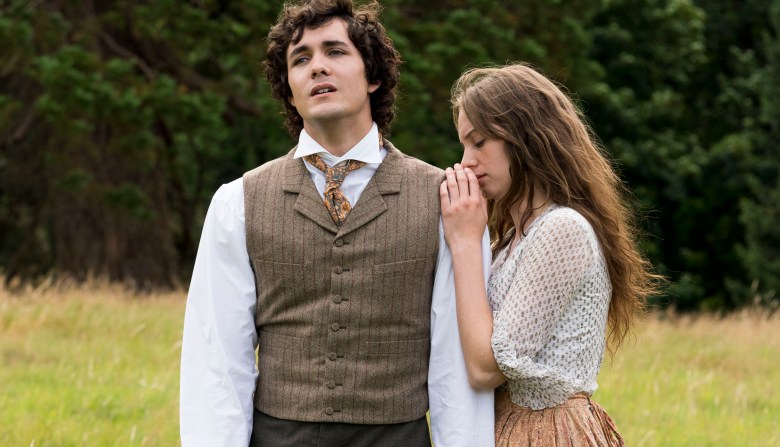 [Editor’s Note: The following contains spoilers from the second part of the PBS adaptation of “Little Women.”]

“Little Women” may be one of the most beloved American novels, but one major storyline has divided readers ever since it was published over a century ago. Although tomboyish writer Jo March had had a strong bond with the boy next door Laurie Laurence, she rejected his marriage proposal and declaration of love, vowing to never marry. But lo and behold, she later fell for and wed the much older and gruffer German professor, Friedrich Bhaer.

While a certain contingent of “Little Women” fans supports Jo’s mature choice, a very vocal majority have been vehemently against the breakup of Jo and Laurie.

“When I first read the scene, I could not begin to understand what Jo was doing,” Maya Hawke, who plays Jo in the “Masterpiece” adaptation, said of reading the novel for the first time in eighth grade. “I really didn’t. Laurie seemed so much like he was the dream boyfriend, and I couldn’t comprehend why she would turn him down.”

Author Louisa May Alcott’s life inspired the novel, which was actually written in two parts, and she herself remained single, which is why she had initially wanted Jo to remain unmarried as well. In her journal, she had written, “Girls write to ask who the little women marry, as if that was the only aim and end of a woman’s life. I won’t marry Jo to Laurie to please anyone.”

Instead, she found the unsatisfying compromise in Professor Bhaer, and later marrying off Laurie to Jo’s youngest sister Amy. Debates have raged ever since. Part of the conflict in fans is because the onscreen adaptations have played up the chemistry between Jo and Laurie: In the 1994 film version, Winona Ryder’s Jo and Christian Bale’s Laurie are absolutely smoldering, and what she finds later in the admittedly handsome Bhaer (Gabriel Byrne) just doesn’t compare. The courtship and building of chemistry between Laurie and Amy had also often felt similarly rushed and forced. In her performance as Jo, Hawke brings a far different dynamic between Jo and Laurie, played by Jonah Hauer-King. The actors had dissected the relationship, trying to find the way forward, and as an adult, Hawke’s interpretation reveals a far more platonic or sibling-style of chemistry in the two characters. In the scene where Laurie tries to kiss Jo while her sister is ill, and later when she rebuffs him, it’s clear to everyone except Laurie that they simply do not have the right sort of love between them.

“I changed my mind, now that I have a little bit of experience under my belt,” said Hawke. “His timing was terrible. She was grieving her sister, they’d been friends a really long time, and he’s jeopardizing their friendship by making it sexual. It’s a lot more complicated, and I relate to Jo a lot more in that moment than I did when I was younger. The idea that that moment could be clear, and how you could relate to her in that moment is all I wanted from that scene.”

Heidi Thomas, who had also adapted the memoirs that led to “Call the Midwife,” also went through a perspective shift between reading “Little Women” in childhood to present day when it comes to Jo’s two men.

“I have a son who’s just 21. I did find myself looking at Laurie through Marmee’s eyes as a mother,” said Thomas. “I can see his flaws more; his flaws are very appealing. He’s a lovely young man who has been damaged by his earlier upbringing and needs a family, and he needs a stable place on which to stand. I always found him romantically attractive when I was younger and now I find his vulnerability very appealing. So maybe my takeaway from adapting ‘Little Women’ is that I’m not in love with Laurie anymore because I’m too old. But it was interesting to go on that journey with him, as well.” In contrast, Thomas’ sympathies shifted to the German professor as she matured.

“With Professor Bhaer, Jo married someone of like mind. Having been married myself now for 27 years, I really understand that power of marriage to someone of like mind, which exists entirely outside of romantic attraction or first feelings for one another,” said Thomas. “And so, I worked on burnishing him as a character. I absolutely believe in him. I find him attractive myself because he’s committed, principled, and has a wide roaming intellect. And I just wanted to make sure all of those things were on screen to give everybody the best possible chance of believing in Jo’s happiness because I believe in it. Whether Louisa May Alcott did herself remains a matter of conjecture, and I’ll never be able to meet her to suss it out.”

Therefore, while Hawke and Hauer-King worked to lessen the romantic chemistry in their performances, Thomas gave the professor extra chances to prove his worth to the viewers. For one, we see that the philosophical symposium that Bhaer brings Jo to have an impact in her. She is in raptures over the ideas, and this plays out in animated dialogue, which gives the first inklings of real likemindedness between them.

“I fleshed him out a little bit in New York because I wanted to make it clear that it was an intellectual union between them. We actually have the whole philosophical symposium because Jo is present and describes the event and the opposing arguments,” said Thomas. “My son’s a philosophy major, actually, and I showed [the scene] to my son and he said, ‘Well, this is Kant and this is Hegel that they’re spouting.’ And then we actually contracted it, just for production reasons. It was going to be too long, and we didn’t have an appropriate set. So it played out in the dialogue between them. But it’s very much rooted in the novel and it’s justifiable. And my son did write that dialogue.”

Few interactions between Jo and Bhaer are described in the novel, which is why each scene has so much impact on how the audience gauges the couple’s compatibility or lack thereof. One in particular paints the professor in a more negative light, at least by modern standards. After learning that Jo writes sensationalist fiction in order to earn money, he scolds her for wasting time on such morally bankrupt drivel. This has always made him seem judgmental, condescending, and almost like her father – not what one would wish for as a lover for the spirited heroine. In the PBS adaptation, however, Thomas has Jo defend her actions because the money she earns supports her family, but also has Bhaer (Mark Stanley) say he was sorry for his harsh condemnation.

“That was the one thing I did, I made him apologize because he was too censorious,” she said. “I felt Jo had already survived the censoriousness of her father about writing popular fiction and I didn’t want the same note to be sounded by a second character, particularly one that she is going to marry. So, I made him apologize, which was a bit modern of me. If we allowed him to be so authoritarian, we would not believe that this Jo, and modern girls would not believe that Jo would marry and fall in love with him.” One more aspect of the “Masterpiece” version gives this Professor Bhaer an edge over the past ones. Stanley, an actor best known as one of the Night’s Watch from “Game of Thrones,” is younger in age than Bhaers past. That means the age gap between him and Jo is smaller, only about 10 or so years, versus the 20-plus-year gap in previous versions. The casting in this modern retelling of the story, therefore, goes a long way in eliminating that icky paternal vibe and ushering in a more romantic one. It’s upended the “Little Women” ‘shipping for a whole new generation.

“Little Women” is available On Demand, for streaming for a limited time at PBS.org, and for purchase on iTunes and Amazon.