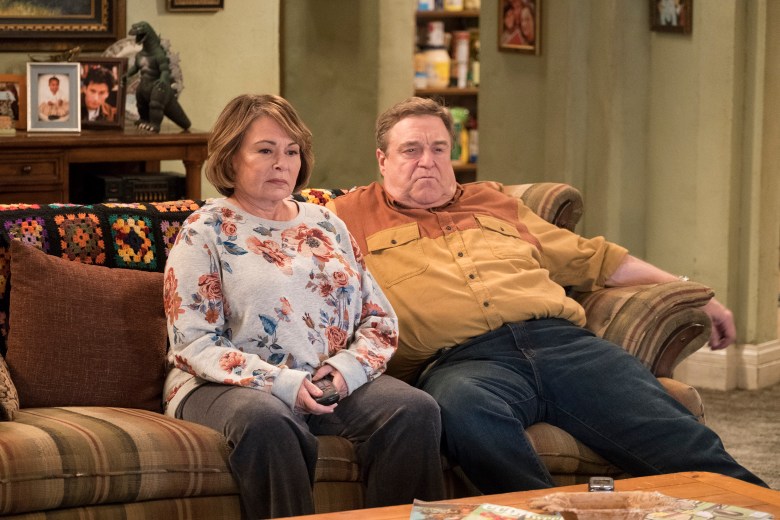 ABC Entertainment president Channing Dungey stands by a joke on “Roseanne” that was perceived by some as a slight against a couple of her network’s sitcoms, “Black-ish” and “Fresh off the Boat,” the ones with more racially inclusive casts.

In an episode earlier this spring, Roseanne and Dan Conner (Roseanne Barr and John Goodman) wake up in front of the TV, realizing they missed everything between “Wheel of Fortune” to “Jimmy Kimmel Live” while watching ABC.

“We missed all the shows about black and Asian families,” Dan said — clearly a reference to ABC’s “Black-ish” and “Fresh off the Boat.” Quipped Roseanne, “They’re just like us. There, now you’re all caught up.”

Speaking to reporters on Tuesday while announcing ABC’s fall schedule, Dungey noted that she was surprised by the negative reaction.

“We felt like the writers were simply tipping their hat to those shows, and it certainly wasn’t meant to offend,” she said. “I do stand by the ‘Roseanne’ writers in terms of the decision to include that line. I think they felt that they were expressing a point of view of the Conners in terms of what they would have actually said. We do similar things on some of our other shows too. We’re very clear on ‘Black-ish’ how many of the opinions and views expressed are those of Dre Johnson.”

That flip remark was noted by many, including “Bob’s Burgers” writer Kelvin Yu: “At the very least, it’s reductive and belittling, as if to say those shows are nothing more than ‘Black’ and ‘Asian’ in their existence,” Yu wrote on Twitter. “But the real kicker is when Roseanne says: ‘They’re just like us. There, now you’re all caught up.’ Which implies that the point of any show about a minority family is simply to normalize them. That’s it. The stories, the humor, the characters… not important.”

“Black-ish” creator Kenya Barris also recently told IndieWire that while he was happy with the success of “Roseanne,” “I’m not happy with some of the things that were said on that show, I’m not happy with some of the optics around the show. I am very happy for the writers that I know, Bruce Helford is a friend, Whitney Cummings, Morgan Murphy, Wanda Sykes, there’s some great guys on that show. That show deserves a place and deserves a voice just like our show does. That aspect is positive. Some of the things around the show do have some negativity.

“That show is special,” he added. “I was a big fan. I’m happy to see network television getting those ratings because it’s good for all of us.”

Dungey agreed that Barr’s outside politics — including her support of Donald Trump — may be coloring viewers’ and critics’ take on the content of “Roseanne.”

Separately, Dungey was also asked about the “Black-ish” episode “Please, Baby, Please,” which was pulled by the network over content concerns.

At the time Variety wrote that the episode tackled multiple political and social issues of concern to Dre, including athletes kneeling at football games.

“We have long been supportive of Kenya and his team tackling challenging and controversial issues in the show, and we have always traditionally been able to come to a place creatively where we felt good about the story he was telling, even if we felt it was pushing some hot buttons,” she said. “And he felt he was getting to share stories the way they should be shared.

“With this particular episode, there were a number of different elements to the episode that we had a hard time coming to terms on. Much was made about the kneeling part of it, which was not really the issue. I don’t want to get into that too much. At the end of the day, this was a mutual decision that was made by Kenya and the network to not put the episode out, and I think we all feel it was the best decision overall.”

Star Anthony Anderson recently told IndieWire, however, that he hopes one day the episode is screened.

“I don’t think it’s as controversial as people think it is,” he said. “But hopefully, one day it will be aired. The lost episode of ‘Black-ish’ will see the light of day. I’d be interested to see and hear the comments once it does air. But everything we do is pretty good, and I think that was one of our better ones, so hopefully, it does see the light.”

The situation led to some speculation that Barris might be looking to leave his ABC Studios deal early in order to set up camp at Netflix or another home. For now, however, Dungey noted that Barris is under contract at ABC Studios — and indeed, on Tuesday, ABC sister network Freeform picked up a new series from Barris and Ranada Shepard, “Besties.”

This Article is related to: Television and tagged ABC, Black-ish, Roseanne, Upfronts