Kore-eda Hirokazu reaffirms himself as one of the world's best auteurs with this heartbreaking drama about a different kind of crime family. 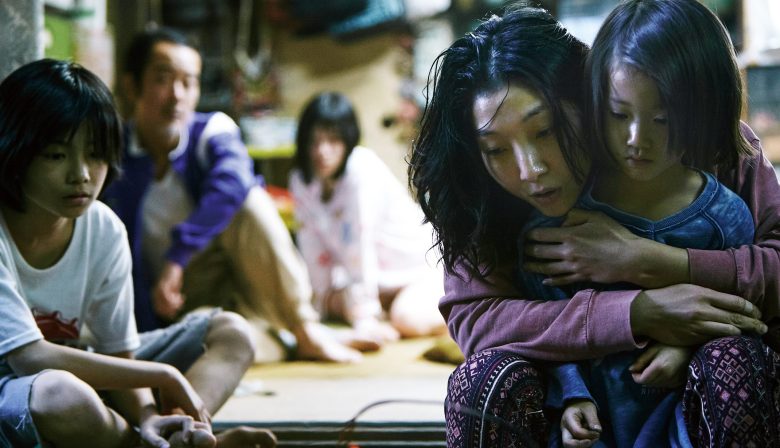 [Editor’s note: This review was originally published at the 2018 Cannes Film Festival.]

Osamu and his wife Nobuyo can’t afford to have sex anymore. Middle-aged and marginally employed, the Shibata couple is crammed into a ramshackle apartment on the outskirts of Tokyo, along with a pre-teen son named Shota (Jyo Kairi), Nobuyo’s younger sister (Matsuoka Mayu), and the frail grandmother whose monthly pension keeps everything from falling apart. The musty hovel can hardly fit all of the life that’s stuffed inside of it; random boxes and old toys are scattered in every direction, as if everyone would rather live in the mess they’ve made than dare to remember all the things they’ve lost. Even if Osamu and Nobuyo had the time to screw around, there’d be nowhere for them to do it.

But they love each other, and find other ways of expressing the bond that exists between them. “We’re connected by our hearts,” Osamu says with his impish grin, laughing it off, burying the thought somewhere in the ever-growing mountain of priceless junk that his family hoards in their apartment. He might be in denial, but he’s not wrong.

The Shibatas are connected in any number of different ways: Love, money, loneliness, scars, money (money deserves to get mentioned twice). Also, petty thievery: Osamu and Shota have fun stealing things together, the duo sharing an adorable fist-bump before every robbery. And it’s good that the Shibata has so much in common, as all of those various binding agents will be put to the test over the course of Kore-eda Hirokazu’s miraculous “Shoplifters,” among the very best of the writer-director’s delicate, deceptive, and profoundly moving dramas about the forces that hold a family together (or don’t). Gingerly recovering from an ill-advised foray into genre fare, Kore-eda returns to the well-shaded humanism that has established him as one of the most potent filmmakers of the last 25 years, and also — for that matter — to the aching parental anxieties that have often inspired people to think of him as Ozu’s heir. And yet, “Shoplifters” is sharpened with the killer instinct that’s been lacking from some of the popular Japanese auteur’s recent work.

While much of its first half continues the easygoing vibe of “Our Little Sister,” and the heartrending melodrama of the second half is enough to trigger whatever lingering trauma viewers might still have from the ending of “Like Father, Like Son,” you’d have to go all the way back to the haunted social-realism of 2004’s “Nobody Knows” to find another Kore-eda film that stings like this one — that so lucidly vivisects the loneliness of not belonging to anyone, and the messiness of sticking together.

We meet Osamu (Franky Lily) and Shota during one of their little crime sprees, but the plot doesn’t really kick into gear until they discover a five-year-old girl named Juri (Sasaki Miyu) who’s been abandoned near their apartment. Juri isn’t the world’s most talkative kid, but the scars across her body speak volumes. It would almost be wrong of Osamu not to take her home for dinner, and it’s easy enough to appreciate why Nobuyo (Ando Sakura) suggests that the little girl stay for a while longer. It’s not kidnapping if you don’t ask for a ransom, right? Besides, there’s a certain emotional logic to the idea that things (and people) should belong to whomever loves them the most.

And the Shabatas love Juri. Hesitantly, but for real. Of course, it doesn’t hurt that she’s a natural thief — shopkeepers never suspect her, and when someone catches her in the act they punish the kid with free candy. Ultimately, however, Juri is as much of a catalyst as she is a character, as Kore-eda’s patient and generous screenplay uses her to inspire some reflection from the rest of her new family.

Most of all, Osamu is looking at Shota in a new light, and vice-versa. Why won’t the kid call him “dad?” Or let him attend public school? Each of these mysteries — and several more — is knotted together with such a light touch that it’s hard to believe how much we’re suddenly left to untangle when something goes wrong and the film shifts from a quiet slice-of-life story to… something else. Something painful and true and extraordinarily beautiful in its broken way.

A master of threading the needle between conflict and contrivance, Kore-eda manages to turn this drama inside out without every betraying its most resonant truth. If “Shoplifters” spends 90 minutes allowing us to soak in the everyday hopes and concerns of its characters, the last 30 minutes of the film twists them together and pulls them apart, wringing every last drop of humanity from the Shibata clan. Deep fissures of dormant emotion suddenly erupt into being, as every bit of stray pathos the film has collected so far is funneled through a brief monologue that Nobuyo delivers into the camera.

It’s an overwhelming moment in a series of overwhelming moments; only in hindsight, once the tears have dried, are you free to appreciate Kore-eda’s unfussy staging, or the gentle way he guides his actors towards the most shattering moments by allowing them so much dead space along the way. You can feel his cast finding their characters on screen, growing used to them like the smell of a house they’ve never visited before. They all have souls, and we get to see them bared.

“Shoplifters” may lack the vanguard formal ambition of Kore-eda’s “Maborosi,” or the soulful imagination of his monumental “After Life,” but what it lacks in newness it makes up in raw humanity. Never preachy or resolute, this is a haunting film about abandoned people, and the beautiful things that are lost and found between them — it’s a film that asks its audience to reflect on where they belong, and on what belongs to them. You don’t get to choose your own family, but family is still a choice that you have to make over and over again, each and every day.

This Article is related to: Film and tagged Cannes, Hirokazu Kore-eda, Reviews, Shoplifters